Matt Anoa’i, known to wrestling fans as Rosey and Kimo of Three Minute Warning, has died. He was 47 years of age.

As the son of Sika of the Wild Samoans, he is a part of the Anoa’i wrestling dynasty, and his younger brother is top WWE star Roman Reigns. 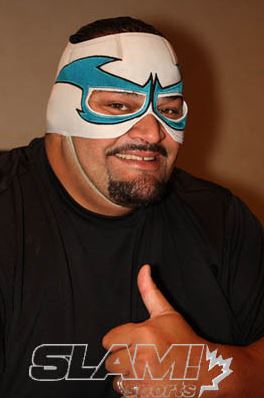 Matt Anoa’i as Rosey at a 2010 fan fest. Photo by Christine Coons

The Anoa’i family issued a statement:

“The Anoa’i family is mourning the loss of Sika’s son, Matt aka Rosey, due to an untimely death. We want to let his fans know that he loved them and the wrestling world so much. In his passing, he left three beautiful young children and a heartbroken family. Please respect the privacy of his children and family as they mourn the loss of this kind, loving, gentle man, who was a father, son, brother and a superhero to us all. Our family appreciates your prayers and continued support during this very difficult time.”

Born April 7, 1970, in Samoa, Matt grew up on the road, traveling with his famous father and uncle, a “gypsy life” as he called it, after the Wild Samoans started wrestling in 1975. There would be different schools on a regular basis as the team switched territories, and plenty of confrontations in the schoolyards as classmates complained about the vicious wrestlers. He attended the University of Hawaii, studying graphic design.

Despite the lineage, in interviews Matt Anoa’i usually talked about a desire to become a professional football player, and when that didn’t work out, he eventually came around to the idea of following in the footsteps of so many of his family. He began training in the backyard of the family home in Pensacola, Fla.

“There wasn’t really any pressure for me, it was more of a renewed confidence, not so much as the fact I had so many contacts in the wrestling business, in our family we always helped each other, there was never a thought of oh my god I don’t want to be the only person that doesn’t make it to the WWE or something like that,” Anoa’i told Josh Modaberi of wrestling101.com in a 2013 interview. “We all just helped each other along and everybody kind of worked together and that is just the attitude we always had and I think that is the attitude that stays rich in my family and that has resulted in many Anoa’is and Fatus being in the WWE.”

Afa of the Wild Samoans ran a wrestling school in Allentown, Pennsylvania, and Matt polished his skills there, and in the associated promotion, WXW. The family connections did help immensely, as he got the opportunity to wrestling in Japan for FMW and in Puerto Rico, as well as in ECW in the Samoan Gangsta Party with Samu; Matt was Big Matty Smalls.

When Matt and his cousin Eddie Fatu — The Island Boys — signed WWE developmental deals, they were dispatched to Heartland Wrestling Association in Ohio, run by Les Thatcher.

“Matt spent a year with me in WWE developmental. His work ethic was such that every training morning I knew when I heard the front door of the gym open it was Mattie first through the door & ready to work as hard as needed,” wrote Thatcher on Facebook. “Matt gave my wife Alice away at our wedding at her request 15 years ago. He was a part of our extended family, and will remain so in or thoughts and prayers.”

In the summer of 2002, The Island Boys became Three Minute Warning. Eric Bischoff was the Raw general manager at the time, and during interviews he would mention “three minutes?” and the cousins, known as Kimo and Jamal, would attack whomever he said.

When that team had run its course, Matt was changed into Rosey, a “Super Hero In Training” (note the acronym, suitable for the WWE’s Attitude Era”), learning how to do right under The Hurricane (Gregory Helms). They became a popular duo, and WWE tag team champions. For a time, Stacy Keibler went to the ring with them, in her own super-hero like outfits. (His tag team partner from Three Minute Warning would return to WWE as Umaga; he died in 2009.) 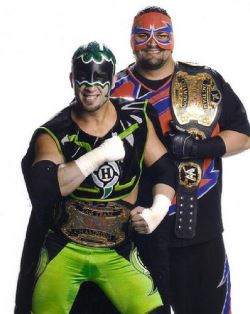 The Hurricane and Rosey.

“It was fun to do that because it was subtle change from what I’d done throughout my whole career,” Anoa’i told Modaberi. “We’re in the entertainment business and if you can’t adjust or adapt to something you’re not in the right place, the worst thing that I could have done is not try. It was something different and I did get excited about it, I wasn’t too pleased with the outfit or at least the super hero in training outfit but sometimes your do something and try to make it work, if they throw us a curve ball we try and hit a home run with it. When we won the Tag Team titles that was an exciting feeling, although it wasn’t with a family member like it should have been, I was more than happy to win those belts with Shane.”

On Twitter today, Helms wrote “My partner. My friend.” He also described the moment he heard of Anoa’i’s passing. “Heart wrenching phone calls are not the way to start a day. Tell your loved ones you love them. Let them know!”

Matt Anoa’i left WWE in 2006. His weight had ballooned to 386 pounds. In 2007, he was a contestant on the ABC show Fat March, about losing weight through walking; he didn’t finish the season.

He did, however, make a point of explaining why he’d been released from WWE, and ABC press material explained that WWE “officials felt he was too heavy, and it wasn’t safe for him to compete.”

Besides working on the independent scene, he also performed in All Japan Pro Wrestling as Ro’Z.

His name came up often in recent years, as his younger brother by 15 years, Joe Anoa’i, rose to superstardom in WWE.

Colleagues remembered a good person after learning of his passing. 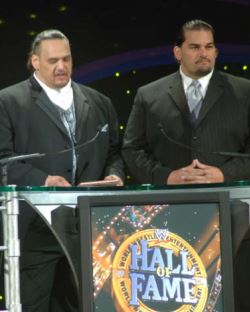 Two of the sons of the Wild Samoans, Samu and Rosey, introduce the team into the WWE Hall of Fame in Detroit in 2007. Photo by Mike Mastrandrea

“Being friends with Matt Anoai made me a better person in the ring and outside of it,” wrote Mike Bucci, who was Nova and Simon Dean. “RIP my friend. One of the best professionals I’ve ever had the pleasure of being around.”

Rory McAlister of The Highlanders had a similar sentiment. “I just learned of the passing of Matt Anoai. I don’t know where to start,” he wrote on Facebook. “I am heartbroken for his children. I can’t even imagine. Matt was good to me, was a great guy and had a great sense of humor. The world will miss him. I will miss him and so will everyone that ever had the pleasure of knowing him.”

Michael Manna, known as Stevie Richards, wrote that he “will cherish our Madden tournaments on long drives and in the hotels.”

Details of his passing on April 17, 2017, have not been released, though a 2014 health scare with heart failure and atrial fibrillation hospitalized him.

Besides his father and uncle, who are in the WWE Hall of Fame (introduced by Matt Anoa’i and his cousin Samu) and the Professional Wrestling Hall of Fame, and his brother Roman Reigns and the extended Samoan family, Matt Anoa’i is survived by two sons, Jordan and Koa, and daughter, Madison. He was divorced from Amanda Vandeberg Schall.