Her passion for wrestling hasn’t wavered. Her skills have not diminished. She is stronger, leaner, and faster than she has ever been.

But something still seems off. 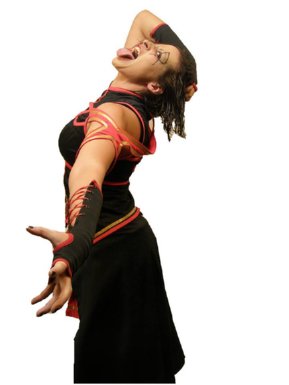 The Winnipeg native has always been quirky. For years, she has delighted fans not only with her wrestling but with her charisma and energy — her dancing to her entrance music “Bad Medicine,” her smiling interaction with the fans, and her overall upbeat, carefree demeanor. These are some of the qualities that have helped her become an international star, having held the Bellatrix (England) championship, the NCW Femmes Fatales title, and becoming a top contender in SHIMMER — and heading to next weekend’s tapings in Chicago.

But that easy, breezy attitude has been replaced by something darker, more sinister. And it was because of Cherry Bomb.

Cherry Bomb started her pro wrestling career in 2005. Rush debuted a few years later in 2008. Over the past seven years, the two have clashed dozens of times, two wrestlers whose individual orbits inevitably pull them into alignment every few months.

On August 23, Rush and Cherry Bomb clashed once again, this time in a tag team bout for SMASH Wrestling in Toronto. Rush and partner Vanessa Kraven defeated Cherry Bomb and Kimber Lee, but when the match was over, The Kimber Bombs attacked and laid out their opponents. Then, in an act fueled by jealousy, disdain, and disrespect, Cherry Bomb produced a pair of scissors and began cutting off handfuls of Rush’s long black hair.

Rush hasn’t been the same since.

“It’s not our hair whose loss we mourn. It’s our innocence,” Rush said after a recent match, her right hand sweeping through her shortened locks, her eyes trained off one some invisible point in the distance. “We have been watching our innocence die for quite some time now, as we listened to those who cheer the actions of those with no morals, no honor, no hesitation to take, and take, and take.”

Cherry Bomb’s humiliating attack was just the latest in a series of injustices, Rush said.

In SHIMMER, her former tag team partner Sara Del Rey deserted her, leaving Rush to fight all alone. Her subsequent partners, Evie and Heidi Lovelace, went on to team with each other, leaving Rush as the odd woman out. In NCW Femmes Fatales, her championship reign ended when LuFisto inserted herself into a title defense against Saraya at the last minute, changing the dynamic of the match and putting Rush at a disadvantage. In Bellatrix, Saraya and Liberty collaborated to take her championship. In SMASH, she was singled out by Vanessa Kraven at the end of the 2014 CAN-USA Classic when Kraven sneak-attacked her just to make a name for herself at Rush’s expense.

Even her own body betrayed her. She suffered a broken collarbone in 2013, robbing her of invaluable time and momentum.

“Every time we stepped foot in that ring with the intention of staying true to ourself and fighting for what we believed in, and then (the fans) cheered when Kraven kicked us in the face,” said Rush, who has begun referring to herself in the plural tense. “We put our body on the line to settle things with Kraven in a chairs match and they cheered when Kimber Lee and Candice LeRae ran out and attacked us from behind. They cheered when Cherry Bomb cut off hunks of our hair. Now do they see what they have unleashed? Do they now see the entity that has spring forth from the depths of our bitterness and pain to dance and revel in the chaos it creates?”

“It doesn’t surprise me one bit that she’s gone off the rails. I’ve been telling people she’s crazy for years.” — Cherry Bomb, when contacted to offer a comment to SLAM! Wrestling on Courtney Rush’s new attitude.

If Rush had gone “off the rails,” as Cherry Bomb suggested, that might be the end of the story. A wrestler grows increasingly paranoid after a serious of unfortunate events. It happens. But this doesn’t seem to be a classic crack-up.

At SMASH Wrestling’s CAN-USA Classic on September 13, Rush faced former TNA Knockouts champion Jessicka Havok. Team USA had already clinched the US vs. Canada series, but Rush was fighting for pride. Rush and Havok delivered an incredible match, a bout that saw Havok mercilessly batter Rush — inside the ring and outside the ring — and Rush miraculously will herself on for more. At one point, Havok blasted a kneeling Rush with a roundhouse kick to the chest, folding Rush backwards. Rush lifted herself back upright, similar to The Undertaker sitting up when it looks like all hope is lost.

And for every stiff punch, kick, forearm smash, and slam Havok rained down upon her, Rush rallied back with her own stiff punches, kicks, smashes, and slams. She fought the monster at the monster’s own game and she won.

In addition to winning that match, Rush was named the “Outstanding Wrestler” of the night, marking the second consecutive year she has won that designation at the annual CAN-USA event.

Rush hasn’t gone mad, though her odd diatribes and her new habit of referring to herself as “we” might suggest otherwise. And she’s not necessarily just engaging in some type of psychological warfare, playing the fool in order to lull Cherry Bomb into a false sense of security for when she gets her inevitable next match against her longtime rival.

Rush might be tapping into something deeper, something primal.

The happy-go-lucky Courtney Rush achieved a level of success. This new, unpredictable and vengeful version of Courtney Rush might be able to take things to a new level. It may be the key to her greatest success.

“We are become the true Courtney Rush. We are ruthlessness and violence come to life,” Rush said, finally raising her eyes to make eye contact with the reporter, a twisted gleam twinkling within them. “We will take every attack done to us and return it tenfold upon our enemies. And Cherry Bomb, Cherry Bomb will look into our eyes and see the darkness that stains our souls.

“And then she will know that the pain has only just begun.”