MONTREAL – So many thought it wouldn’t catch and after a few shows that the idea would be abandoned. Well, guess what? Saturday night’s Femmes Fatales show was the 15th and not only is it as strong as ever, its popularity keeps growing. 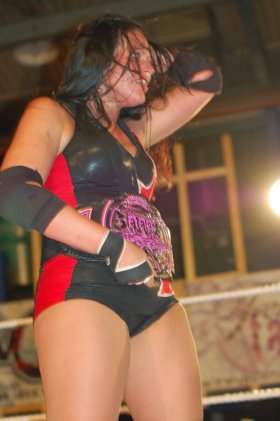 Courtney Rush is the new champion in Femmes Fatales. Photos by Karen Broadway

Ever since the original show, on September 5, 2009, which was the brainstorm of the Northern Championship Wrestling and Stéphane Bruyere, the goal was to present high-quality all-female wrestling shows for the whole family with some of the best female grapplers in the world. In the process, they were hoping to give more exposure to Quebec’s local talent. Since opening, Femmes Fatales has made partnership deals with well-established female promotions such as SHIMMER. Every event is available on DVD and is distributed throughout the world and it also has deals with Highspots.com and ClickWrestle.com. Many stars have already performed in its ring in the past shows such as Amazing Kong, Ayako Hamada and former WWF Women’s champion Jazz. Femmes Fatales regularly welcomes international talents. 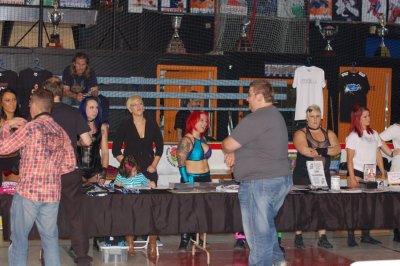 Pre-show, the stars of Femmes Fatales meet the fans.

Its reputation has grown globally as this writer was often asked about Femmes Fatales at the last Cauliflower Alley Club convention this past June in Las Vegas. Femmes Fatales also gets many requests from female wrestlers about being on their show. Usually a sign of greatness and growth, only the future will confirm if the trend is on the up and up. 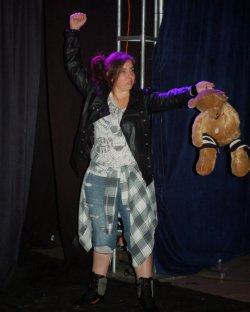 Add to that the technical brilliance from the video and lighting crew and the end result is a can’t miss event. And with RDS’ TNA commentator Jean Francois Kelly as master of ceremony, all the elements for a long run are in place.

The show on Saturday night, at the Centre LGH in Montreal, got off with a match between Missy and Kimber Lee, who was recently featured on SLAM Wrestling. Although appearing to be a blonde bombshell, Lee is pure evil in the ring, whether with her opponents or the crowd and after a furious exchange of chops which could be heard outside the venue, and many exchanges with the fans, not in a constructive way, Lee won her natch. 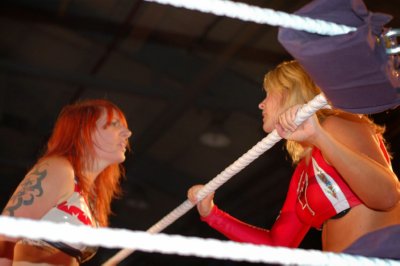 That was followed by a tag team affair featuring Addy Starr and Kaitlin Diemond against Mary Lee Rose and her partner Pink Flash Kira. Although the match was very good, most of it consisted of Diemond screaming wrestling lessons at her partner Starr, and after Starr got pinned, Diamond took exception to it and accused Starr of being the only reason for the defeat, and inferior wrestling skills, and after slapping her a couple of times, Starr finally put Diemond in her place and stunned her while leaving to the cheer of the crowd. Could we see them two against each other in the next show? 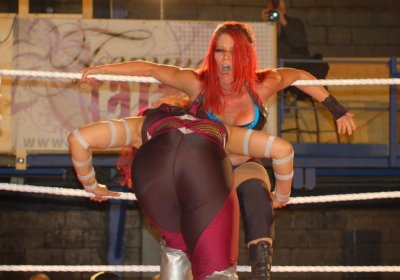 The next match had Sassy Stephie, accompanied by Mademoiselle Rachelle, against veteran Quebec grappler Vanessa Kraven, who lead most of the time with sheer power against her opponent, even though Rachelle did her best to interfere any occasion she could. Kraven did win to the delight of the fans. 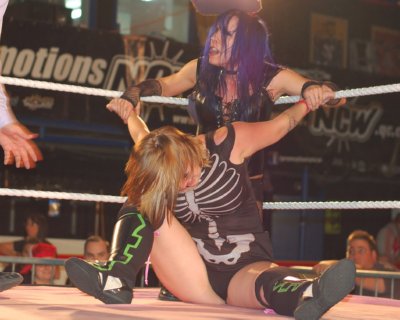 For the first time in Femmes Fatales’ history, a gauntlet match had Angie Skye, Diana Hall, Veda Scott, Mistress Belmont, Xandra Bale, and Portia Perez participating, with the winner choosing her match and opponent at the next Femmes Fatales show, whether a dream match or for the International championship belt. This was pure madness as the six opponents gave the fans what they expected: non-stop action, screams, and pure enjoyment. The winner was Portia Perez, a veteran of international wrestling and who will announce at the next show which opponent and match she has picked. The buzz is she’ll want a shot at the championship belt, a title she hasn’t be able to win yet. 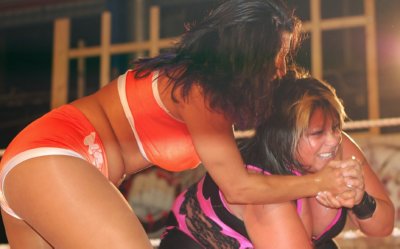 Sweet Cherrie struggles in the grasp of KC Spinelli.

The semifinal match had KC Spinelli up against Quebec’s “golden child” Sweet Cherrie, a favourite of the crowd and veteran grappler. In a match that started with a bit of comedy but rapidly turned brutal, Cherrie walked away with the win, pleasing the fans. 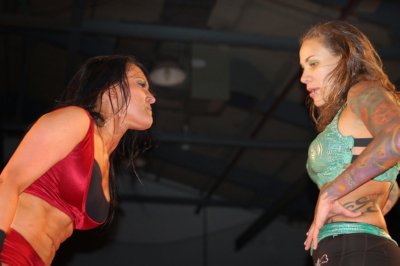 And then there was the finale of the evening. And what a finale it was. This match was worthy of any major league, men or women, as it had SHIMMER champion Cheerleader Melissa, Women Superstars Uncensored champion LuFisto, NCW Femmes Fatales International champion Mercedes Martinez and Courtney Rush. The action was furious in and out of the ring, and even into the crowd at one point, with Melissa and LuFisto eliminating each other, leaving reigning champion Martinez and Rush to battle for the belt. And so they did for a long time, going at each other brutally until the referee was knocked out. Martinez then used Rush as a punching bag, and tried to revive the ref, mistakenly assuming Rush was almost out. Rush rebounded, putting Martinez in a camel clutch type move, and hitting her head on all four turnbuckles, and finally taking it to the middle of the ring where Martinez eventually tapped out and giving Courtney Rush the championship.

There is no telling where Femmes Fatales is heading, but if last night’s show is any indication, the sky is the limit. The local and international talent keeps knocking at their door and is making this scene a very sought after federation for women’s wrestling. The next show is October 25.