Just two days ago, Canadians got their first taste of the WWE Network, opening their eyes to a plentiful resource of material from wrestling’s past, present and future; and for one Canadian Diva, Natalya, the arrival comes with much anticipation for what her family has seen while residing south of the border.

“I’m excited that you guys have the opportunity to experience what we’ve had over the past few months with the WWE Network,” she said during an interview earlier this week. 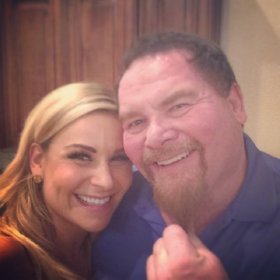 “There’s so much, it’s overwhelming. My dad (Jim Neidhart) was over until four in the morning once just watching [the Network]. I had to kick him out!” she said with a laugh. “He was watching all of his old matches. And that’s the thing — you get lost in it because there’s so much.”

The Anvil isn’t the only one who watches back his old footage. Nattie admits that she and TJ have gone back to watch some of the matches they grew up with.

“TJ and I are obsessed with wrestling. We love what we do, we’ve had a passion for it since we were children, so it’s fun to go back and watch Bret vs. Owen at WrestleMania X or find a Shawn Michaels match that no one knew existed. TJ was talking to Billy Kidman the other day and talked about when he [Kidman] wrestled so-and-so in WCW, and Kidman’s response was, ‘I don’t even remember this!'”

Natalya also commented that the WWE Network footage has been great for her and Wilson as they’ve been able to study material from the past and gain inspiration for their upcoming matches.

“It’s a great tool for us to learn too,” Natalya continued, “because we can go back and say, ‘You know what? I want to channel this person or this person inspired me.’ When go in the ring and I think, ‘I need to bring it, I need to take this up a notch,’ I think about Arn Anderson. I think about watching his footage. I was watching Arn’s footage with the Four Horsemen, just his interviews alone were phenomenal, and I was thinking to myself that everyone wanted to be Ric Flair, but I wanted to be Arn Anderson.”