There can be a lot to a name. When the Ontario-based rocker-chick wrestler P.J. Tyler switched to Courtney Rush, it marked a change in her confidence level in the ring.

“It feels more polished. It feels more like a statement. The way I describe it, Courtney Rush is the rock star; P.J. Tyler was the groupie,” she said.

Or, as she put it on her Facebook page, “Rock N Roll Goddess becomes Queen of the Squared Circle! Ladies and Gentlemen, if you think PJ Tyler was all about rock N roll, you ain’t seen nothin’ yet! Now that I’ve shed that ratty stuffed-toy name … I’m all set to let my unchecked, raw self shine forth in full blown Rocker Rage! I’ve got nothing to hide anymore; just wait and see what’s been unleashed on the women’s wrestling world!” 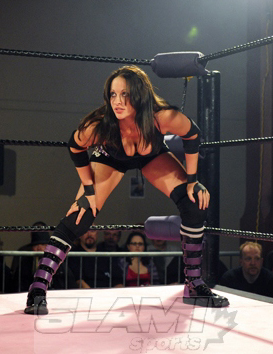 Courtney Rush is ready for action at the NCW Femmes Fatales show in June 2011 in Montreal. Photo by Minas Panagiotakis, www.photography514.com

Indeed, the 27-year-old is ready for more, having recently cracked the SHIMMER roster and gotten a shot at a semi-main event position at the most recent NCW Femmes Fatales show in Montreal.

“I try to learn from everybody. Being able to go down to SHIMMER and work with Daizee Haze was massive for me. Just getting booked for that match from certain people that felt that I deserved it was really a big confidence boost,” she said, admitting that only over the past half-year has she has “found the confidence that I was trying to find for the past three years.”

In Montreal, she faced SHIMMER champ Madison Eagles. The woman behind the Femmes Fatales promotion is LuFisto (Gen Goulet).

“LuFisto took me aside for that one. She said, ‘Listen, you’re going on semi-main. I want you to go for it, take this. I have confidence in you.’ That was really big for me, that they knew that I could take that ball,” said Rush.

“At Femmes Fatales, we always do our best to push the girls who really want to succeed. Rush has been perfecting her craft a lot in the past year — as well as her physical condition,” said Goulet in an email. “I believed that giving her such a great opponent would help her push her limits, learn from this match and give her more experience so she can become even better.”

Eagles was willing to offer advice as well, said Rush. “I learned a lot from her. Obviously, there’s a lot of things that I don’t know yet. Even as the match was progressing with her, I was learning about adapting to whatever situation happens, pacing, and all these other fun things that you can’t teach,” she explained.

Jake O’Reilly has known Rush for years, including the early years in Windsor, and has seen her growth.

“She came out of wrestling school the most athletic and talented girl on the scene. She had to become instant veteran,” said O’Reilly in an email. “In only a few short years, I think her greatest improvement has been filling the shoes of a ring general way before her time. And now with her inclusion in shows like SHIMMER she will finally get to wrestle girls who are veterans who can teach her — likely by kicking her butt all over the ring.”

Originally from Stonewall, Manitoba, just outside Winnipeg, Rush had a buddy in high school who was into wrestling, and they were the only two “out” about it. They always dreamed of wrestling. Her friend went to a single class at a gym and was told she could have a match the next day. Both decided the school was a little sketchy, so put off training until after university.

After taking film studies at the University of Manitoba, then working on a few sets, the wrestling bug set in again.

“Once I finished university, I was like, ‘You know what? I kind of want to go back to trying it again, because I’m not doing anything that I really care about right now,'” said Rush.

Researching online, she saved her money and narrowed her choices to Scott D’Amore’s school in Windsor, Ontario, and Lance Storm’s school in Calgary, Alberta.

“Windsor just worked better,” she said, heading east, where her primary trainers were Tyson Dux and Johnny Devine, but D’Amore was in there as well.

“It was very individual focused. Tyson, in particular, is very good at figuring out how people learn differently and training you accordingly,” she said.

Almost immediately after beginning training in May 2007, she was hurt hitting the ropes. “I put my vertebrae right out, I had to go to the chiropractor and put that right back in. What that boils down to is I didn’t have the muscle mass that I needed.”

She went to the gym with Dux to learn how to work out properly.

Rush admitted that starting later, at 23 years of age, was a plus and a minus.

“I honestly feel it’s a better thing that I started late, because I wasn’t an 18-year-old impressionable kid. You hear a lot of stories about new people getting lost in the world of wrestling. … I know that I knew myself better at 23 than I did at 18. I had my feet on the ground a little bit better and I didn’t get carried away,” she said.

But those feet didn’t always work right, said her trainer.

“When she first started, she had no body control but seemed to have athletics,” Dux recalled. “When you first looked at her, she looked like a fish out of water when it comes to pro wrestling. It took me a full week to teach her to roll to her feet properly.”

Eventually, the 5-foot-7 grappler got the hang of it, and adapted to working in boots with two-inch lifts, just like Chris Jericho. “It’s a Winnipeg thing,” she joked.

Her first match, in Belleville, Michigan, in January 2008 came after about nine months of training.

“I was terrified. I thought Scott was joking actually when he told me,” she said.

She explained the P.J. Tyler moniker. “I’m big into music and one of my favorite bands is Aerosmith, so Steven Tyler.” P.J. was thrown in, and she’s not really sure why. “It wasn’t anything I ever intended to keep, but I wasn’t going to change it until I found one that I did like. I didn’t want to change my name 15 times.”

It wasn’t only her name that switched through the years, but her in-ring style and her clothing as well.

“I try to work on it, and change it,” she said of her in-ring style. “When I started around here, the girls were bigger than me, so I was working more of a high-flyer style. Now all the girls are smaller than me, so I’m changing more into a stronger, technical style.” 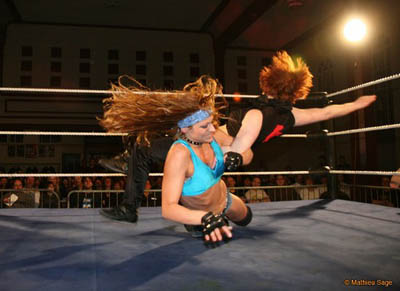 With her hair colour changing on a whim, her clothing changed as well.

“Earlier, I just kind of went with how I felt and what would work. I’m waitressing, not exactly the most highest-paying position, so I only recently just got gear made,” she admitted. “My first set of gear, the black shorts, the top with my name on the side, it’s the very first one I had made. I was making a few. I got a couple of tights from other people that they weren’t using anymore, and I altered them to fit me. But that was the first pair I’ve gotten made and now I want more!”

In the ring, she is always aiming for the next level.

O’Reilly sees big things for her ahead. “I personally could see Courtney excelling in Mexico or Japan. She is an athlete in a sport where too few women actually are athletes. Japan and Mexico are still places where being a real athlete matters,” he said. “That being said she could fit into a role as a WWE Diva or TNA Knockout if called to do so. Although I don’t see pillowfights and mud wrestling on Raw being on a list of her ‘to do’ items.”

Dux can attest to her progress.

“I think it was a matter of a young girl gaining confidence,” he said. “She is getting better in big strides every time I see her now.”

But confidence doesn’t mean the elimination of the excitement and rush of working in front of the crowd either.

“It’s the kind of [rush] that makes your hands shake afterward, and you can’t believe that you got to go out there. I’m constantly, if I’m talking after a match, my voice will start to shake, because I’m like, ‘Whaaaa, wait a second, I want to go back out there, they’re not done cheering for me yet — or booing me.'”

She is awed by the loyalty of the fans of women’s promotions, admitting that she checks out the message boards on a regular basis.

“I really like the attention that it’s getting by people who legitimately come across like they want to see female athletes rather than girls just jumping around the ring,” Rush concluded.