BUFFALO – The WWE rolled into Buffalo for Monday Night RAW and the show was appreciated by the vocal crowd. The large number of children in the audience echoed the direction of the current WWE product as they cheered for the good guys and booed the bad guys.

Large sections of the arena’s upper level were blacked out on the hard camera side. There were many people in attendance, it was not a sell-out. 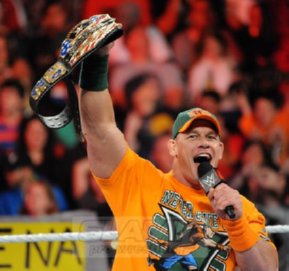 While watching the matches I was surrounded by young families, Ontario wrestler “The Professional” Jaxon Jarvis and PWI’s Dan Murphy. The crowd reacted strongly to John Cena and the New Day.

As usual, the crowd was split about Cena, with the kids cheering for their hero and the older folks booing the face of the WWE. The New Day was the most entertaining aspect of the show. Xavier Woods showed his athletic talent and huge personality off in his encounter with Cena. Big E’s dancing and gyrations made the crowd chuckle.

Perhaps the most impressive moments of the night came from the Bellas and Alicia Fox as they worked over their opponents’ back and neck. With a slew of short slams, headlocks and snap suplexes the ladies were able to tell an effective story with their precise moves. The quality of the match was supported by the crowd as all six women, Charlotte, Lynch and Paige, captivated the live audience. When was the last time a wrestler worked over a particular body part for an entire match? Nice job ladies.

Fans Loreal and Ashley, both 25, loved being at Monday Night Raw. The two New York state natives have been fans since they were 13. “I love the noise!” said Loreal. “Now I watch them live and I can go crazy.”

Her friend Ashley was just as passionate, but, a little more subdued with her son in tow. “I like the live excitement!” said Ashley. “I brought my son and he is a big John Cena fan.” The little guy was tickled to see his idol in person. “Whatever makes him happy makes me happy. He is so excited but a little shy.”

Sitting with “The Professional” Jaxon Jarvis was enlightening. He is a lifelong WWE fan and a keen observer of the nuances of the wrestling ring. At the conclusion of the Mark Henry verses The Big Show match he wondered if they WWE might consider using jobbers again. I agreed with the grappler as it seemed a shame to pin Henry in just a few minutes and the former World Champion barely got in an offensive move. Would they have done that to Pedro Morales or Bruno Samartino? I don’t think so.

“The Cena open challenge really got the crowd into the show!” enthused Jarvis. “Stardust and Neville was awesome too.” The crowd response is what Jarvis was looking for on this evening. “The WWE had the people out of their seats for most of the show and that was very professional.” 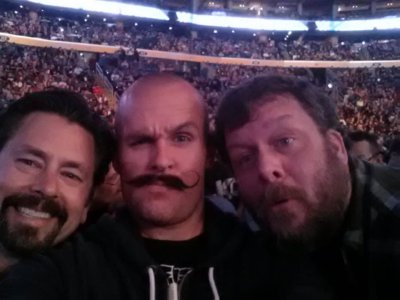 My only disappointment was getting to see Kevin Owens wrestle for just a few minutes before joining Rusev in a beat down on Ryback. Owens is such a dynamic performer and the crowd responded so positively to the Quebec grappler that it became apparent that the WWE might have trouble keeping him a heel for any length of time. The people relate to him.

Overall the night of wrestling was a lot of fun. The families around me had a good time and my comrades were enthused by their RAW experience. It was a positive night for wrestling fans and the WWE.

Caleb Smith enjoyed attending the matches with Kerry Flestead and Jaxon Jarvis. The real hero of the night was the usher who lent Caleb his pen after his own pen went dry. Thank-you sir.