September 10th was our chance to go say goodbye to Frenchy Martin, who died on Friday. The idea was to collect Pat Patterson and drive from Montreal to Quebec City for a NSPW wrestling show, where Pat could sell his autobiography. Pat was reluctant to go at first — yet another card after 50 years in the business — but with the chance of seeing Frenchy for a final time, then he had to go.

We arrived at Frenchy’s hospice and met with Rick Martel. Frenchy was the best friend and tag team partner of Rick’s old brother Michel. When Michel died suddenly in Puerto Rico, Frenchy became like a brother to Rick. So it was important for Rick to go and see Frenchy as many times as he could. 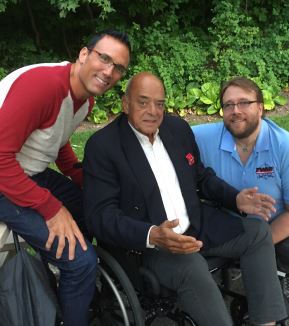 Frenchy was waiting for us, sitting in his wheelchair, smoking a cigarette (why quit at this point, right?!). He looked better than we could have imagined. He was tanned, and hadn’t lost too much weight since the last time we saw him. He was also dressed like a champ, smiling and so happy to see old friends. That wrestling brotherhood can be very beautiful to witness on occasion.

The next 30 minutes were simply pure magic. Rick, Pat and Frenchy started to tell one story after another. Most of them ended with a huge laugh, but unfortunately, we can’t write about all of them here!

Frenchy was a known joker in the business. It wasn’t about doing pranks or ribs. It was about doing something to get a laugh out of the guys. He was always entertaining the boys, especially at airports.

There are two classic scenes for which he’s famous for among his peers. Frenchy would come close to the baggage carousel, in motion to pick up his suitcase and he would take a big bump on the carousel, head-over-feet! He’d then stay on it and make the full run on his back, making sure along the way that all the boys had first row seats to the spectacle. Once he’d get his luggage, he would open it a little, then fall in the alley with his suitcase bursting open. What was in it? A giant dildo that would make anyone blush! Frenchy would just excuse himself to everyone in sight, trying to put that enormous thing back in his suitcase.

Rick and Pat said that the boys often waited for Frenchy to do his show. It was part of life on the road. He was a true performer, in and out the ring.

Talking about life outside the ring, Frenchy once decided to make a joke to someone visiting a friend of his. He took a big knife, turned it upside down and sliced that person’s arm. Frenchy thought it was a regular knife. Little did he know, it actually was a double sided knife! The poor guy was pouring blood! Never to be seen again, he stayed away from Frenchy for the rest of his life, thinking he was just some crazy, crazy man! Of course, everyone else there ended up laughing about the whole thing.

Frenchy was not only a joker but also a mercenary. And it wasn’t only a gimmick, as in his tag team with Michel Martel. He meant business.

The Killer Bees once booked wrestlers on a tour in Asia for a promoter there. The shows were only drawing 400 fans in some much larger venues. Fearing the guys would get stiffed on payoffs, Frenchy started to buy custom-made suits from a friend of the promoter against his future earnings from the tour. After all, wrestlers need to be dressed like professionals. After a few suits, Frenchy decided to ask for advances, $500 per shot. Well, after the tour was over, the boys went to Frenchy to ask him if he would join them to hire a lawyer and sue the promoters. And in typical Frenchy fashion, he answered that he actually got paid, that he was not interested and that he was leaving for the airport! Nobody got paid for that tour. Nobody but Frenchy, of course!

He knew right away that with such poor houses, money would be an issue. So he acted in his best interest way before anyone figured out that something was wrong. Yet, he was very insightful about how this business works. He had told us in the past, “Some guys, they always want to know whether they are going to win or lose. If you get a few hundred thousand dollars along the way, it’s not really that big of a deal. You can’t asked to be paid and doing it your way on top of it.”

Frenchy knew how to get paid but he knew how to spend that money too. With this awesome trio, our role was to listen, laugh and take mental notes. But we made sure Frenchy told our favourite story one last time for the benefit of Pat and Rick.

Here’s how it goes. Frenchy was working in Japan for Giant Baba. Since Frenchy was also there to enjoy his time in the Land of the Rising Sun, he asked for advances on his pay every day. At the end of the tour, the road agent was paying all the boys and when he got to Frenchy he told him:

It’s our official Frenchy story. That describes him so well! We’ll be laughing and telling that one forever.

But all good things must come to an end.

We took some pictures, and said our goodbyes to Frenchy.

It’s really a weird feeling when you know you are saying goodbye to someone for the last time. You don’t really know what to say, or how to act. We simply thanked him for everything.

All those legends from the Montreal territory have given us so much, but nothing is more important to us than the fact that they have let us behind the curtain, so we could meet the real people behind the characters.

Frenchy (people stopped calling him Jean a long time ago) gave us a very good and different interview for our Mad Dogs, Midgets and Screw Jobs book many years ago, even if he tried to bribe us so he would rank higher than 21 on our list of the best Quebec wrestlers of all-time. He then came to our two book launches, in English and French, taking pictures and signing autographs for every fan in attendance. But most of all, he had a blast meeting some old friends while telling stories and drinking beers.

In March 2015, we brought him to a convention and he got to meet many fans there. That’s when he told us he was diagnosed with a bladder cancer. Six months later, we called to check on him and he told us the cancer was now in his bones, that chemotherapy would only give him a few more months to live, and that he decided against it. He wanted to have a good quality of life for the time he had left. We called him back during the summer. Now in Quebec City (he used to live in St-Jean-sur-Richelieu) he told us that he would like very much to get together the next time we were going to Quebec City.

So when we said goodbye, we thought about all this and so much more. In a business where people are often bitter about being out of the limelight, left with little or no money, Frenchy was the exception. He blamed no one but himself and yet would not change a thing. He had a fun life and he had no regrets. He embraced life.

That final meeting will remain in our hearts forever.

Goodbye Frenchy! And wherever you are, please, be careful with double-sided knives!

Pat Laprade and Bertrand Hebert are the authors of Mad Dogs, Midgets and Screw Jobs, a history of wrestling in Montreal and the province of Quebec, which is known as À la semaine prochaine, si Dieu le veut! in French. They also wrote a biography in French on Mad Dog Vachon, and Bertrand is the co-author of Accepted with Pat Patterson. Both are long-time contributors to SLAM! Wrestling.