This morning, October 21, 2016, at 7:25 a.m. in Quebec City, Frenchy Martin lost his battle to cancer. He was diagnosed with bladder cancer almost a year ago, and elected not to pursue aggressive treatment. He was 69 years old.

Doctors started medication to make him comfortable a week ago, knowing that the end was near. His close friend Rick Martel passed on the news. 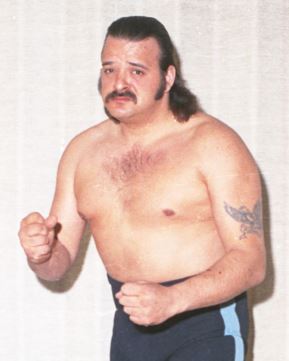 Martel and Martin were particularly close. “We’re like brothers,” Martel said in a chat with SLAM! Wrestling. “When I was a little kid, around Frenchy. Frenchy and my brother were together all the time. So I knew him. He’s like a big brother to me.”

He was born Jean Gagne on July 19, 1947, and broke into the wrestling business in Montreal in the early 1970s. Known as Pierre Martel, he formed a tag team with Michel Martel, Rick Martel’s older brother, known as the Mercanaries. When Michel Martel died suddenly in Puerto Rico following a match, Martin was catapulted up the card on the island.

In 2004, Gagne addressed his start in the wrestling business. He and Michel Martel both worked in night clubs in Montreal, with Martel as a bartender and Gagne a bouncer. Gagne had been out a few times to see his friend wrestle on undercards, and was entranced by stars like Jos Leduc and Maurice “Mad Dog” Vachon.

When Martel got his break to go on the road to Calgary and wrestle, he helped Gagne get booked as well. “I wasn’t really ready, but I still went,” said Gagne. “Two guys that were there that really did help me were Chin Lee, who was originally from Montreal, and Tor Kamata, who was from Hawaii.” His first-ever pro match was against Killer Kowalski.

But it was in Puerto Rico that he excelled. He had numerous runs with various titles, and was booker for different promotions as well. It all stemmed from Martel inviting him to Puerto Rico in 1975 to team. “We went down there and it was nothing but success because we popped the place right out. The Martel Brothers just kept on going a long time,” he said.

The island has “always been good to me,” he said, mentioning that his wife, who passed away in 2005, was from Puerto Rico, and two sons were born there.

“I booked a few times, a few offices that tried to get off the ground, but not the right TV, so it’s very hard to show your ideas on the Tuesday, and the guys show his tape on Saturday, Sunday,” he explained. “I would put a cage match, they had three cage matches; I’d bring two women, they’d have four women and six midgets.”

During his lengthy career, Gagne also wrestled as Don Gagne in the Maritimes and Stampede Wrestling, and under a hood as The Destroyer for a short while in Montreal.

In 1978, he gave a kayfabe-like interview to Garry Allison of the Lethbridge Herald while working for Stampede. An excerpt:

Don Gagne, a former “North American” champion and a wrestling “bad guy”, claims be likes nothing about the fans who pay his wages.

“There is nothing I like about them,” the battlescarred veteran of seven years in the pro business, and eight as an amateur wrestler, stated. “Everybody tries to do anything they can to me. They spit on me, throw things, stuff like that.

“I’ve had bad experiences with fans, certainly. In Puerto Rico I had my bead split open for six stitches. I went over the top rope and a fan stabbed me with a knife. In Japan I had a bottle broken over my head.

“I guess the fans just don’t like me, maybe they don’t in this area because I’m from Quebec.

“There’s a lot of things I don’t like about the fans. Personally I don’t like bad language, and women who swear and act like men make me mad. Then there’s the town toughie who’ll scream at me and call me names, but won’t come into, the ring with me. I welcome all challengers.

“I don’t worry about offending fans, even if they do pay to get in. I don’t think there are enough in Lethbridge to pay my money. We have a guarantee to come in here and its all done by contract.”

The Gagne name didn’t fly in the AWA, he recalled. In 1972, Gagne got booked in the Minneapolis-based territory and had a run-in with the promoter, Verne Gagne. “I wrestled under the name Don Gagne. He said, ‘Why are you using the Gagne name?’ I said, ‘F—, it’s my name.’ He said, ‘Well, I’m Verne Gagne.’ But I was just starting. I never went to Minneapolis either (laughs). I was never a good brown-noser from Quebec. … He was very cold with me, which I didn’t give a f—, because he’s not my style of guy anyway.” 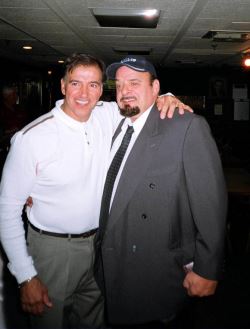 Rick Martel and Frenchy Martin in 2006. Photo by Greg Oliver

But it’s as Frenchy Martin that most fans know him, a scratchy-voiced manager to Dino Bravo in the heyday of the WWF in the late 1980s, waving the Quebec flag at ringside.

At the time, the WWF had raided the Montreal territory for much of its talent, including the Rougeau Brothers and Bravo. Martin explained how he ended up a manager. “I spoke French, I spoke Spanish, I speak English — not very good enough, but that’s what they wanted — I was from France, supposedly. I have an accent,” he said. “It did very good for me. It was very easy. Even though Dino, I met him at the hotel, and then I left him at the airport, we weren’t good friends, but we weren’t enemies. It was just business, that’s all. And Dino was business with a lot of people like that.”

In the summer of 1990, Martin retired from the road for health reasons and got out of the wrestling business. For a number of years, he worked as a security guard. Not long after learning of his cancer diagnosis, he moved to Quebec City to be closer to friends and family, after many years in Longueil and then St. Jean de Richelieu. He passed away on Friday, October 21, 2016.

He always had a good perspective on the wrestling business, and stayed involved to a degree with the wrestling scene in Quebec — especially after one of his sons started wrestling.

“It’s not an easy profession, to be honest with you,” Gagne said, summing up his career. “I was a nice guy, I minded my own business. I got in the ring and I always talked with the guy: ‘What would you like to do?’ The finish didn’t matter to me, if you win or I win, I could care less. Let’s just get the show for the people to be screaming, have them ready to pop them and then go home.'”