Mercedes Martinez is not for the faint of heart 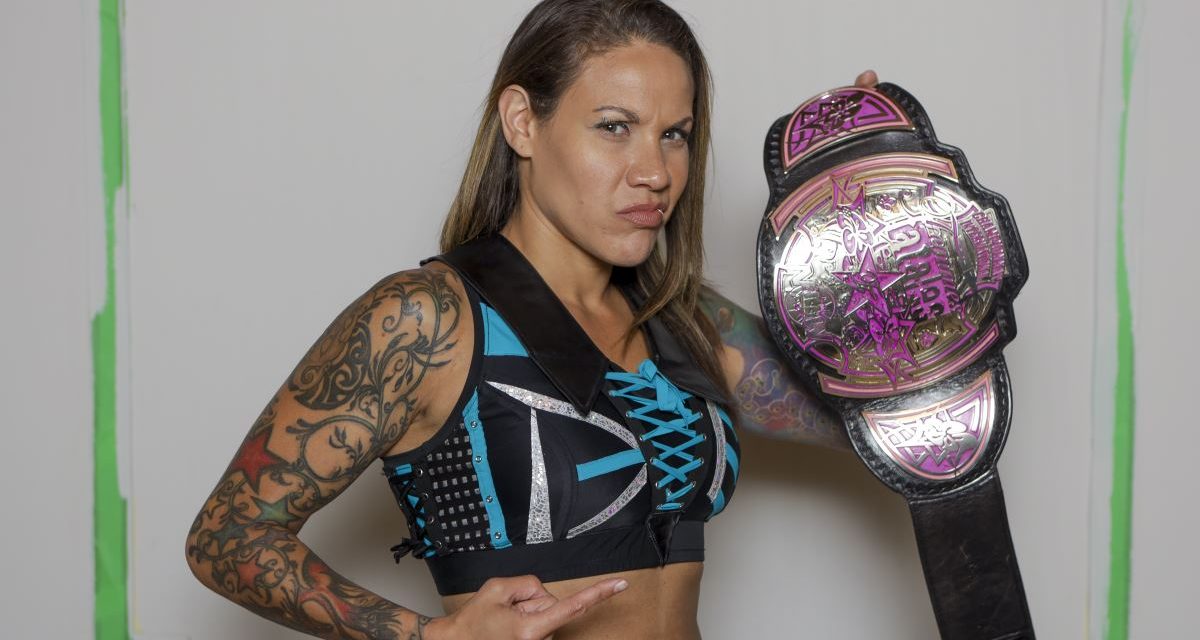 Not only has Mercedes Martinez dominated the women’s independent wrestling scene for the last 16 years, but she also has the distinction of putting fear in the heart of a wild Samoan! 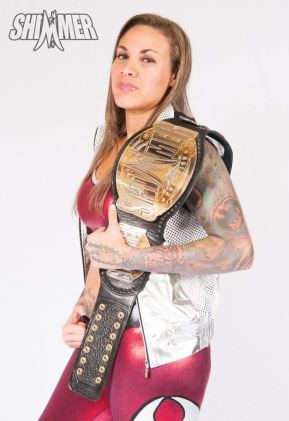 The 35-year-old Martinez, who stands at 5-foot-7 and weighs 145 pounds, has worked with professional wrestling legend Afa Anoa’i a.k.a. The Wild Samoan #1, for his company World Xtreme Wrestling (WXW) since 2002. In her early days with the promotion, Martinez quickly got through every female wrestler placed opposite her in the ring.

“I told her that she would have to sit out for a few months until we could get some new women to compete with,” recalled Anoa’i in an email interview with SLAM! Wrestling. “She said, ‘No Pops, let me take on the boys!’ Well, Mercedes proved herself by beating the Cruiserweight champion, becoming the first and only female Cruiserweight champion. The fans were so impressed by her tough wrestling style and her opponent, Kris Krude, was shocked by the ass whipping he received. After the match I remember saying to her, ‘BABY, you scare me, you work like a Samoan!'”

Hailing from Waterbury, Connecticut, Martinez didn’t grow up dreaming of becoming the wrestling force she is today. Although a wrestling fan, she was happily studying criminal justice on a full basketball scholarship when an injury on the court led her straight into a wrestling ring. Benched, but wanting to still keep her strength and conditioning up, a friend suggested she go to a local wrestling school to train until she was cleared to return to basketball.

Martinez wouldn’t return to basketball. After training for one month under the tutelage of Jason Knight, who at the time was also working with Extreme Championship Wrestling, Martinez had her first match.

“I didn’t go back and do basketball or anything,” revealed Martinez in a phone interview from Florida. “I finished my semester, but I never reapplied. I ended up falling in love with wrestling and it took off from there. College will always be there, but wrestling may not and with being so young at the time and the opportunities were coming to me so fast. It was just let me go along with this and see how far I can go.”

In her early days Martinez would wrestle around Massachusetts, New Hampshire and the Vermont areas. Her technical, methodical and strong style of wrestling quickly got her noticed and led to her working with promotions including SHIMMER, Ring of Honor, NCW Femmes Fatales, SHINE and stints to international locales including Japan, Australia, and England.

“I met Mercedes when she was brand new in wrestling,” reminisced Lexie Fyfe, who is retired from wrestling but is a backstage agent for SHIMMER, in an email interview. “I think I was one of her first dozen matches or around there. Even then, when she was so new to wrestling, you could tell she was going to make a name for herself. She was very intense and trained hard. I have always enjoyed wrestling against Mercedes. I felt she pushed me in our matches to be a better wrestler. Her chops though? I don’t miss those!” 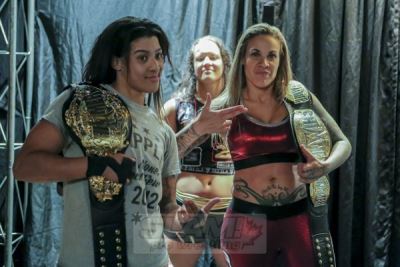 And in a world whose citizens have ever decreasing attention spans, Martinez managed to have not one, but two record-breaking Iron Woman matches to her credit. Both matches were for Women Superstars Uncensored (WSU) with the first being against Angel Orsini in 2009. The women battled for 70 minutes.

“It was phenomenal,” recalled Martinez. “Angel was a good friend of mine and we just tore into each other for over an hour’s worth of wrestling. Your body just isn’t prepared for that at all. Usually an Iron Woman match is 30 minutes (an Iron Man match is 60 minutes), we just kept going and going. We knew there was something special at that time that no one had seen in a long time. At the end it was just such an accomplishment to know that we had done something they hadn’t done on TV or pay-per-view.”

Never one to back down from a challenge, Martinez would wrestle for 73 minutes in another Iron Woman Match in 2011 this time against Lexxus.

“I obviously had to top myself the second time around,” joked Martinez. “The second time was a surprise. I didn’t think it was going to happen. We went in there and we beat the hell out of each other and I didn’t think it was going to be longer than 30 or 40 minutes at the most. They (the bookers) wanted a pretty long match as the main event and we just kept going until eventually we realized we were over our 60 minutes and it is just one of those things where you keep going. The fans wanted more. They wanted to see us keep going. They didn’t want us to stop. It just got to the point where we were so exhausted that eventually we just ended the match and then we realized that we broke the record by going 73 minutes! That’s an accomplishment in itself, knowing that the fans could be into a match over an hour and it was just amazing. I don’t even think males could go that long!”

Martinez currently holds both the SHIMMER championship and the WXW Women’s title. Her SHIMMER victory comes after she took a two-year hiatus to recuperate from a second shoulder surgery and a back injury.

As for her future, Martinez says she has aspirations for getting to the “big leagues” of wrestling, but she is bluntly adamant that she is NOT someone who would do anything to get on television or achieve fame. She has had tryouts for WWE including a televised Sunday Night Heat match against Victoria, but even though Martinez says the WWE referred to her as a “diamond in the rough,” no contract followed.

“I am very content with what I’ve done in my career,” insisted Martinez. “I made a huge name and a huge mark on women’s wrestling on the independent scene. My goal is to always be on TV and whether that happens or not is OK. I will still work hard and try to get there, but if it doesn’t happen it is OK.”

Stephane Bruyere, who first met Martinez when he was the former promoter/booker for NCW Femmes Fatales considers her to be a great friend and “the best female wrestler that has not been signed by any of the major promotions.” 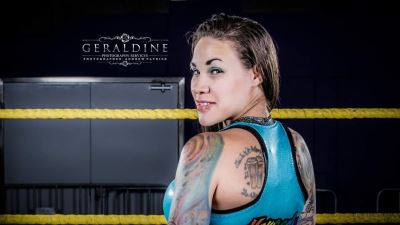 “She can do everything,” noted Bruyere, who is currently a backstage agent for SHIMMER, in an email interview. “She can put on a classic wrestling match or do grudge matches unlike anyone else. She can also work with everybody. Whether she is in the ring with a veteran or somebody new, she always gives 100% to make sure that her opponent looks good. She’s also a great leader to have backstage as she will give straightforward opinions to the wrestlers, yet she’s also the first one to ask promoters/bookers/agents if she’s done well. She’s also one of the best for cutting interviews, backstage or in the ring.”

With all the WWE’s recent attention, focus and push on their concept of a “women’s revolution” in wrestling, it was inevitable for Martinez to weigh in. She says this concept is nothing new to her and countless other female wrestlers who have been working hard honing their craft on the independent scene. It’s also not a new fad for the wrestling fans who support all-women promotions such as SHIMMER and SHINE.

“It’s nothing new for us,” shared Martinez. “We just don’t like WWE taking credit for a revolution when it’s been around for over 10 plus years. If you look back at SHIMMER, it is one of the premiere companies for the women’s revolution. We put talent and wrestling over being a diva and over T and A and the sexiness and the valet appeal. It’s more, we’re wrestlers! WWE finally said, ‘Hey let’s do this’ and the response that they’ve gotten is, it’s about time! I’m not bitter, it’s just about time you (the WWE) are grabbing talent that needs to be up there. It’s astounding that it took them this long to get there.”

Martinez will be wrestling KC Spinelli at SMASH Wrestling’s CANUSA Classic on Saturday, October 22. This all women’s show marks the first time ever that the two have squared off against each other.

“It’s always a humbling experience (being on an all-women card) because there are so many women wrestlers,” reflected Martinez. “When you work for certain companies, they put a women’s match as an attraction. When you go to an all-women wrestling show, we’re not just an attraction, we are the whole card! This is what people want to see, just female wrestling. We have come a long way and to still be part of women’s wrestling and women’s shows, shows me that I’m one of the top female wrestlers to keep being a part of these shows. There are hundreds of women wrestlers out there, so when I get that phone call saying, ‘Hey we’re running a women’s show and we want you to be a part of it,’ it humbles me and it makes me proud to know that hey I’m still relevant. I still got that ‘it factor’ to bring people to the shows. Promoters still believe in my talent. They still believe in me and I can give 100% and then some and entertain the crowd and bring in the fans.”