How can you knock a guy who “delivers the fist of justice to unruly villains?”

Inspired by the manga series of the same name, the Tiger Mask character has been a legendary figure in Japan for 48 years. Whether portrayed in the ring by Satoru Sayama, Mitsuharu Misawa, Koji Kanemoto, or the current Tiger Mask in New Japan Pro Wrestling, Yoshihiro Yamazaki, Tiger Mask is a superhero come to life for many fans. 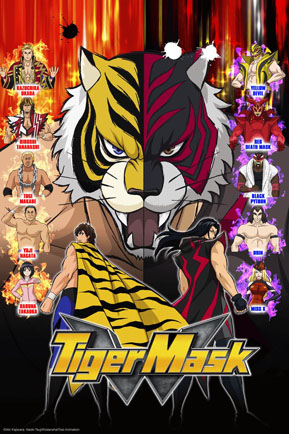 Toei Animation, the producers of the first Tiger Mask anime series in 1969, has rebooted the series this month with a planned 39 episode run of Tiger Mask W.

An oftentimes cutting and biting satire of the wrestling business, Tiger Mask W follows Naoto Azuma and his friend Takuma Fujii as they take separate paths to achieving their dream of becoming pro wrestlers. 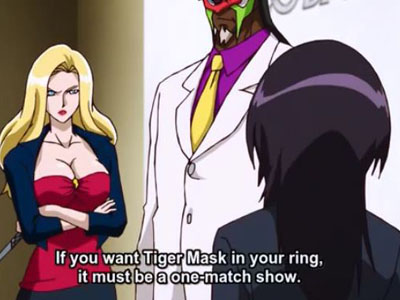 Takuma’s father, Daisuke, a wrestler himself, operated the now defunct Jipang Pro Wrestling promotion. In a match against the dastardly Tiger’s Den agent, Yellow Devil, Daisuke found himself hospitalized after Yellow Devil purposely tried to end him not just beat him. Jipang Pro Wrestling folded and Daisuke is now confined to a wheelchair, needing 24-hour care at a long-term care facility.

Vowing revenge for his father, Takuma becomes Tiger the Dark, training with Tiger’s Den and wrestling in the GWM (Global Wrestling Monopoly) all the while planning to destroy them from the inside.

Vowing revenge for his mentor, Naoto becomes the new Tiger Mask enlisting help from Kentaro Takaoka, Tiger Mask’s friend from the original series and Haruna Takaoka, Takaoka’s niece. Despite being a novice to the industry, Haruna becomes Tiger Mask’s manager, agent and that ushers in some very funny moments, such as her finally realizing there is money to be made from merchandising the Tiger Mask character. 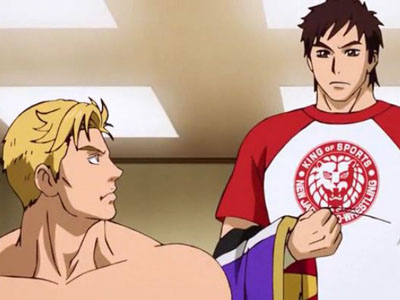 Competing with New Japan Pro Wrestling, Global Wrestling Monopoly is run by the diabolical and cutthroat Miss X, a grotesquely bosomed female version of Vince McMahon, who doesn’t take kindly to failure or being outsmarted. Seeing those dollar signs dancing in her head, Miss X tries her very best to manipulate the popular Tiger Mask who invades her promotion, nWo style.

Having gone their separate ways and their identities secret from the public and one another, Tiger Mask and Tiger the Dark seem destined for a showdown.

The actual wrestling in Tiger Mask W is treated more like MMA fighting with the wrestlers using all manner of insane, legit wrestling moves to purposely hurt, incapacitate and defeat their opponents. Like martial arts, wrestlers have to train to become true masters. 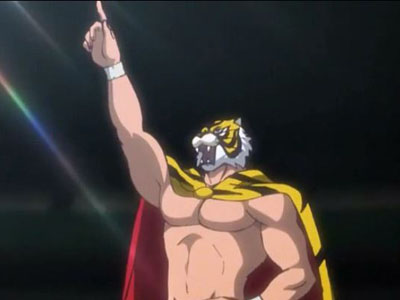 The series contains all of the usual trappings too. Wrestlers cut promos, have larger-than-life personalities like Black Python, Odin and The Mask of Red Death, frenzied announcers call the matches, there are a lot of shady backstage shenanigans and there are grandiosely named events like … WrestleMax! 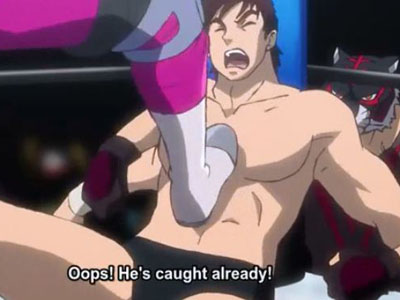 Tiger Mask W takes wrestling and its world to the extreme in every way, with a kernel of truth here and there about how the industry sometimes operates, for good or for bad. As a wrestling fan, if you take it for what it is and don’t mind reading sub-titles, Tiger Mask W is as lively, crazy and entertaining as any weekly wrestling broadcast.

Parents take note, with some graphic violence and a few risqué scenes, Tiger Mask W is not a series for younger children.

Tiger Mask W is currently airing on TV Asahi in Japan and is being streamed in North America by Crunchyroll.