Jim Brunzell a positive through and through

This Saturday in Waterloo, Iowa, former AWA tag team champion Jim Brunzell will receive the Frank Gotch Award, that recognizes individuals in wrestling for bringing positive recognition to professional wrestling through work outside the ring. Brunzell will be one of many pro-wrestling personalities on hand for the Tragos/Thesz Hall of Fame ceremony. Asked about his contribution outside of wrestling, Brunzell’s answer was quite unexpected: “I’m one of the few wrestlers who never got arrested!” That set the tone for a fun interview! 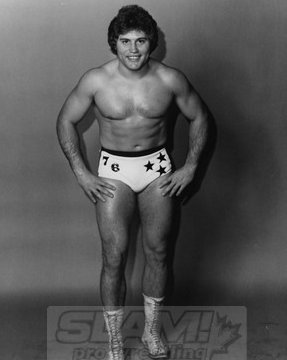 “I was really surprised and honour when I receive the call for the Frank Gotch Award,” said Brunzell in a more serious tone to SLAM! Wrestling. “I have been involved with juvenile diabetes, organizing a golf tournament to send kids to a camp up north and I’m part of my church maintenance committee, raising funds for it.”

“I’m pretty excited actually (about going to Waterloo),” added Jumpin Jim. “I’m going to have t-shirts to sell, rare pictures, it’s going to be fun. I can’t believe I’m going to be 64, you know!”

The White Bear Lake, Minnesota native was trained by Verne Gagne and the AWA had a big role to play in his career, but surprisingly, Minnesota wasn’t where he fell in love with pro wrestling.

“My dad was a navy pilot and in 1959 we stayed in Memphis for about a year and a half,” remembered Brunzell. “I wanted to be just like Elvis, but when I asked my dad for a guitar, he bought me an accordion. It was the same with wrestling. My parents didn’t let me watch it because they thought it was fake.”

He ended up watching it one way or the other and his first wrestling heroes were two of Memphis’ greats. “My favourite wrestlers at that time were Sputnik Monroe and Billy Wicks,” recalled Brunzell.

After playing football in college and getting tried out by the Washington Redskins, Brunzell explains why he never came close to play in the CFL like so many of his contemporaries.

“When I got back from Washington, I was 30 credits away from getting my degree, so I went back to college. That’s where and when Greg Gagne brought me to his dad’s wrestling school. So playing for Winnipeg in the CFL was never an option as I never got back into football.”

Talking about Winnipeg, Brunzell, like so many people in the state of Minnesota, is a big hockey fan. “I love ice hockey. I’m going to Xcel Energy Center a few times a year to see the Minnesota Wild. I remember that the Winnipeg Jets’ GM John Ferguson was coming down to Minneapolis to see Mad Dog Vachon. I always liked it when the Montreal Canadiens were playing the North Stars back in the days. Many former Canadiens worked for the Wild too, guys like Jacques Lemaire, Doug Risebrough, Mario Tremblay,” remembered Brunzell, who also remembers former North Stars like Cesare Maniago, Gump Worsley and JP Parise.

Who was his favourite North Star?

“Neal Broten,” he said. “But I’m also a very good friend with former player Shjon Podein. And I’ll always remember the day I met the great Bobby Hull in Winnipeg.”

Besides working many territories in the United States, Brunzell also worked in Montreal for International Wrestling back in the mid-’80s, when many AWA stars were coming to town. At that time, guys like Dino Bravo and Rick Martel were also working in Minneapolis. In fact, we can find a lot of pictures of Bravo wearing a Jumpin’ Jim Brunzell Gym t-shirt.

“I remembered Dino asking me for a t-shirt and I was asking myself if he could fit in an XXL. He was so strong. He’s probably the best bench presser I’ve met in wrestling. Martel on the other hand was one of the best babyface workers of my time. I have a distinct memory of working at the Montreal Forum as the Killer Bees against the British Bulldogs. We went 30 minutes that night. Montreal is beautiful, very European and cosmopolitan city.”

Montreal isn’t the only Canadian city he remembers.

“At the Big Event in Toronto, in front of 74,000 people at the Exhibition Stadium, we (Killer Bees) were wrestling against Jimmy Jack Funk and Dory Funk (Hoss Funk at the time) and the next day in the Toronto Star, you could see a picture of me giving one of the greatest dropkicks to Dory. It was just a perfect shot. It took me eight weeks before getting my hands on this picture,” he remembered, adding that he’ll bring one to yours truly in Waterloo this weekend.

Wrestling fans from the ’70s remember Brunzell teaming with Greg Gagne as the High Flyers, but fans a decade later most remember him as a Killer Bee with partner B. Brian Blair. One could even wonder how a high flyer becomes a killer bee. 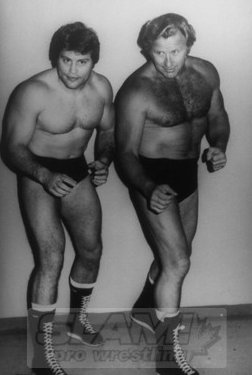 “The Killer Bees name came from the Miami Dolphins D-Squad of that time, whose last names all started with the letter B.” (Editor’s note: it was the ’83 Dolphins with Bob Baumhower, Bill Barnett, Lyle Blackwood, Kim Bokamper, Glenn Blackwood, Charles Bowser, Doug Betters, and Bob Brudzinski.)

Even if the WWF was a lot of money and a lot of exposure, the AWA will still be the place Brunzell enjoyed the most. In Waterloo this weekend, on top of receiving the Gotch Award, there will be a tribute to the AWA, a Q & A as well as an AWA reunion.

“The AWA was just a great place to wrestle. I was spoiled not working every day, with good money and time to see my family. It was my favourite promotion. It was my home.”