A zombie hot lunch with ‘The Scream Queen’ Daffney 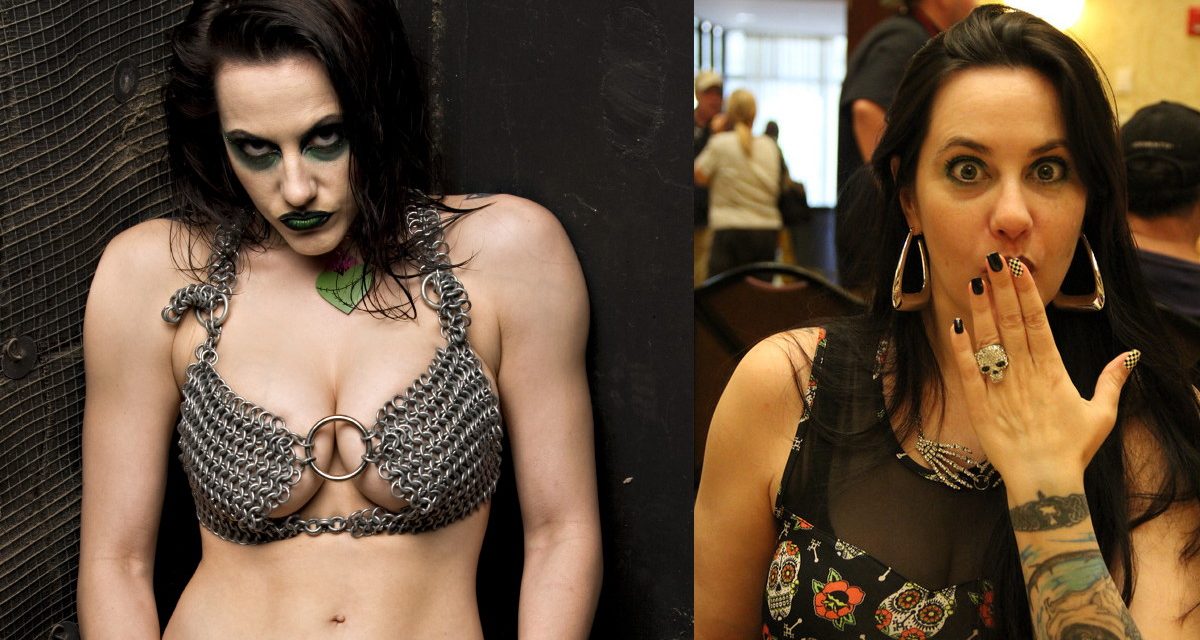 You don’t usually find a booker carrying a birthday cake for three of her wrestlers. If you initially thought that this was a prop meant to be used in a match, you would be totally off the mark. It was this booker’s legitimate caring for three members of her roster — a human touch that is often missing from the cold world of pro wrestling.

Welcome to lunch with Daffney, the legendary Scream Queen who entertained many in WCW and TNA, but is now a co-booker of the SHINE promotion, along with Lexie Fyfe. 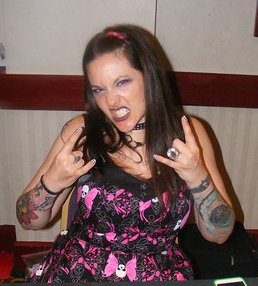 Daffney is now a behind-the-scenes power with SHINE. Photo by Christine Coons

Since her hands are full with her own fantastic outfit for the night’s festivities, this reporter offers to carry the cake. While she no longer wrestlers due to an injury sustained in the ring some years ago, Daffney does still announce and act as a ringside manager for events.

The former WCW Cruiserweight Champion graciously shows SLAM! Wrestling around The Orpheum, hours before the SHINE event in June. While a bar/nightclub transformed into a mini-wrestling arena has a cool factor that a high school gym or tiny soundstage lacks, it is still far from the big production levels of WCW or TNA that we have seen Daffney in. When asked if it is difficult to shoot a wrestling show in such a limited environment, Daffney says it is not a problem since SHINE has experienced production staff.

Count Daffney among them.

“I have a Bachelors in Film and Video Production, and I double minored in music and acting. After graduating, I would mainly work behind the camera, doing Production Coordinator work,” revealed Shannon Spruill — Daffney — while showing off the facilities. As such, her education prepared her for directing, producing, scriptwriting, lighting, and other technical duties — all things which an up-and-coming wrestling promotion requires.

“I get to come up with storylines, think of ideas for pretapes with the girls, and give girls character advice,” Daffney said. This is her new passion for the world of wrestling: helping to create new female wrestling stars.

One of the SHINE performers who comes into The Orpheum during our interview is rising star Santana Garrett. Daffney and Santana embrace, which is something Stephanie McMahon would never be seen doing with her wrestlers.

When asked about what it is like to work for one of the rare female bookers in pro wrestling, Santana said, “When I work for Daffney, I get great feedback from her and Lexie; whereas when I work for male bookers, all they say is ‘Great job.'”

“A lot of the times, when I work for male bookers, they don’t even think about that females need a separate place to change!” Santana quipped.

As the wrestlers begin to enter The Orpheum to start preparing for their matches, Daffney, wearing a cool goth-inspired skeleton top, which looked like an x-ray of her rib-cage, and badass boots, picks a spot for a late lunch, in order for us to continue the interview: a Turkish restaurant in Ybor City. While many wrestlers scoff at the prospect of eating anything but Waffle House or American food, Daffney reveals that she prefers international cuisine.

“I have a British mother and she introduced me to all kinds of delicious foreign food. By the way, are you a vegetarian?” Daffney asked. Looking after others is what sets Zombie Hot apart from most in the wrestling business. (For the record, we shared some Turkish-stye hummus, and I remembered not to double dip, since I was afraid of being on the receiving end of a Daffney shriek! She also ordered Kalamar tava, made of fish, which I could not eat, but she made sure I was taken care of as a vegetarian.) 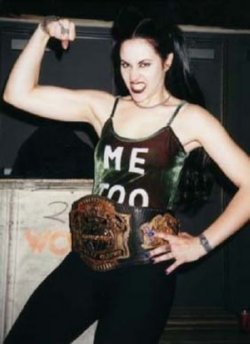 Daffney as the WCW Cruiserweight champion.

As we were being seated, I asked about how a university graduate entered the world of professional wrestling.

Daffney would watch wrestling as a military brat posted to Germany with her family. She enjoyed the athleticism and especially the larger-than-life characters. After returning to the U.S. and graduating university, she “would go on [acting] auditions in my free time,” while working as a production coordinator.

A casting call for WCW, therefore, caught her eye, since she had been watching WCW Monday Nitro for a number of years. “When I had my audition with WCW, I knew what was going on in their storylines, which surprised them,” she said with pride.

Like many wrestling promotions, WCW simply thought Daffney was eye candy to be used to get ratings. “They said, ‘We want you to stalk David Flair.’ And I said, ‘Kind of what he is doing to Kimberly right now?,'” she revealed about her audition with WCW. “And they were like, ‘Whoa! You know about that storyline?'”

Her education helped her survive the baptism-by-fire that new performers endure in the big leagues. “In WCW and TNA, my university background in film production enhanced my abilities for them, because I knew what was involved, from a production standpoint,” she said. “For example, if I knock a light, then they’ve got to re-set.”

Transitioning from operating film equipment to operating in the ring was no easy task, but Daffney credits one person, in particular, for taking the time to train her: Nora Greenwald (best known for playing Molly Holly in the WWE).

“Shannon ‘Daffney’ was a joy to work with at the Power Plant,” said Greenwald. Daffney was a quick learner, wrestling males an females alike. Greenwald remembers Daffney fondly, saying, “She always had a good work ethic, positive attitude and humble spirit.”

Daffney enjoyed the opportunity to bring her acting skills to WCW, TNA, and, now, the indys. She credits Vince Russo with giving her (and many other female wrestlers) the chance to play actual characters in WCW and TNA. “God bless him, Vinnie Ru,” she says with a smile. “There were pre-tapes under him, and character development, and larger than life characters.” 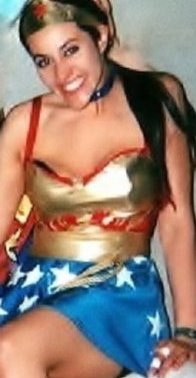 When the subject of vicious Internet character assassination of Russo by online fans is raised, Daffney stops eating and defends him.

“I know that he gave us a lot of opportunities, and I’m very grateful for that!” she exclaimed. “I saw first-hand the work he put into the scripts for us in both WCW and TNA, and it was just as much as he did for the guys: both genders were represented. Even for the pay-per-views.”

This is in stark contrast to the lack of pretapes and character development given to the female wrestlers in the WWE, for example. Moreover, Daffney might be one of the only female wrestlers who has been put in the ring against “Nature Boy” Ric Flair, and suffered the effects of his punishing Figure Four Leglock. Not even WWE Hall of Famer Trish Stratus can say that.

THE WOMAN WITH A THOUSAND FACES

She has enjoyed playing the wild characters that have been thrust her way over the years. Like silent film actor Lon Chaney, who was called the Man With A Thousand Faces, she has the rare ability to play characters so radically different from one another, that fans have not known it was Daffney playing some of them.

She has always been a DC Comics fan, and sees parallels between many pro wrestling characters and DC Comics superheroes and supervillains. Daffney has paid tribute to both. “In IWA, I used to manage Chris Hero in my Wonder Woman outfit. Later on, I designed my gear like [Batman nemesis] Harley Quinn,” she says. Jumping from superhero to supervillain is easy for a wrestler who goes from good girl to bad girl.

Being a face or heel, according to Daffney, depends on each fan’s perception of the character. One of her most unique characters, created by Vince Russo, is her satire on former Alaska Governor Sarah Palin. According to Daffney, some view the real Sarah Palin as a face, while others view her as a heel. For that reason, Daffney decided to play her role as The Governor right down the middle, unlike Tina Fey’s Saturday Night Live parody of Palin, which was clearly anti-Palin.

“I didn’t study [Palin’s] politics. I studied her mannerisms. I would be absorbing her cadence and delivery,” she explained. Daffney did not want to inject her own politics into the characterization, since wrestling fans and even wrestlers themselves are Republican, Democrat, or Independents. “I saw her on CNN and YouTube. I simply wanted to be believable when playing her.”

Daffney said it wasn’t hard to emulate Palin, and possibly saw a bit of a “work” in the former Republican Vice Presidential Nominee’s presentation. “She’s a politician … you are in front of the camera and you are performing,” Daffney said. “Maybe in some of her interviews, she laid it on a little thick.” 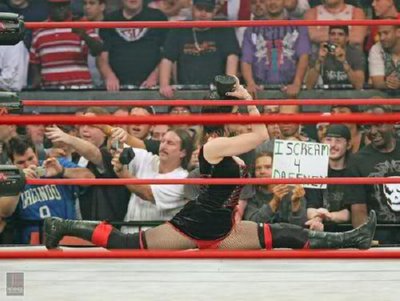 BREAKING THE GLASS CEILING: DAFFNEY AS A FEMALE BOOKER

As our lunch concludes, and Daffney is about to return to The Orpheum to lead her wrestlers in SHINE, she is asked about what she feels she brings to the table as one of the few female bookers in the business.

“I want women’s wrestling to be treated seriously,” Daffney said, calling it her primary goal with SHINE. “Wasn’t this the first WrestleMania since WrestleMania 13 where there wasn’t a women’s match? I find that interesting.”

She is committed to the SHINE promotion, which is a part of the WWNLive family of wrestling companies (which includes Dragon Gate USA, Evolve, and FIP). “I am excited that all four companies can stand on their own, but I feel the future could be through cross-promotion throughout the brands,” Daffney said. “There have already been SHINE matches on Evolve and FIP events.”

The WWNLive website also includes SHIMMER events, among others that are available on demand.

Daffney has been with SHINE since its inception in 2012, and when asked if she thought it would last this long, she said, “Initially, SHINE had five shows booked. We didn’t know if we would be around after that. As it went on, it became very successful … and we are still going!”

Don’t expect SHINE shows to have bikini pillow fights or bra and panty matches, at least while she books it. “I feel women should be portrayed in a different light,” Daffney concluded.

EDITOR’S NOTE: See Daffney and other stars of SHINE this Friday at their first anniversary show, where they will crown the first ever SHINE Champion, at The Orpheum in Ybor City, Florida. For more information, visit shinewrestling.com.