Brisco sets the standard for excellence at the Hall of Fame

WATERLOO, Iowa — Half of one of the greatest brother tag teams in professional wrestling history returns to the George Tragos/Lou Thesz Professional Wrestling Hall of Fame in Waterloo, Iowa, for its annual induction weekend July 12-13.

Wrestling legend Gerald Brisco, together with his older brother Jack, formed one of the most formidable tag teams in professional wrestling history. Brisco, himself a 2005 inductee into the George Tragos/Lou Thesz Hall of Fame, is excited to return to Waterloo. 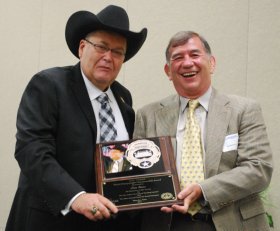 “Waterloo has such a wrestling history. I couldn’t ask for any better people to work with as the staff at the Hall of Fame. It’s a thrill for me to go to the Hall of Fame every year,” explains Brisco.

Brisco, 66, was a standout amateur wrestler at Oklahoma State University. Brisco’s older brother, Jack, who is nine years older and passed away in 2010, was already wrestling professionally in 1968 and helped break his brother in the business that year.

Brisco began working in the front office of the WWF as well as booker and a road agent before retiring in 2009. In 2010, Brisco returned to the WWF as a talent scout. Now his time is mostly spent looking for the best amateur competitors to make the transition to professional wrestling.

“I attend all these events and see who I think would qualify to be a WWE superstar and invite them to attend a tryout camp.”

Brisco, along with fellow inductee Jim Ross, will be conducting a professional wrestling try out seminar in conjunction with Troy Peterson from Impact Pro Wrestling at noon on Friday, July 12.

“The WWE puts on two camps per year, but this camp, with Troy and the Hall of Fame, is one of the best camps. There has been one wrestler from each of the last two years who has come to a WWE tryout camp. Unfortunately, no one has been signed to a WWE contract, but this year may be the year, you never know.”

“It’s a fun weekend, an enjoyable weekend. The emotion comes out from everybody at the banquet during their acceptance speech, it will be a great night for everyone,” Brisco said.

Tickets to the Impact Professional Wrestling Show on Friday, July 12 are $20 for ringside and $15 for general admission.

All-access passes have sold out.