Over the last 18 years the name the “Outlaw” Adam Knight has become very familiar to fans of professional wrestling in the province of Manitoba and throughout Canada. Yet, now Knight has launched a completely different venture, that of self-published author, with his first fictional novel Cowboy Endings, which will be part of an overall series titled Overdrive. 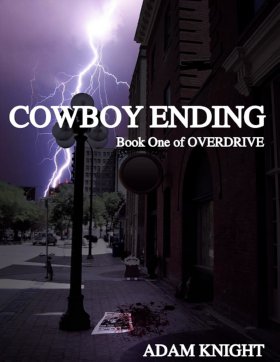 While there have been many wrestlers who have written about their careers, and aspects of the professional wrestling industry and history, there have been few that have ventured into the fictional arena. However, long before he became a wrestler Knight had been writing stories, while also voraciously reading anything he could get his hands on, which continues to this day.

“In many ways I feel that 18 years of pro wrestling helped to hone my storytelling skills and allow for a real sense of spontaneity,” Knight told SLAM! Wrestling. “Drama, humour, action, sweat, grit, and life. I feel that pro wrestling has introduced me to a wide variety of people and characters from all walks of life that I never would’ve met without it: Jokers, scumbags and real heroic souls. In several cases I have met and worked with individuals so irrevocably vile that were I too write villains based upon these people I would need to tone their actions down in order to make them appear believable. Pro wrestling is life at top volume. Literature needs a bit more restraint, but oh the material to pull from.”Someone who has known Knight’s desire to have a novel published for some time is Premier Championship Wrestling ring announcer, and sometimes manager, Josh Hammerstein. The two have known each other since 2007 when they worked together in a play at the Winnipeg Fringe Festival and have been friends ever since.

“He’s been talking for a while and then suddenly here it was!” exclaimed Hammerstein. “I bought the book and downloaded it to my eReader to support my friend, and am really enjoying it as a standalone book. I work in a bookstore and am a pretty prolific reader, and have shared some author recommendations with Adam, some of whom I can definitely see influencing his writing. I’m just past halfway in the book and am really enjoying it. The old adage of ‘write what you know’ is very evident in the book, I’m definitely enjoying seeing familiar locations in Winnipeg mentioned, and the main character of Joe shares a few features with a certain Cowboy wrestler/author I know. He uses a relaxed first person writing style so at times while reading, it almost feels like a casual conversation over a late night cup of coffee. The book says it’s Book One of Overdrive series, so I’m looking forward to more to come.”

As for how he came up with the novel’s title, Knight says that Cowboy Endings is a sort of double entendre, but is primarily a not so subtle wink at the readers asking them to buckle up for what he believes will be an exciting finish. 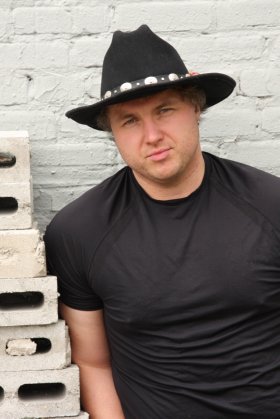 “I’ve tried to find official references to the term but I’m not sure it exists as anything more than ‘film producer’s slang,'” which Knight would describe in more detail as seeming to refer to any movie that ends like an old-fashioned Western. “Plus, I’m the ‘Outlaw’ Adam Knight. Cowboy is kinda my gig.”Knight has described Cowboy Ending as an urban fantasy novel based in Winnipeg, which follows the life of a nightclub bouncer named Joe who finds himself drawn into a realm of deception and betrayal, which eventually progresses to murder. Fundamentally, Knight states that the main character of Joe is leading a fairly mundane existence, struggling to get by, until he’s faced with a violent incident at the nightclub, after which terrible things proceed to happen in the world around him. This eventually leads Joe to make a decision to get involved in other people’s problems which could put the few things he values in his own life at risk.

To some this may harken back to film noir movies, but Knight says he was more influenced by Quentin Tarantino’s movie Pulp Fiction.

“When I was younger and writing I was striving for epic and noble destinies and other young man crap,” explained Knight.

“I’m a realist now and know that people are interested in characters and stories rooted in real scenarios, dealing with familiar problems: Paying bills, dealing with crappy jobs and relationship issues. Throw in a bit of sex, violence and a bit of supernatural fun and people are more likely to go along for the ride.”

There were however, two very strong influences on Knight’s development of Cowboy Ending, which were Jim Butcher’s Dresden Files series and Lee Child’s Jack Reacher.

“A true blend of the old Sam Spade style detective novels combined with magic, wizardry, humour, and action all wrapped up in contemporary Chicago. Butcher is a tremendous writer whose books should be studied by budding authors looking to build a series of characters and an overarching storyline.””Lee Child’s Reacher stories are another level of fun,” Knight went on to say. “Highly researched, complete tales that begin and end like an episode of TV that is fun to follow from book to book should you desire, but is unnecessary because of how well laid out the plot and characters are. In my wildest dreams I would love for people to notice where I pulled influences from both Harry Dresden and Jack Reacher – hopefully without being accused of blatantly ripping them off.”

Beyond those influences, Knight has stuck to the simple mantra of “write what you know” when it comes to his writing career.

“It’s really why in my opinion most authors don’t really put out their best works until much later in their careers — when they have more life experiences to draw from,” Knight stated to SLAM! Wrestling.

“I have clearly been a bouncer at clubs many times in the past. I have worked in media. I have been involved in investigations before — though nothing quite like what happens in the book, of course. Plus, I live in Winnipeg and felt that while I was taking the opportunity to show what I could do as a writer that it would be a shame to set my tale in a place that I couldn’t flesh out as readily as my hometown. Winnipeg is a remarkable city filled with culture and opportunity on the surface and many layers of excitement underneath. I’m looking forward to showing a bit more of Winnipeg in each book.” 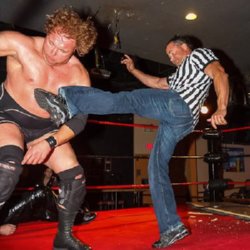 Adam Knight in the ring.

As to whether or not the main character of his novel is based on anyone in particular, Knight responded that Joe was essentially one part Harry Dresden, one part Jack Reacher, some of his own life experiences thrown in and a few other odds and ends that he’s drawn out of a hat when the time was right; so basically no one in particular.Knight would go on to further explain that there is an independent nature to being a professional wrestler nowadays which has influenced his writing career; and that to be successful it’s necessary to work and hustle up connections in order to make a future for yourself.

“In today’s internet age, eBooks have made self-publishing in the old-fashioned sense completely obsolete,” said Knight. “If you know your market and know how to connect with them online, you can find a way to express yourself and reach said audience. The similarities are there.”

Thus, this goes some ways to explain why Knight chose to go the self-publishing route with his novel and why he decided to launch it as an eBook.

“I was rather disheartened in my younger days with the submitting a pitch to publishers process,” Knight would go on to say.

“If you’re young and don’t have the money for a literary agent you’re pretty much screwed. In today’s cut-throat book market where it’s harder and harder to break in with any publishing company without compromising the story you want to tell. So screw it, it’s 2013 and the Internet has made it easier for artists of any spectrum to share their message with the world. I am used to ‘being my own boss’ to a degree through wrestling, this really isn’t much different. Plus, I take fewer headshots.”

So through the magic of Twitter, Knight was able to connect with Mark Coker who has an eBook publishing site called Smashwords. “I saw a retweet of one of his articles in the Huffington Post where he talked about the future of eBook publishing and the future of the literary industry,” Knight explained. “I was immediately fascinated. While I have never met Mr. Coker personally I would love the opportunity to do so and pick his brain. Or if nothing else, shake his hand for creating an opening to all writers to a site like Smashwords that gives me a platform to showcase my work.”One person who has been very impressed by Knight’s novel is PCW Canadian Champion Jay Walker, who actually helped to design the novel’s cover. One of the things that Walker was impressed by was Knight’s ability to capture Winnipeg’s nightlife perfectly in the book.

“His honesty, not only in the telling of Winnipeg’s scene and its people, but in his character’s complexity and opinions makes for a very personable and enjoyable read,” Walker said. “For anyone who’s ever had the chance to witness Adam Knight perform in the ring, owe it to themselves to pick up this eBook. It’s thoroughly entertaining just like the larger than life Outlaw that hits the ropes. Knight proves that there’s a brain behind the brawn, and I’m looking forward to the next book!”

As for the future, if sales continue to do well, Knight would like to produce hard copies of his novel, perhaps in tandem with the release of the second book in the Overdrive series. Also, Knight has plans for three books for the overall series and would be open to more should he continue to have fun with the process of writing them. 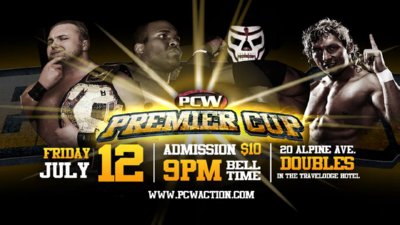 “I have the basic outline laid out for the next two books with more roughly sketched out ideas for more,” said Knight.
“Writing this book has been very rewarding for me, allowing me to really reconnect with a part of my youth that I thought I had outgrown. I can say that Book Two is tentatively scheduled in my head for something close to a December release — details to follow.”

However, this doesn’t mean that Knight has given up wrestling. In fact he will be participating in PCW’s Premier Cup 2013 on Friday July 12th, at 9 p.m. at the Doubles Fun Club in Winnipeg, Manitoba. The eight-man tournament will feature not only Knight, but Kenny Omega, and PCW Champion Antonia Scorpio Jr.

Ultimately, though Knight hopes people enjoy his novel as he had a blast writing it and is very thankful having had the opportunity to share it with others.

“Much like whenever I lace up the boots and step through the curtain; my goal is to entertain the people on every single night. Sometimes you succeed, sometimes you don’t, but it is the effort expended to try that matters.”