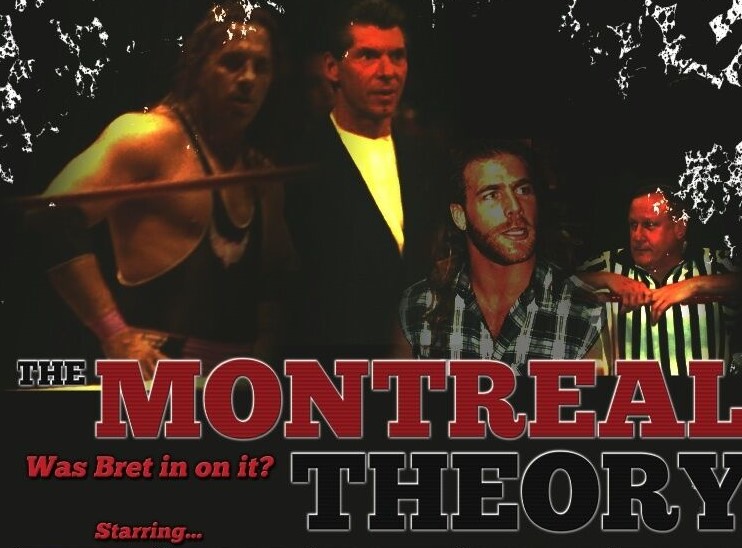 “It’s funny, two weeks ago my son Blade and I saw this post that someone had put up about it. I was like, ‘Oh my god, are you serious?!’ It’s the most ridiculous thing I’ve ever heard. You shouldn’t have wasted your money producing this conspiracy theory. I think those people should have interviewed the people who were around Bret like me or my kids. If they had interviewed us and asked us what it was like after Montreal happened … There’s no way it was a work, not afterwards, not the way Bret reacted, the way he was, when he went to WCW. You could see the change in him, Bret’s not that good an actor, he’s not Robert De Niro. There’s no way he could’ve hidden it.”

This is what Julie Hart, Bret’s ex-wife had to say about The Montreal Theory DVD. And quite frankly, this is what I personally think as well.

After hearing Pittsburgh’s radio host Brian Krasman considering the possibility of Bret Hart knowing in advance what was going to happen at the Survivor Series in Montreal in 1997, and after talking to Steve Corino — who is one of the strongest advocates of this theory — filmmaker Joe Dombrowski decided to dig a little more and conduct a series of interviews with pro wrestling personalities about what could’ve transpired of this.

The premise is simple. Bret Hart, as long as 14 months before November 9, 1997, knew what was going to happen. He knew that they would do a screw job finish that would lead to Vince McMahon becoming that heel character he actually became. As he was going to WCW, his WWF reputation wasn’t touched by this and ultimately, he would be back in three years (after his WCW contract would end) to save the WWF from the evil Mr. McMahon. Only his brother Owen’s death and Bret’s injuries prevented that scenario to fully happen.

This general premise is explained in the first 30-45 minutes of the second DVD of this production. The problem is that this second DVD lasts three hours. And I’m not even talking about the first DVD, 100 minutes on everything leading to the Screw Job and beyond like if it was a Montreal Screw Job for Dummies DVD.

Right from the start, I’d like to say that I am usually a conspiracy theorist. But in this case, I just don’t buy it. Nowhere in the DVD does someone arrive with serious evidence or proof showing Bret was in on it. There is no “magic bullet” and no second shooter.

Dombrowski is right when he says that it’s “the perfect ending for the perfect story” because of what Mr. McMahon became, because of his feud with Steve Austin and because at the end of the day, he ended up buying WCW. But that’s an easy way out and that’s a conclusion you can only have after taking a 15-year look back on it.

Throughout the DVD, people like Kevin Kelly, Jerry Jarrett, Bill Behrens, Scott Hudson, Chris Cruise, Les Thatcher, Dr. David Reiss, Tony Mamaluke, Raven, Corino, Krasman, and Dombrowski give their thoughts on the situation. For the most part, they are people who were not involved with the WWF at the time, but as it is explained at the beginning of the DVD, it shouldn’t matter because they are people with wrestling knowledge and credibility.

From that list, only Corino and Krasman really endorsed the proposition 100%. Tony Mamaluke agrees to it as well, but not for the good reasons, as he believes in it only because according to him, everything in wrestling is a work. Raven is the leader of the opposition as every time you see him on the screen, he doesn’t agree with the idea. At the very end, he kind-of-agrees that maybe the day of the show, Vince could’ve spoken to Bret in private and only then, Bret would’ve agreed to the screw job finish. But to me, it seems like Raven was forced into that answer, because he disagreed too much with the suggestion, especially compared to the other people being interviewed.

The best evidence according to the theorists is the fact there were no victims and that everyone benefit from it: Shawn Michaels as the champion, Vince as the lead heel, Bret because he got the sympathy of the crowd as he was leaving and, of course, the WWF.

“Everyone ended getting exactly what they wanted,” said Dombrowski.

What one tends to forget is that in 1997, the WWF wasn’t near to the level it eventually became a year or two after. The company was in deep financial trouble. Journalist Dave Meltzer once said on his radio show that the fans don’t know how close the WWF came to file for bankruptcy in the 1990s.

If you have financial problems, and that’s also why Vince decided to let Bret go, how can it be a good thing for you to maybe get a payoff in three years?

I mean, who would take the chance to send its biggest star to his competition for a payoff he’s uncertain about?

“If you’re already losing a war, why would you send one of your top two guys to the opposition? Right there your argument makes no sense,” said Raven in the documentary.

According to the theorists, the payoff was Bret vs. Vince so at the end of the day, there wasn’t any payoff. It’s difficult enough to plan something six months or a year in advance, let alone three. There are too many things you can’t control, like Bret getting injured for example.

The theory is only based on opinions. A lot of what ifs, a lot of I thinks, a lot of “the circumstances are too perfect,” but no real evidences.

Brian Krasman noted as an example that the DVDs produced over the years were a payoff. We all know Vince McMahon is a creative genius, but no to that extent. Those DVDs were produced 10 to 15 years after the fact. It’s almost ludicrous to think that. Another theorist talked about the WWE benefiting from all the screw job finishes they did over the years, forgetting to mention that they never drew WWE a dime.

I would’ve loved to hear the theorists on some other factors. What if Mike Tyson-Steve Austin doesn’t happen or doesn’t catch on? What if USA Network cancels Raw? Are we still talking about a perfect ending? If it was a work, why there was no camera crew to film Bret punched Vince? That was a money shot right there. Theorists will tell you that it might not have happened, that it could’ve been just a Hollywood act, always trying to go out of their way to not see the facts coming.

“I want this to be the biggest angle in the history of pro wrestling,” confirms Corino in his interview. And that’s the feeling you get from everyone who talks about it.

To his credit, Dombroski allowed people like Scott Hudson and Raven to be more sceptical than others on the theory.

“If it was a work, too many would have had to be in on it,” argued Hudson.

“Why does he want to show Bret stronger on his way out?” added Raven.

And if it wasn’t enough, the last part of the DVD shows a melting pot of footage from shoot interviews, not done for this production, conducted with former WWE wrestlers such as Kevin Nash, Sean Waltman, New Age Outlaws, Earl Hebner, Sunny and Shawn Michaels himself, all saying it was a work or that Bret knew about it all along. Of course, these interviews were done at a time where they were not associated with the WWE. Selling the DVDs was the most important thing for them and like Eric Bishoff taught us, controversy does create cash. For instance, Shawn’s footage was from 2000, at a time when he didn’t even admit he was in on it.

Tony Mamaluke quotes Boris Malenko saying to “believe none of what you hear and only half of what you see.” This is exactly my recommendation after watching this DVD. If you’re only curious to see what other arguments the theorists come up with, go ahead and buy it. If you believe the premise itself is ridiculous, save yourself some bucks and five hours of your time.

In 60 years from now, when a new generation of wrestling historians will take a look at the Montreal Screw Job, they might think the circumstances seem too perfect to be true and that it could very well be a work. Pretty much like some of us actually do with the first Montreal Screw Job in 1931 between Strangler Lewis and Henri DeGlane. For the only sake of not being tagged as wrestling marks, for the lone argument that everything in wrestling is a work, it just saddens me that we didn’t have to wait 60 years for that.

For another side of the Montreal Screw Job, the whole story from its early beginning to Bret’s return to Montreal in September of last year, buy Mad Dogs, Midgets and Screw Jobs: The Untold Story of How Montreal Shaped the World of Wrestling, written by Bertrand Hébert and Pat Laprade. The book is getting great reviews and is available online at ECWPress.com and Amazon.com. For any questions or comments, Pat Laprade can be reached at [email protected]