Jim Brunzell made his mark inside and outside the ring

The man named for his unique leaping ability, “Jumpin” Jim Brunzell will be on hand to receive the Frank Gotch award at the Lou Thesz/George Tragos Hall of Fame weekend July 12 and 13.

Called “Jumpin Jim” for his renowned dropkick, Brunzell transitioned from a standout amateur athlete to one of the most renowned tag team wrestlers in the 1970’s and 80’s. 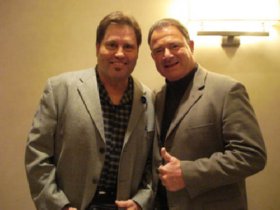 Brunzell was a standout athlete in high school at White Bear Lake, Minnesota, excelling in football and track, even winning the state high school high jump. Brunzell also high jumped at the University of Minnesota, winning some meets by soaring over 6’6″, although Brunzell did high jump over 6’7 ½” in an unsanctioned meet. “I wrestled at 220 pounds but had a 36-inch vertical jump,” says Brunzell.

Brunzell also played football at the University of Minnesota with another future professional wrestler, Greg Gagne. Gagne would later transfer to the University of Wyoming, but the duo kept in contact. After Brunzell was cut from the Washington Redskins after a tryout as a tight end, Gagne approached Brunzell about trying wrestling.

“Little if I had known that if someone would have told me when I was 18 years old that I would be a professional wrestler for 25 years, I would have thought they were crazy,” explained Brunzell.

Unlike some other wrestling camps where many would try to become wrestlers and only few would survive, the Gagne camp was only held every three to four years and was by invitation only. Some of the biggest names of the 1970s and ’80s were in the training camp. “Ken Patera, Ric Flair, The Iron Sheik, Bob Bruggers, Greg Gagne and myself were part of that camp. Every one of us were really successful in pro wrestling and a lot of us had a 20-year career or longer,” said Brunzell. “Gagne had a knack for training guys and developing them.”

After the Gagne camp, Brunzell set out to wrestle in the territories, notably Central States, learning how to work in front of a crowd before returning to Minnesota and the AWA. While in Central States, he teamed with Mike George to win the NWA Central States Tag Team title, first on October 25, 1973.

Upon returning to his native Minnesota, Brunzell formed a tag team with former college teammate and son of AWA owner Verne Gagne, Greg Gagne and was given a huge push as a tag team called “The High Flyers”.

“Being in the tag team gave me the opportunity to wrestle in my hometown and enabled me to be in the ring with some of the greatest who had ever been in the ring: Nick Bockwinkel, Ray Stevens, Bobby Heenan, Bobby Duncum; it was a great opportunity for myself while I was learning the business and the value was unbelievable,” Brunzell said.

The duo won their first of two AWA World Tag Team Titles on July 7, 1977, by defeating Bobby Duncum and Blackjack Lanza. Brunzell and Gagne would be stripped of the belts on September 23, 1978, after Brunzell was injured and could not defend the belts.

The High Flyers would regain the belts from The East-West Connection of Adrian Adonis and Jesse Ventura on June 14, 1981, before losing the belts just over two years later to The Sheiks, Jerry Blackwell and Ken Patera. 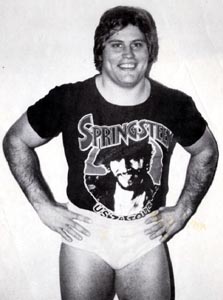 In between tag team reigns, Brunzell tried his hand at singles wrestling in the Mid-Atlantic territory. Brunzell was Mid-Atlantic Heavyweight Champion on two separate occasions, defeating Ken Patera and Ray Stevens for the belt.

“I thought I had a lot of ability and I could do it on my own, that was one of the reasons I went there in 1979. Jim Barnett, (who was running Atlanta where Brunzell also wrestled), asked me what I would like to do. I told him I would like to be the heavyweight champion and I would also like to go home. Barnett told me being the champion was a possibility but if I go back to the AWA, it would be the worst move of my professional career. I went back to the AWA and in 1981, it was the biggest year I ever had in terms of making money,” Brunzell explained.

Brunzell eventually moved to the WWF and was teamed with B. Brian Blair as a team called The Killer Bees. “We had a really unique identity as we were a babyface team, but wore masks in the ring. We were a good guy tag team but employed the same strategies as a bad guy team,” said Brunzell.

Life after wrestling has been good to Brunzell. “I was very fortunate to have the job I have now, selling for a family-owned company.”

Brunzell will be on hand to receive the Frank Gotch award in Waterloo, Iowa, during the hall of fame weekend, July 12-13. The award recognizes individuals in wrestling for bringing positive recognition to professional wrestling through work outside the ring. Named for former World Heavyweight Champion Frank Gotch, past winners include Ted DiBiase, Dan Severn, Nikita Koloff, Ivan Koloff, Jesse Ventura, Hacksaw Jim Duggan and Mick Foley.

“I feel honored to be given this award,” Brunzell said.