WATERLOO, Iowa — Although he has retired from active competition, Adam Copeland, better known in the wrestling world as “The Rated-R Superstar” Edge, main evented one more time Saturday night, as he was given the Lou Thesz Award at the George Tragos/Lou Thesz Hall of Fame induction ceremony. 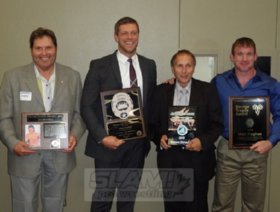 “Thursday night I was in Halifax, I flew to Cedar Rapids only to be picked up by Danny Hodge and his wife. I mean, how many times does that happen?” said Copeland to open his speech.

And he’s right, as this is one of the unique aspects of the National Wrestling Hall of Fame Dan Gable Museum, located in the heart of Waterloo, Iowa.

Being introduced by both the emcee of the evening, Toronto’s Arda Ocal, and author Bill Murdock, Copeland was thrilled to be with people he respects.

“It’s fun to be here with the guy who hired me,” he said, referring to Jim Ross. He also thanked Gerry Brisco for helping him after his first match and said it was an honor to meet Larry Hennig as he was such a big fan of “Mr. Perfect” Curt Hennig growing up.

The Lou Thesz Award is given to an individual in wrestling who has taken the skills of professional wrestling into the realm of public service.

“I’ve been charmed, I’ve been blessed, thank you for this honor, it’s greatly appreciated,” said Copeland in conclusion, receiving the award from Lou’s widow Charlie.

Three wrestlers were inducted in the actual George Tragos/Lou Thesz Hall of Fame this year, but unfortunately for the fans, the two living inductees were not in Waterloo.

“As long as I’m director here, no living inductees will show up,” joked the director of the museum, Kyle Klingman. In 2011, Dory Funk Jr. didn’t show up. Last year, it was Kurt Angle, This year, both Ric Flair and Bill Watts were not on hand to receive their plaque, both having backed out of their commitment to attend.

Receiving the plaque for them were Gerry Brisco (for Flair) and Jim Ross (for Watts).

If last year’s induction resulted in a bit of a controversy with Brisco receiving the honor for Angle, this year was all about respect.

Brisco said that there would be no controversy this year out of respect for Flair and the tragedy surrounding his son Reid.

While Flair chose to attend another event Saturday night (a paying autograph gig), Watts’ health, especially his back, prevented him from coming to Waterloo this year.

Ross started his acceptance speech by saying that former MMA fighter Matt Hughes, who was sitting at his table, gave him a hard time for having notes.

“I looked at his cauliflower ears and had flashbacks of Danny Hodge,” he joked.

Ross then talked about Watts main eventing the Madison Square Garden against Bruno Sammartino. “When you’re 27, and you sold out MSG three times against Bruno, you can find work anywhere in the world.”

He described Watts as “an average worker, but a great talker, a great psychologist who could move for a big man.”

And Ross, who started in the business after Watts hired him in 1974, had a funny way to describe Watts as a promoter. “He’s a mix of Vince Lombardi, George Steinbrenner and Jerry Jones!”

The third inductee of this class of 2013 was former amateur and pro wrestler, the late Chris Taylor. His widow and members of his family were there to accept the plaque on his behalf.

Three more awards were also given that night.

Jim Brunzell received the Frank Gotch Award for his involvement in the community and his work outside of the ring. Brunzell noted that when he gets asked about his best tag team partner, his answer is an easy one.

“I’ve teamed with Mike George, Greg Gagne and Brian Blair, but the best tag team partner I’ve ever got is my wife, Mary!”

According to Ocal, Napolitano took over 500,000 pictures in his lifetime, a number the man himself reduced to 100,000.

Matt Hughes, former UFC Welterweight champion, received the George Tragos Award, given to an exceptionally competitive wrestler who has adapted his wrestling skills and competitive nature to excel in mixed martial arts. Hughes, who like so many people was a pro wrestling fan as a kid, joked saying he’d been asked to keep his speech short since JR went too long.

But between all these inductions, speeches and awards, Jim Ross really nailed it when he talked about the museum itself.

“It’s the coolest place. Our goal should be to talk about the museum, to tell at least one person how much fun we had this weekend, and talk that person into coming here next year.”

— A crowd of about 200 people attended this year’s banquet, doubling last year’s number.

— When his name was mentioned, Mad Dog Vachon, who was in attendance with his wife Cathy, received a standing ovation by his peers and fans attending the banquet.

— On the Friday afternoon, there was a pro wrestling try-out scouted by Ross and Brisco. In the evening, Impact Pro Wrestling, under promoter Troy Peterson, presented one of their shows in front of a few hundred fans. The show features Colt Cabana, Perry Saturn and Danny Duggan among others.

— On Saturday, Brian Shields, co-author of both WWE Encyclopaedias, did a great presentation of the WWE and answered many questions as well.

— “The Voice of Minnesota Wrestling” Mick Karch and wrestling historian George Schire were the host and co-host of an AWA Q&A, with Jim Brunzell, Baron Von Rasche, Larry Hennig, Danny Hodge, Jake “The Milkman” Milliman, and the widow of Chris Taylor, Lynn. The training room was packed with fans for the session.

— Matt Hughes did an MMA seminar.

— Among the other wrestling personalities in Waterloo not already noted were Kenny “Sodbuster” Jay, Jason “Wolfman” Sanderson, Dan Gable, and media Bertrand Hébert and Brian Hoops.