When WrestleMania XXIX’s DVD was announced, there were two features I was looking for, and WWE only delivered on one of them.

But more on that in a second. 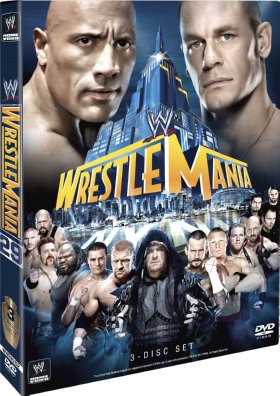 Let’s start this review off with one simple truth — ‘Mania is pretty much guaranteed to be a seller for WWE’s DVD department, the top PPV of the year and quite likely among the top five sellers for the year, period. There’s a mystique to ‘Mania that makes the DVD collector seek it out, whether or not it comes in a collector case or a little something extra (like the film reel piece they did a few years back).

But for the non-collector like me, there has to be something special within the content that’s going to make me want to go out and buy it either in DVD or Blu-Ray form.

In the case of ‘Mania XXIX, there was a great need. The card itself was okay, but there wasn’t the two to three matches that would scream to me “go and buy this now!” Even the pre- and post-shows, which I do appreciate WWE adding, weren’t enough of a draw.

Nay, what was going to get me to lay down case was the extended features, essentially not available anywhere else. Take for example the Mania of WrestleMania documentary done with the WrestleMania XIX DVD. That made me want to shop.

This year the big extra was the full version of the WWE Hall of Fame induction ceremony. This was only the second time that it would be available in a broadcasted format (the other being a week-long hosting on WWE.com and streaming opportunities on devices). Now obviously I’m a bit more prejudiced here since I have connections to a couple of the inductees, but seeing the ceremony in its entirety this time around was on my must-watch list.

To WWE’s credit, at least on the surface it didn’t seem like there was anything cut out. We did hear the boos towards Maria Menuonos and Donald Trump, and Bob Backlund’s crazed speech was included in its entirety.

So with those positive vibes, one would assume I’m satisfied with the recording. Satisfied, perhaps, but not blown away.

There was one element of ‘Mania that wasn’t included that really does stick out to me. No, it’s not clips from Axxess, though seeing a few of the NXT matches that took place at the expo would have been a cool inclusion.

What really should have been here is the day-after Raw. Here was the single biggest event on the Monday night calendar, and in many people’s opinions the better of the two shows. There was so much memorable that happened that I wish I had a copy to hold onto instead of depending on availability on YouTube. WWE definitely did a disservice by not including it, in least in part.

Again though, this isn’t your normal PPV DVD. This is ‘Mania, and at one point or another this DVD will end up in collections for wrestling fans across the globe. There’s no question that the recording is decent, but as illustrated it could have been better.