Rampage makes an Impact live with Angle at Impact

ATLANTA – With Slammiversary XI still fresh in the minds of wrestling fans, it’s time to witness the fallout after another good PPV. With game one of the NBA Finals as the head-to-head competition, Impact Wrestling made sure to put on a solid show to reward the fans for coming out tonight. 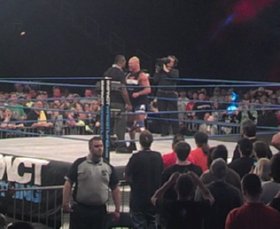 To say the crowd at the event was diverse would be an understatement. Everyone from hardcore wrestling fans to casual ones and even those who simply thought this would be a fun way to spend a Thursday evening with a chance to be shown on live TV (those people sat next to me) were in attendance.

The one really odd thing about the show was that there were two episodes of Impact on display. The first two hours were tonight’s show and the second two hours were for next week’s show. This meant some of the wrestlers came out for two matches and a few of the promos being cut for next week had to give the allusion that a week had passed including wearing new attires each time they came out. It was a little unusual, but it definitely didn’t take away from the shows. And don’t worry; the spoilers for next week will be kept to a minimum.

Just like any good wrestling show right after a PPV, events were set in motion for the next PPV and for the most part, they were good choices. The crowd gave Bully Ray a ton of heat when he came out and when Hulk Hogan announced a ladder match as the main event, the crowd erupted in joy.

Regarding the ladder match, this particular one was a little bit odd. It was unclear if the stipulation meant that the winner would simply have to grab the hammer hung above the ring (rather than the title) or if it was more like one of the pole matches where whoever gets the object can use it as a weapon.

It ended up being neither because while Bully Ray got the hammer neither he nor Jeff Hardy were able to use it to end the match. With Bully Ray hightailing it out of the ring with no clear winner, the crowd was not happy. Chants of “This is awful!” and one more that’s not suitable to print, clearly they wanted an actual decision, which is the entire point of a ladder match.

While not the main event, the big news in Impact Wrestling was the recent signing of Quinton “Rampage” Jackson. When he came out to the ring, the crowd definitely gave him a nice ovation. Kurt Angle coming down to talk to Rampage about beating the best got another huge pop from the audience. And why not? You’ve got two men who reached the pinnacle of their respective sports before turning to professional wrestling. Whenever these two men will eventually meet, I know the match will be a great one.

Without describing each match on the card tonight, there were three matches that had the biggest crowd reactions. Believe it or not, the opening contest pitting Chavo against Hernandez in the first BFGS qualifier was not only entertaining, but the audience was really into the ending. The six-man tag match between James Storm, Gunner and Chris Sabin against Austin Ares, Bobby Roode and Kenny King was probably the surprise highlight of the night. All six men had their time to shine and Sabin’s Tornado DDT into Hail Sabin was a great way to end the match. Of course, the ladder match between Jeff Hardy and Bully Ray was the final highlight.

So with this week and next week’s shows in the books, I have to say that when the Bound for Glory PPV happens October 20, Impact Wrestling has already started properly planting the seeds of this next PPV. I can’t wait to see how this all plays out.