For Quinton “Rampage” Jackson, the opportunity presented to him by Spike TV, TNA Wrestling and Bellator MMA was too good to pass on.

In fact, he said it was a dream come true.

The organizations officially announced their newest signing Wednesday, a multi-faceted deal that will see Jackson, the former UFC light-heavyweight champion, fight for Bellator, become a professional wrestler for TNA, and become the focus on a four-part reality TV series on Spike TV in addition to potential movie opportunities with Paramount Pictures. 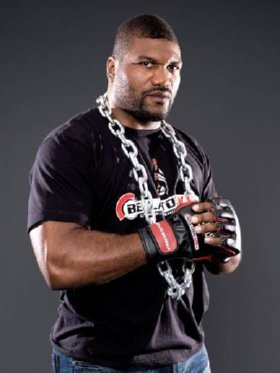 “In the past, relationships I had with promoters, I felt like I wasn’t appreciated, but you guys get it,” Jackson said in reference to Spike TV. “I always wanted to be a pro wrestler. That’s why I started wrestling in high school. That’s why I fought the way I did when I was younger. Now my dream has come true. I get to go to TNA and do some pro wrestling. … I’m a big kid, I love to do all this stuff. You guys are making my dream come true.”

Jackson, who is currently rehabbing a knee injury, will appear on Thursday edition of Impact Wrestling from Duluth, Ga., in his first appearance for the company. TNA president Dixie Carter said “this relationship works perfectly for us.”

“The question is can he dominate TNA the way he’s dominated MMA? That’s our hope,” Carter said. “He’s very confident that’ll be the case and that makes me confident it’ll happen as well. He’s a tremendous talent and he has a big personality, as well.

“He’s very serious about his deal with TNA and he’s committed to be the best at what he does.”

Jackson said he plans to train for pro wrestling in his down time, when he’s not training for a fight.

“Sometimes after my fights, I go and be a regular human being,” Jackson said. “I forget I’m an athlete and just eat anything I want, so this might help me keep in better shape.”

Carter said Jackson has a lot of training to do, but has made a large commitment to her.

“He’s going to start right away,” Carter said. “His training, whether it be at OVW or Southern California where he’ll be set up with a training team as well, he’ll be committed to that, and I expect it to be sooner rather than later.

“I think he’s such a gifted athlete, and he does have a lot of wrestling skills … I think he’s going to be great. It takes a long time. Even with Kurt Angle, it took a little bit of time, but Rampage is committed to getting in there immediately and getting this done. I can’t put a time on it, but I know he’s anxious to get in the ring.”

Jackson said signing this deal also helped reinvigorate his love for mixed martial arts, which was waning during a rough stretch in the UFC where he lost his last three fights.

“I lost a lot of love for MMA, I’m not going to lie, back when I was in the UFC,” Jackson said. “They killed it, they drained it. But this new deal has me so excited and instantly brought the love back. I can’t even explain how I feel like now. I love this family.”

Jackson expressed interested in moving up to the heavyweight division, (“I’m getting old,” he quipped) but said he’d consider competing in the light-heavyweight division (205 pounds) if the right opportunity came along and he had adequate time to drop the weight.

The Jackson signing complements a similar signing made by Spike in 2012 where Muhammed “King Mo” Lawal was signed to a deal where he’ll fight for Bellator and wrestle for TNA. He has started to compete in Ohio Valley Wrestling recently after having to battle a knee injury of his own in 2012.

“I can’t wait to see the two of them together at Impact,” Bellator chairman Bjorn Rebney said. “That’ll be spectacular.”

In fact, Jackson said the two could become tag team partners despite some past animosity between the two. However, Jackson did not dismiss the possibility of the two fighting each other in Bellator.

“I thought I was gonna have to whoop up on Mo, but he’s a cool guy,” Jackson said. “We might end up being best friends one day, who knows.”

No matter how that situation ends up unfolding, the Jackson signing continues the working relationship between TNA and Bellator.

“We’re working together in so many ways that have never been done before and that’s what takes this to a different level,” Carter said.