TNA’s third pay-per-view of the year, Slammiversary, saw TNA battle members of Aces & Eights in several matches, but in the main event, TNA Hall of Famer Sting challenged Bully Ray for the TNA World Heavyweight Championship in a no holds barred match. Who would emerge victorious with everything on the line?

On a night where four championships were decided, none were bigger than the main event, a one-fall, no holds barred match for the TNA World Heavyweight Championship between Bully Ray and Sting. Not only was the title on the line, but if Sting loses, he’ll never be able to challenge for the world title again.

Following introductions by Jeremy Borash, the two take advantage of the no holds barred stipulation early. With Bully Ray searching under the ring, the crowd is chanting for tables. Ray clotheslines Sting on the floor and then sprints to the back, apparently not being able to find what he wanted under the ring. He comes back with a chair, but immediately misses with it, allowing Sting to grab it and work Ray over with it. 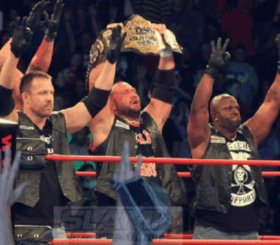 Sting goes to light Ray up on the ramp again with the chair when Brooke Hogan comes out and is obviously dismayed at what’s going on. Sting asks her to leave, to turn around and leave, and she does. Sting goes back to Ray but eats a low blow. Now Ray beats the tar out of Sting with the chair, bending it in the process. He tosses the chair to Sting lands a big boot with it, then hits Sting with a piledriver, but Sting kicks out at two.

Ray grabs a table from under the ring and sets it up in the ring, but Sting gets on top of him in the corner and lands some rights, but Ray lifts him up and power bombs him through the table. Now Taz hands Ray a knife and Ray starts taking the ring apart. He takes away the canvas and the padding, leaving the wood. Sting tries to catch him from behind with a Stinger Splash but Ray moves, grabs Sting and hits a piledriver on the wood, but Sting again kicks out at two.

Ray wants another one, but Sting back drops Ray. Now he wants one of his own, but can’t lift Ray, who back drops him. Ray to the second turnbuckle for a flying senton, but Sting moves. But he grabs Ray and hits the Scorpion Deathdrop on the wood, but Aces & Eights hits the ring and goes after Sting.

Sting tries to fight back and he is able to low blow everybody to break free. Devon throws the chain into Ray, but it’s too far and Sting gets it and clocks Ray with it. He covers, but Devon pulls Earl Hebner out of the ring. Sting now going to the top, but Ray has the hammer and hits him with it on the way down and that does it.

The next TNA pay-per-view is Bound For Glory on October 20.

Following a video package, Todd Keneley, Mike Tenay and Taz welcome us to tonight’s show, a nine-match affair from Boston.

I wish I could tell you what happened in this match, but due to Xfinity being horrible with their pay-per-view service, I was again late getting into the pay-per-view because I was tied up on the phone with this jokers. So, my apologies. But the final few minutes of this were exciting.

But in the end, it was Sabin who held off King on the top to win it.

Aces & Eights gets control of Magnus after the good guys ran wild for a bit. But Brisco gets a little cocky on Magnus and he’s able to bring in Hardy. Bischoff gets a Twist of Fate for his troubles as he got involved. Brisco from behind and tries to work, but Hardy hits him and then clobbers him with the Whisper in the Wind. The match breaks down and Hardy hits two Twist of Fates and then wants the Swanton Bomb but Bischoff drops Hardy off the top. Bischoff is a little cocky and turns right around into a pummeling from Joe, capped by the snap mare into the flying elbow from Magnus. Joe goes after Anderson on the outside and puts him in the Coquina Clutch on the ramp. Brisco low blows Magnus and tries to pin him for some unknown reason, but Hardy rises and hits the Swanton on Brisco for the win.

Bradley in control. This is all Bradley through and through and he finishes Shaw with the Boom Stick and that does it.

After an attack by Aces & Eights earlier in the night, Park is unable to make it to the ring and is counted out.

Devon gets on the mic and says if Abyss was here, he’d beat him up just as bad as he did his brother. Of course…

After Abyss takes out both Devon and Knux as he comes in, some Knux interference behind the referee’s back allows Devon to take over. But Abyss gets rolling and hits a big avalanche in the corner, then he takes out Knux. He follows with a choke slam on Devon. Abyss with an Irish whip and he ducks down, but Devon hits a kick. Devon goes off the ropes, but runs right into the Black Hole Slam and that does it.

We get a battle of strength between Herandez and Gunner, but that’s broken up by the heels. Things break down from here. Hernandez and Guerrero head up the ramp and come flying back with flying shoulder blocks that take out Bad Influence. Guerrero in there with Kazarian and hits the Three Amigos. Daniels comes in, though, and delivers Angel’s WIngs. It’s all breaking down again now.

Storm hits Roode with the Back Stabber and wants the Last Call Superkick but Daniels hits him in the leg with the belt behind the referee’s back. Hernandez gets ahold of Kazarian and hits him with the Border Toss and Guerrero hits the Frog Splash. He goes for the cover, but Daniels comes in and hits Guerrero with the title belt and that’s a DQ.

Roode quickly covers Guerrero and pins him after the belt shot.

The two teams go back-and-forth. Gunner gets Roode in the Gun Rack but Aries breaks it up. Aries hits the corner dropkick into the Double R spinebuster. Aries goes to the top and hits the 450 Splash but Gunner kicks out at the last moment. Aries is in shock. Storm hits Aries with the Codebreaker. Storm lines him up and hits the Last Call Superkick and Gunner lifts him for the Gun Rack. Aries taps.

Kim goes and locks in the Figure Four on the ring post. Kim goes for the flying crossbody, but Terrell moves, and Kim goes flying into a steel chair propped in the corner and then to the floor. Kim is not moving. She finally makes it up, but Terrell returns the favor and locks in the Figure Four on the post. Terrell goes flying with a dive onto the ramp but Kim moves and Terrell crashes and burns. They battle on the ramp and Terrell charges, but Kim sidesteps and sweeps the leg. Terrell down but rises at nine.

Kim grabs Terrell and wants a piledriver on the ramp, but Terrell reverses it and hits an Ace Crusher off the ramp and onto the floor. Terrell is up at nine and Kim cannot answer the count.

Styles going after Angle’s leg. Styles counters Angle and wants to go for that Calf Killer, but in getting it locked in, Angle is too close to the ropes and immediately gets them. Styles with a picture-perfect dropkick. Angle, though, starts to fire up. He hits some clotheslines, punches and then a big belly-to-belly throw. But it’s going back-and-forth. Styles with a spinebuster and then a nice springboard moonsault for two.

Styles back in control. He goes to the top for a moonsault, but Angle charges up and sends Styles into orbit with a belly-to-back suplex, but Styles rotates through and lands on his feet, but goes right back to Angle, who launches him with a belly-to-belly right into the corner. WOW. Styles, though, fights back, but gets hit with an Angle Slam for two. Straps come down for Angle and he locks in the ankle lock. Styles rolls through and sends Angle into the turnbuckle and catches him with the Calf Killer. Angle rolls it through and reverses it in the ankle lock.

Angle has it locked in. He pulls Styles back and scissors the leg, but Styles is able to use ax kicks to the arms to break the hold. Styles with a backbreaker. He goes back to the apron and wants the 450 but Angle moves. He goes for a rollup but only gets two. Angle wants Angle Slam but Styles counters, only to be re-countered by Angle, who gets Styles with a double leg into a stacked up cover for the pin.