Take professional wrestling, several different monsters and creatures, blood and gore, the Mortal Kombat video game, and some tongue-in-cheek humour, mix it in a blender and you might get a little closer to director Jesse T. Cook’s independent film Monster Brawl.

Originally filmed in Collingwood, Ontario, Monster Brawl had its debut at the 2011 Fantasia Film Festival and was chosen as the opening gala film at the 2011 Toronto After Dark Film Festival. The film did not have a theatrical release, but was later released in 2012 on DVD. 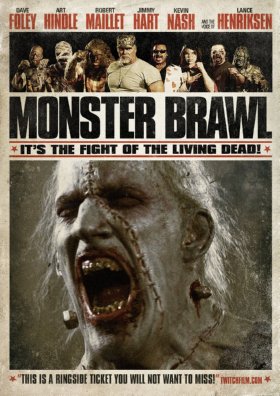 The plot of the film is a tournament held in a wrestling ring in a graveyard where various monsters and creatures fight for supremacy to eventually be named champion. The film heavily features Dave Foley of Kids in the Hall fame in the role of the play-by-play commentator along with Art Hindle as the colour commentator. Both liven up the film considerably and from all appearances seem to be having a ball with their roles.

“The Mouth of the South” Jimmy Hart also appears as himself in the film to interview the independent promoter who is putting on the Monster Brawl and to do the ring intros and other bits of commentary. Hart is quite funny, particularly when he is interviewing the promoter about the Monster Brawl by using a great deal of physical acting and facial expressions. There is also a great bit with Hart that appears after the end credits of the movie.

Kevin Nash also appears in the film as Colonel Crookshank, the trainer of one of the combatants in the tournament, Zombie Man. Nash plays his role fairly straight and doesn’t actually partake in any of the in-ring matches except to interfere at one crucial point. However, the end of the film hints at a future fight involving Nash’s character should there be a sequel.

Lance Henriksen also provides the movie with some great voiceover work that helps to add to the mood of the movie. A great deal of the other monster roles are played by various wrestlers, including Robert Maillet (a.k.a. Kurrgan), Kelly Couture, Jason David Brown, R.J. Skinner, Rico Montana, and Holly Letkeman.

As for the movie itself the intro credits are a bit monotonous and drag a bit, but some of the background features of the various creatures are quite funny and brought a chuckle or two. The in-ring action could have used some judicious editing to speed up the pace of the matches and some greater creativity should have been used to vary the fights. As a result many of the fights come off as repetitive. Too often they descended into very slow punching and kicking instead of being innovative and using their own ripped off limbs as weapons. The fights themselves though are where the Mortal Kombat allusion happens; when a combatant hits a big move there is a voice over that simply says something like ‘superb’ just as it does in the video game.

The matches at times do feature a degree of blood and gore which might be a bit too much for young children. There is also some over-the-top grossness too. Yet the one thing that comes through while watching the movie is that all the performers in the film are having a great deal of fun and that helps to alleviate some of the gorier moments in the film.

The film is very well shot and even uses green screens and special effects that help to elevate the material. However, for those who are looking for sophisticated horror such as the AMC’s The Walking Dead, unfortunately Monster Brawl doesn’t have a great deal of character development or any real subtext or metaphors that you sometimes find in other films of this genre. The film periodically comes off as a parody or farce of 1980s professional wrestling and movie monsters and that’s when it works best.

The DVD comes with a couple of extras including a behind-the-scenes feature that explains how the film came together and some of the challenges involved doing a low-budget movie, audio commentary with writer/director Jesse T. Cook, trailers, and Tales from the Hart: Jimmy Hart Outtakes. The Hart Outtakes is a great little feature because Hart talks quite a bit about his wrestling career and his thoughts on the movie.

While Monster Brawl certainly would fit under the B Movie category, it’s one that has its heart in the right place. For those looking for a fun romp and a nice diversion for a couple hours Monster Brawl is a quirky ride with a good chunk of humour thrown in.