Luigi Macera, who died on December 29th at the age of 88, was well-respected amongst his peers. “I called him The Master,” said Nick Kozak. “I met him when I started in Portland, and I just fell in love with the guy. He was a real cat. Smooth.” 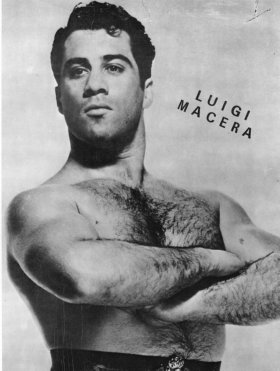 Red Donovan concurred in an interview in the Ring Around the Northwest newsletter. “Luigi Macera was one of the smoothest workers I ever worked with,” he said. “You would come out to the ring and you never felt like you were beat up. You hardly knew he was there. He was such a tremendous worker.”

On November 11, 1924 in Montreal, Pietro Davide Macera and Maria D’Aloisio welcomed twins into the world — Luigi Mario and his sister Angela. During the Second World War, Luigi Macera served in the Royal Canadian Air Force.

He started in professional wrestling at the end of the 1940s as Marshall Lewis, working for small promotions in Montreal, especially for promoter Sylvio Samson.

“He took the name Marshall Lewis because of two wrestlers he liked a lot: Everett Marshall and Ed Lewis,” said Gino Brito.

In those years, he wrestled, among others, Jack Britton, Brito’s father. “He was in Hawaii with my dad. He was very close to him,” said Brito upon learning about Macera’s passing. Macera was part of the great Italian Connection in Montreal with Brito, Tony Parisi, Dino Bravo, Dominic Denucci, and Tony Lanza.

The 1952 edition of Sid Feder’s Fan’s Wrestling Book has an entry on Marshall Lewis: “Native of Montreal, of Italian parentage, Marshall patterns himself after his idol, Champion Lou Thesz. … Although in wrestling merely three or four years, he already had held the light heavyweight championship of Canada, is a master of the dropkick and body slam and is rated one of the top dozen or so prospects in the world … was with RCAF during the war.”

In his early days, he was a light heavyweight, and was billed at 187 pounds during a 1951 run out in the Pacific Northwest. “Hitting along on all cylinders, the Italian light heavyweight champion, Luigi Mercera, continues to be a winner right down the line,” reads an April 1951 Seattle program. “The curly-topped Mercera took advantage of a missed dropkick to hemstich Mr. Sakata into the canvas last week, and has plans along the same line for ‘Iron Mike’ Nazarian when they get together in this week’s first match.” 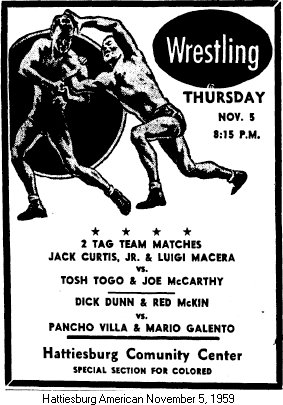 Much of his success came in the Pacific Northwest, where he held the Pacific Coast Junior title twice, and the Northwest tag team titles on numerous occasions, partners Gory Guerrero, Dick Torio, Stu Hart, and Herb Freeman. Like many territorial wrestlers, Macera worked across the continent, and abroad, including Australia. During the 1950s and 1960s, he spent time in the northern Ontario promotion, Texas, Vancouver, Calgary, Hawaii, Mississippi, and the large Utah/Nevada territory.

Over the years, a number of colleagues talked of Macera’s love of gambling, whether it was playing cribbage or bigger scores. 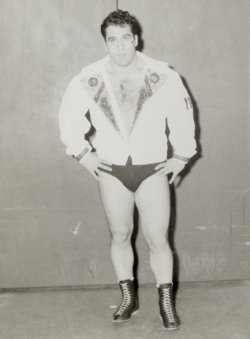 Ed Francis, who was paired with Macera to help with the French language when they were both in Quebec, agreed. “He was a real gambler. He used to play cards all the time and lose his ass. [Portland promoter] Don Owen used to bail him out and give him money.”

At the end of the 1960s and early ’70s, Macera wrestled for All Star Wrestling in Montreal and then for Grand Prix Wrestling. He also worked as a referee for Grand Prix and in northern Ontario. He was commentator for Grand Prix with lead announcer Jack Curran, as Curran had different partners in those years, including Jack Britton and Paul Vachon.

“Before he became a referee, he was putting over the younger talents,” remembered Paul Leduc.

His last recorded match was in 1978 in Verdun, for promoter Jack Britton, teaming with one of his students, Jos Ventura. 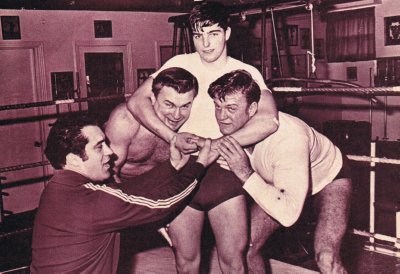 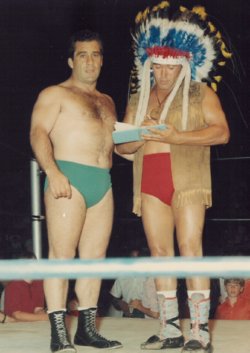 In a 1973 article in the Montreal Gazette, Macera talked about being a wrestler — that they needed padding. “A wrestler needs about a quarter of an inch of what we call protective tissue to insulate him from those tremendous falls. We like to call it protective tissue. Others call it fat.”

As well, Macera shared a story about “Nature Boy” Buddy Rogers. “One time we were in one of the plushest hotels in Fort Worth in mid-summer,” recalls Macera. “Rogers came into the lobby with a bagful of manure. While a couple of other wrestlers kept the desk clerk busy, Rogers stuffed the bag under a potted palm and walked away whistling. In a couple of hours, the whole lobby smelt like a toilet, everybody running around trying to find out where the smell was coming from. They’re still looking, for all I know.”

In the 1980s, he worked for International Wrestling as an agent behind the scenes and also took Steve Strong (Steve DiSalvo) under his wing in the last days of the company in an angle where he became his advisor as Strong turned babyface.

Post-wrestling, Macera played a lot of golf, travelled the world, and was a restauranteur.

“Luigi lived a life that most of us could only dream about,” reads his obituary in the Bradenton Herald.