Manuel Chaij Sr., who died on December 29th, at the age of 85, was billed as Argentine Zuma and The Amazing Zuma in an attempt to copy the famed Argentina Rocca — and naturally there were a number of high-profile matches between them. Yet with a career that spanned from the 1950s to the 1970s, he would not have wrestled for so long without talent.

Compared to Rocca, Zuma was much smaller, 200 or so pounds to Rocca’s 220 pounds, and he was decidedly shorter. 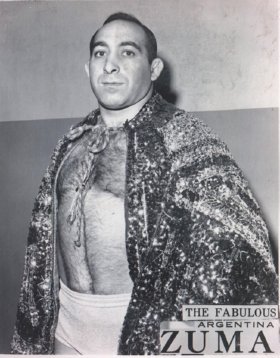 But their styles were nearly identical. Here’s a write up on Zuma from a New London, Connecticut newspaper in August 1954: “Zuma is a showman as well as a wrestler. He combines backflips, somersaults, cartwheels and similar acrobatic stunts to keep his opponent off guard and to provide a good show for the fans. He leaves little to be desired as a wrestler and has the strength, speed and know-how to make for an interesting night of action.”

In 1960, a newspaper in Petersburg, Va., compared them: “Like Rocca, Zuma enters the ring barefooted. He has perfected Rocca’s trick of leaping high in the air, touching his toes and then falling on his opponent.”

And, like Rocca, Zuma’s origin is from South America.

Manuel Chaij Sr. was born December 15, 1927 in Cordoba, Argentina. (Rocca was born in Italy, but discovered for wrestling in … Argentina.) An accomplished gymnast, he represented his country at the 1948 Olympics in London, though according to the 1948 Official Olympic Report he was not one of the seven-member Argentine squad that competed.

According to his son, Elias Chaij, he started to wrestle in South America. “He did a lot of wrestling with a group of people in Argentina, which were the Romo brothers out of Venezuela,” he said. “A little bit of the political game; he’s not from the capital, he’s from inside the country. He ended up in Brazil and different other countries, competing more than in Argentina.”

The chance came up to move to the United States around 1951, and he had family around Boston. Local promoter Tony Santos is believed to have given him his first bookings.

“He wrestled in Mexico, and had some success there, probably before getting his papers in order in the U.S.,” said Elias Chaij, adding that his father suffered an injury in Mexico that forced him to the sidelines for close to a year.

In the early-to-mid 1950s, Chaij Sr. fell under the influence of famed talent scout and promoter Jack Pfefer (who had earlier promoted Carl Engstrom as Zuma, the Man From Mars).

Early matches in 1953 are in New England and in the West Texas-New Mexico area, where he was with Pfefer regulars like the Elephant Boy and Slave Girl Moolah. Zuma’s first splash was when he landed in Corpus Christi, Texas on July 22, 1953 as a sub for Gorgeous George Baron and beat Mr. America (not Gene Stanlee) for the Eastern championship belt.

Zuma was often billed as a junior heavyweight champion and fought a young Maurice Vachon, Danny McShain, and The Sheik. He had all the hype of Rocca, as he was promoted as the Argentinian amateur champ and the Portuguese amateur champ during one swing in 1956. Occasionally, promoters billed him from Puerto Rico as well.

There were two NWA Texas tag title runs for Zuma, one in 1956 with partner Ray Gunkel and one in 1959 with Johnny Walker.

When Pfefer’s influence in New York increased, he helped Zuma get booked in the territory in 1959 and 1960, leading to some of the biggest matches of his career, including bouts at Madison Square Garden.

Willie Gilzenberg wrote to Pfefer on August 18, 1958: “All that was necessary on the Garden show the other night was to team up [Ricki] Starr and Zuma against [Johnny] Valentine and [Dr. Jerry] Graham and the Fargos in against Rocca and [Miguel] Perez–but as we both agree–that’s their problem, not ours,” he penned. “The only move to create Zuma a top figure has been made. Now all we have to do is to have patience and wait. We simply cannot move the clock hands.”

In another letter, dated September 2, 1959, Gilzenberg praised Pfefer’s publicity: “Did you see Zuma’s picture in Ring Magazine? The right kind of publicity also — the mysterious type.” 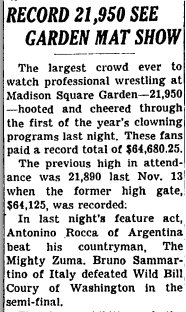 The New York Times even acknowledged the success of Rocca vs. Zuma. This clip is from their Jan. 2, 1960 bout.

The babyface vs. babyface match was unique, especially for a main event. “The conduct of the crowd was above reproach,” reported The New York Times after their Nov. 13, 1959 bout. “Nothing more lethal than putty balls and crushed paper cups was thrown into the ring.”

Subsequently, the successful, short run at MSG was used to promote Zuma from then on. “The promoter announced on TV and radio two days before the match it was a sellout and told fans without tickets not to appear,” reads a story previewing a Zuma appearance in November 1959. “However, 10,000 showed up and were turned away. Another record was set for a wrestling match at the Garden when $64,125 was taken in at the Zuma-Rocca bout.”

In the late 1960s, Zuma was a regular for Jim Crockett, based out of Charlotte, NC. He was mostly in undercard tag matches, and tagged alongside Sailor Art Thomas was a strength and speed team, as well as with Nelson Royal and Scott Casey.

In 1975, he was working in early matches for Leroy McGuirk in Mississippi, Arkansas, Missouri. 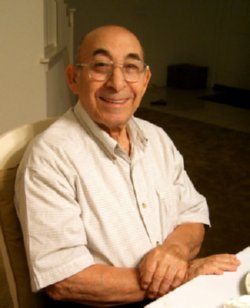 One of Zuma’s legacies is the training of Ann Lake, a woman wrestler in New England. Like Zuma, she was a high flyer. “I don’t know any other woman wrestler out there back then who was doing what I did,” Lake said in a newspaper article celebrating her induction into the New England Hall of Fame. “Those of us that were lady wrestling, we were sort of paving the way then. We drew in good-size crowds.”

He married his wife, Mariam, in 1961, and they had three sons, Elias, Jorge and Manuel. In 1975, he returned to his native Argentina in 1975 with his family where he retired from sports and pursued several entrepreneurial endeavours — in South America, he helped run sand and gravel mines, as well as different clothing stores and factories with his family.

In 1984, Chaij returned to the United States, settling near his sons in California. He tried a number of commercial ventures, including a pizza parlour, Zuma’s Pizza, in Rosamond, Calif., and other restaurants with his family.

He died on December 29, 2012, in Rancho Cucamonga, California, after a two and a half month hospitalization. Twenty years ago, he’d had a quadruple heart bypass, and only a couple of years ago, he again had open heart surgery. The heart problems, combined with pneumonia and kidney failure resulted in his death.

Manuel was predeceased by seven brothers and sisters. He is survived by his wife Mariam, his three sons, Elias, Jorge and Manuel, and nine grandchildren. He is also survived by his only two living siblings, Side and Jose.