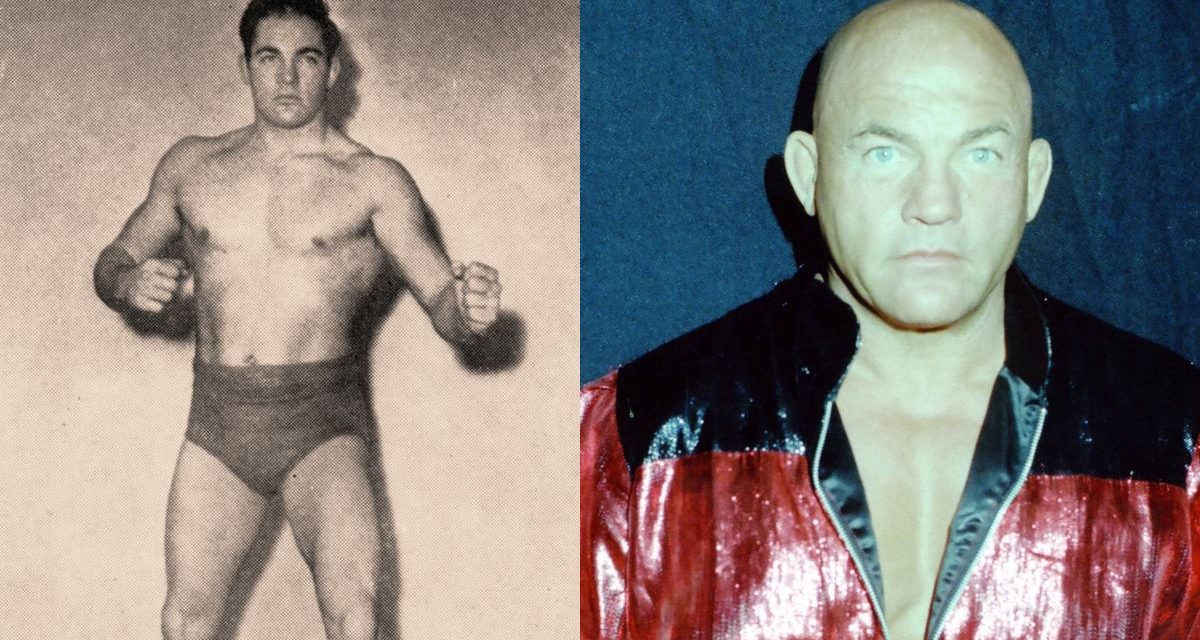 When Gordon Nelson spotted a young Marie Laverne at a Charlotte swimming pool, he didn’t know that her mother and stepfather were wrestlers. They would be married for a dozen years, and remain lifelong friends in Amarillo, Texas, where their son, Steve, also lived. Shortly after Gordon passed, Marie shared her memories of their lives in and out of wrestling.

As the daughter of pioneering woman wrestler Ann Laverne, Marie was raised by her stepfather Pancho Villa (Bobby Lane, Bobby Pico), who was also a wrestler. Her biological father was women’s wrestling majordomo Billy Wolfe.

Naturally, Marie travelled a lot with her parents, but she was not encouraged to enter the wrestling business; in fact, it was the opposite. 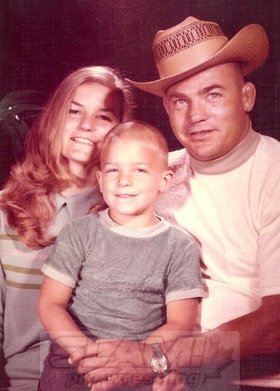 In the summer of 1962, the Charlotte, NC, territory would feature Laverne, Nelson and Pico on various cards. The other woman wrestler in the area was Penny Banner.

For recreation, the wrestlers hung out swimming. “It was a public pool, but almost all the wrestlers went to that pool there,” recalled Marie Laverne, adding that there were a lot of families there.

The would-be suitor waited for Banner to hop in the pool before approaching the young beauty that caught his eye.

“He really didn’t know that Ann Laverne was my mother. He said something about knowing the other lady wrestler [Banner] and had watched her wrestle. He said, ‘Talk about somebody that I don’t even want to come up to, she’s kinda rough.’ I never said nothing.”

Nelson offered to put suntan lotion on Marie’s back, and, after initially rejecting the offer, she relented.

Up came Ann Laverne, outside of the pool compound.

“Do you know her?” asked Nelson.

“That’s my mother,” responded Marie, laughing at the 50-year old memories. “He was bound and determined that he was going to take me out. It went from there. That’s how the story went. Everybody was laughing about that. They’d say, ‘Don’t step on Annie and Pancho’s mountain, because he’s got a gun and a knife.'” 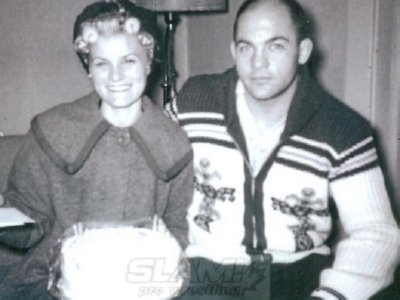 1963: The year Gord and Mary Nelson were married.

Gord and Mary were married not long after, on May 31, 1963, just a private ceremony without any guests or fanfare. It was Nelson’s second marriage.

Their first stop on the wrestling circuit after the nuptials was Houston, Texas, and immediately the gossip started.

Her husband always kept a level head, said Marie. “Gordon, he didn’t pay no attention to it, he just let it go. There’s 11 years difference between him and I.”

A well-respected shooter and tough guy, Nelson could really hurt someone if he wanted to. “He could break a man’s jaw with a backhand. That I know for a fact. He was powerful,” said his ex-wife. 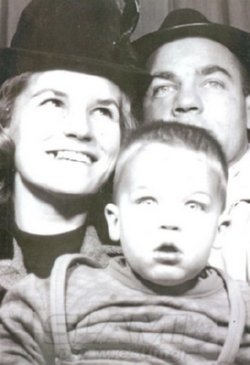 Gordon Nelson 1963 in London with Mary and Steve.

But usually he tried to avoid trouble. “We could be at a party and a fight would be starting, and he’d say, ‘C’mon, it’s time to go,'” she said. “But you did not want to start nothing with him.”

The Nelsons had their son, Steve, on November 23, 1963. When he was three months old, they all moved to London, England, where Gordon Nelson was a “well respected” star. Aside from a trip when Steve was two to visit his grandparents, they stayed in England until he was about four years old.

Gordon made a lot of friends in England, Marie said. One that had a bumpy start was Al Hayes.

“I remember the first time he ran across Al Hayes. Al Hayes was young, just starting more or less,” she began, making note of Hayes’ judo background. “He wanted to know who he was going to wrestle. They pointed Gordon out. Of course, Gordon didn’t have no hair on his head, and he was smoking a cigar. He said, ‘You mean that old man over there?’ They said, ‘Well, you’d better hope he didn’t hear that.’ He just really thought he was going to turn Gordon inside-out. Boy, he got some other news on that one. He had a lot of respect for Gordon after that. But Gordon never said nothing, he’d never say nothing at all. He’d just sort of grin, go back to his business.”

The native of Winnipeg, Manitoba, was not one to boast, said Marie.

“If I found out something about him that he didn’t think I knew, for wrestling and shoot-fighting type stuff, he’s go, ‘Who told you that?'” she said. “He just never bragged on himself, never. He said, ‘When you know you’re tough, you don’t have to say anything.'” 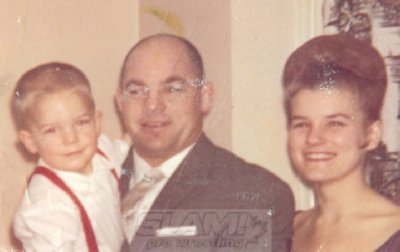 One of Marie’s passions was riding horses, and she would put her young son in the saddle in front of her. Her husband’s calmness — and toughness — followed into the equestrian world.

On one occasion, Gord and Marie had to ride across London to get some needed shots for the horses, which entailed riding on the roadways a lot. Gordon rode Outspan, a great big horse that often wanted to try to be a racehorse. On the trip over, things went smoothly. On the way back, Outspan got ornery and jumpy. With one slap of his hand, Gord got Outspan back in line; “like a statue, he froze,” said Marie.

In general, Gordon liked to do different things. “He said he was a jack-of-all-trades and a master of none. He’d take an engine apart in the car and put it all together again.”

When Steve was five years old, the family moved to Florida, where Gordon had been booked. Marie brought along her Siamese cats that she was hoping to put in cat shows.

There would be a different road for her.

They got a call from the promoter, saying that another woman wrestler was unable to make the show and they needed help.

“Somebody had told them that Ann Laverne was my mother, and so they called Gordon and asked Gordon, Did I wrestle? Could I wrestle? Because they needed a girl in there and they didn’t have time to bring one in,” Marie remembered. “He said, ‘Well, she’s never wrestled, but she’s athletic. But you’re going to have to talk to her. I’m the wrong person to talk to.’

“My mom never wanted me to wrestle. She always said she’d break my arms and legs. They got me on the phone, and I looked at Gordon. He said, ‘That’s your decision, Mary. You do what you want to do.’ So I thought about it. He said, ‘We really need you, if you could just fill-in now.’ I said, ‘I don’t wrestle. My mom might be Ann Laverne, but I don’t wrestle.’ It ended up, they booked me, and he said, ‘I think you’d better call your mom.’ So I called her and Mom really wasn’t happy.”

When she told her mother, Marie was unable to answer as to who her opponent would be. A quick call back to the promoter revealed the answer.

“I talked to my mother and she wants to know who I’m supposed to wrestle.”

Of course, Mae Young and Ann Laverne went way back, with Young having some of her first matches with Laverne. 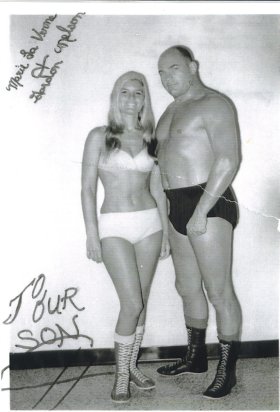 After that bout, Marie Laverne was off and running in the wrestling business.

A May 1974 issue of Ben Strong Wrestling headlined “Maria Laverne Tempting Tigress” and wrote about her “extraordinary combination of beauty and wrestling skill.”

“Maria also inherited her father’s temper which has unhappily surprised many opponents,” reads the story. “Her punches are devastating, her holds are sensational, and her speed almost legendary.” 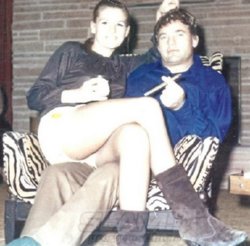 Gordon Nelson with Mary Nelson at a party at Dory Funk Sr. House 1975 Gordon had a wig on.

Also hereditary were the wrestling genes passed down to their son, Steve. With his father on the road, Steve Nelson learned a lot of wrestling moves from his mother, who would sign out books from the library to study up on amateur techniques. Steve would have an illustrious wrestling career at Oklahoma State University, and followed that up with silver medals at the 1991 and 1994 world wrestling championships. As well, he was one of the early notable names in mixed martial arts, with a 14-3 record. Today, he is the head coach for the Palo Duro Dons at Palo Duro High School in Amarillo, Texas.

The Nelsons split in 1976. “He didn’t want the divorce; I got the divorce,” said Marie, who kept the Nelson last name. “Just too much going on, it was best to get the divorce. But I never remarried. He remarried.” Gordon Nelson would have a second son, Gordon George Jr.

With both living in Amarillo and their son a common bond, the Nelsons stayed friends until the end.

“Gordon’s Gordon. Regardless of what went on between him and I in marriage and stuff, but as far as being a friend with him, you can’t really say anything about Gordon because I didn’t know anybody that didn’t like Gordon. Gordon was good to other people, didn’t care. You had to cause a problem for him to get in trouble with you,” she said. “I would never let anybody say anything bad about Gordon, because he never gave me any reason to say anything bad. What went between him and I is one thing, but you can’t talk bad about him. I won’t have it. That’s just who he was.”

She was a regular presence at the rest home, when Gordon’s health deteriorated to the point that his son couldn’t care for him. His first major stroke, when he was about 67, forced Nelson off the road for World Championship Wrestling, where he was in charge of taking one of the rings from venue to venue. While he recovered from the paralysis all down the right side of his body, eventually learning to drive again — and buying himself a new car — several other strokes would follow.

Laverne gets wistful thinking about one of her last visits with Gordon.

He had a jacket shirt that he just wore away, wearing it so often. She bought him another just a week before he died.

“I said, ‘Here, I got you an early Christmas present.’ They had [an] IV in him, and he was sitting in a chair. I put his right arm in it. He leaned forward and I put it behind his back and up over his shoulder. I said, ‘This is your new one.’ Oh, he liked that!”

When she returned the following day, she found him in bed with the shirt on, still with just the one arm in a sleeve.