TORONTO — When the indy dream match of the Dragon Gate USA champion, Johnny Gargano, against the Ring of Honor champ, Kevin Steen, was changed at the last minute to a tag team bout on Sunday afternoon, expectations were that two of the newcomers, Tyson Dux (with Steen) or Scotty O’Shea (with Gargano) would take the fall. But at the end of the mayhem, wholly unexpectedly there was the DGUSA champ pinning the ROH champ after six brutal kicks to a defiant Steen. 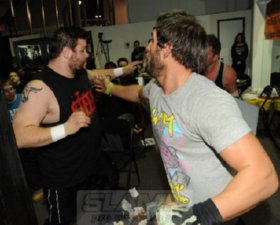 The bout, which was on the second-ever card presented by Smash Wrestling at The eZone in Toronto’s west end, delivered far more than expected, even if it was less Gargano versus Steen than anticipated.

For the first 10 minutes, the teams battled on the outside of the ring, using crutches, teeth, garbage pails, chairs, and a keyboard as weapons. Steen, ever the aggressor, still found the time to complain: “Johnny Gargano is assaulting me! This is unacceptable!” When a normal, regulation tag team match broke out, it was entertaining and some good teamwork was demonstrated despite the newness of the pairing. The highlight was probably O’Shea hitting a moonsault onto Dux — whom he had battled to a 20-minute draw earlier in the afternoon — off the bar.

Alone in the ring, Gargano kicked away viciously at Steen. It took four kicks to Steen to bring him to the ground, whereupon he cried out in rage, prompting two more, leading to the surprise clean pin.

Post-match, Gargano was reflective in the dressing room.

“It’s a first-time ever thing between me and Steen and people were excited about it,” he said. “It’s the first time ever being in the ring together. The DGUSA champion and the ROH champion, you don’t get to see that anywhere, really, so people were very excited.” Gargano took the Smash Wrestling booking without knowing who he would be facing, and first learned about the match-up through Facebook.

The singles bout was changed to a tag team match after O’Shea and Dux went to a draw. Steen arrived to bad mouth O’Shea, accusing him of stealing his thunder on previous shows. Naturally, Gargano arrived to even the odds.

Steen was banging up — particularly his back — following the ROH TV taping at the Du Burns Arena in Baltimore on Saturday, prompting the switch. “My back is f—— shot,” Steen wrote on his Twitter feed. “Looks like Gargano might have caught a lucky break. Still gonna to try to make him retire though!”

The fans that packed the venue didn’t get upset when it went from a singles to tag match.

“When we found out the situation, it was one of those things where, ‘Oh God, people are going to be disappointed. They came here for that particular match and we can’t deliver it,'” explained Gargano. “But by the same token, I think we delivered something completely different than what people expected. We delivered something absolutely crazy, things got out of hand. I think we gave the people their money’s worth. To me, the way I know if I did a good job, if I’m giving that post-show speech, I’m saying goodbye to people, and they’re up, they’re happy and they’re having fun. I can see the smiles on their faces and they’re not let down at all, then I know I did a good job.” (Initially, the microphone didn’t work post-match, so Gargano delivered a couple of People’s Elbows.)

Gargano hopes to get a chance at Steen again.

“It’s unfortunate how it turned out, that it had to be a tag match, but I hope maybe down the line maybe me and Steen will go at it one more time, because the people want to see it and I think we can deliver something special,” he said. “The buzz factor behind that match shocked me.” 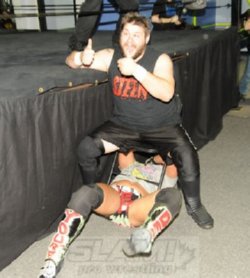 The two know of each other but don’t know each other well. “Me and Steen never work in the same places; we’ve maybe done one or two shows together, tops,” said Gargano, DGUSA’s Open the Freedom Gate champ since November 2009. “Wrestling is a very small world, we travel countless hours to go to shows all over the world. It really shocked me that I hadn’t wrestled Steen yet, because the ROH champion is available, the DGUSA champion is available, put them in the ring together. I’m happy that it happened for Smash Wrestling. The crowd tonight was absolutely electric.”

When asked about who’s out there that he still wants to work with, Gargano mentioned that he had just fought Michael Elgin, and would like to tangle with Davey Richards again, who he’s only wrestled once. Eddie Edwards was another name he’d like to face.

But the one that sprung to mind, he wants the DGUSA booker, Gabe Sapolsky to take note of.

“Believe it or not, one guy I’ve never wrestled, and a key name with Steen, and we wrestle in the same places all the time, is El Generico,” he said. “I’ve never wrestled El Generico in a singles match. The people have been calling for that for a while, but no one’s booked it yet — so Gabe, if you’re listening, book it.”

Booking a champion versus champion bout meant some negotiations with both Dragon Gate USA and Ring of Honor. Smash Wrestling was asked not to promote it using the title belts or capitalizing on the promotions themselves. Yet the fans knew. 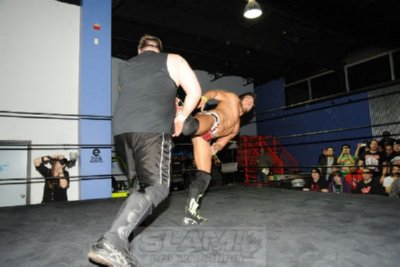 Johnny Gargano delivers one of his finishing kicks to Kevin Steen.

Coming up for Gargano is his first-ever trip to California, when Dragon Gate USA has three shows — Jan. 25 in Santa Maria, and two shows, Jan. 26th and 27th, in Huntington Park. He was hurt the last time DGUSA went west. “I already had my plane ticket booked, but unfortunately I couldn’t get on the plane because I was injured, that’s when I had my back injury. I’m not hurt now. I’m 110%, so I will be in L.A. and I’m very excited. We’re going into, not a new market, but a market we don’t run very often. So going into a market we don’t run very often is always kind of a gamble, but L.A. is such a big wrestling fan base and I hear nothing but great things about those fans, so I can’t wait to go out there and show them what I’m all about.”

He doesn’t know his opponents yet, so maybe, just maybe, there’s a chance for that bout with El Generico.