Many years ago, wrestling heels knew the wrath they’d face each night. Grannies sitting at ringside would swing their purses at the villains, greaseballs would hurl weapons. Being a heel could be painful — in an out of the ring. That’s changed a bit. 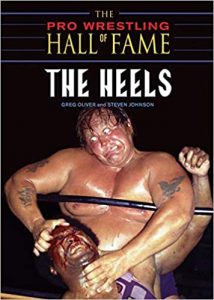 “Wrestlers don’t want to be hated now … if they’re hated, they won’t sell merchandise.” This book is a magnificent blast from the past, with terrific stories of the heels an older generation grew up watching, plus some of today’s bad boys. “What sets this book apart is it tells stories about people, not wrestlers,” says Oliver.

WE’LL MISS DEWEY: Dewey Robertson, who had been batting cancer, died early Thursday morning in Hamilton. Robertson was a huge star as a fan favourite in the 1970s, then morphed into The Missing Link.

NO KIDDING: Just who is Vince McMahon’s illegitimate child? Tune into Saturday Night’s Main Event tonight and you’ll be given four candidates. I loved Coach on RAW, deadpanning to McMahon when it was suggested The Boogeyman could be the boss’ kid: “Well sir, he does have your eyes.” It would have been a great angle to reveal Triple H as Vince’s son.

CRUSH DEAD: Brian Adams, who wrestled as Crush, the third member of Demolition, and later as Kona Crush, died on Monday. Adams, who was 43, also teamed with Bryan Clark as KroniK.