Standing 6-foot-7 and weighing in at 350 pounds, Abyss truly lives up to his nickname: The Monster. Having been full-time with TNA Wrestling since 2003, Abyss can truly say that he’s done it all. When defining Abyss’ career thus far though, one must not remiss the fact that this man is one of the only in wrestling history to have a match created and named after his character.

“The Monsters Ball” match was created in 2004 as Abyss’ own choice of contest in a feud with Monty Brown and Raven at TNA’s Victory Road PPV. The contest, which involved all sorts of hardcore weaponry would go on to cement Abyss’ character and in-ring style as one of the most brutal hardcore combatants of all time. 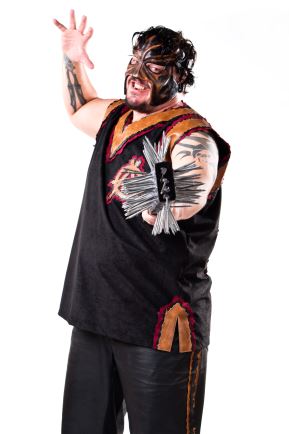 Abyss and his weapon of choice. Photos courtesy TNA

When looking through the list of gimmick matches created in professional wrestling, the list of contests that have been created for and named after a character are few and far between, so for Abyss to have a match named after him is a great honour.

“I’m proud of it,” said Abyss. “Everyone knows what The Monsters Ball match is and everyone knows there’s a certain level of expectation.

“I believe it’s become a staple of hardcore wrestling, it’s definitely been a staple of TNA Wrestling throughout the years. It’s neat in a very humbling way that I’ve got a match that I was able to create and name after myself.

“The fans always know when they watch a The Monsters Ball, they know they’re in for something entertaining and enjoyable, crazy and hardcore.”

However, Abyss admits that at age 42 The Monsters Ball, while being his creation, can be a little taxing on his health.

“I’m not getting any younger it’s true, but I still do them frequently.

“I do still feel I can do them, but obviously there’s some things I can’t do that I used to, but for the most part I can. The one thing about The Monsters Ball is it’s a fight and I’ve always been good at fighting, from my Puerto Rico days in IWA all the way through TNA.

“The Monsters Ball is not a wrestling match, it’s a brutal, hardcore, weapons filled fight. I do sometimes feel I get pigeon holed into them because of the character but I have myself to blame for that.”

A new lease of life for Abyss, birth name Chris Parks, is becoming an agent for TNA Wrestling, something that he is exceptionally proud of.

“I never thought I would get the feeling of success and reward like I did with in-ring competition but I was wrong. Being an agent has taught me so much about the wrestling business.

“It’s taught me humility, that I can have a great feeling of success inside of me. When I see a match that I’ve helped out on and they’ve killed it, hit a home run, I get a great feeling, that I helped them attain that success.

“The talent are the ones that go out and do it obviously, but it’s like being a football coach you’ve helped mentor, motivate and mould the match. It’s the greatest feeling in the world. I really cherish my agent role, it’s challenging but with the young guys we have now, they make it easy.” 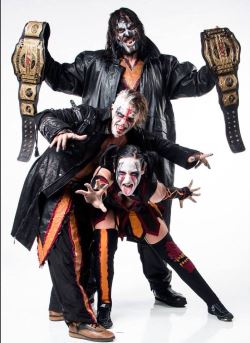 The new influx of talent into the company such as Mike Bennett and Moose gives Abyss a hunger and drive to keep going both in-ring and out, he praises the new blood that’s come into the company for their determination and drive, especially mentioning his Decay faction mates, Canadians Crazzy Steve and Rosemary. Currently, Abyss and Crazzy Steve hold the TNA world tag team championships.

“Being involved in The Decay has been exciting,” Abyss said. “I’ve been with TNA Wrestling for 14 years, full time with them since 2003, I’ve done just about everything there is to do, so to now have something different like this is really refreshing, it’s new something different from me, everything is just falling into place and we really came out of nowhere.

“I credit Crazzy Steve and Rosemary a lot for that, they’ve been incredible to work with and to me it’s a great mixture with great chemistry. The presentation is phenomenal, the entrance, the look, the music provided by Marilyn Manson has been a huge benefit.

“The writing team, Matt Conway, Dave Lagana and Billy Corgan have done an excellent job of building up The Decay and moulding the group.

“We’re in a prime spot, I mean we’re the TNA world tag team champions right now, so with that comes a lot of responsibility and we’re targeted by every tag team in the company. We’ve got to be prepared for it, but the group looks out for each other in and out of the ring. It’s reinvigorated an already great career for me.

“I thought I’d done everything I could do. When I retire one day I’m gonna have such fond memories of the business and in particular TNA.”