Brian Adams, who worked as Demolition Crush and was half of the KroniK tag team, has been found dead. He was 43.

A Tampa Police Department report obtained by TMZ.com indicated that Adams “was found by his wife unconscious in bed not breathing.” She called 911, but medical personnel were unable to revive him. He was pronounced dead at the scene. No reason for his death was noted in the report. 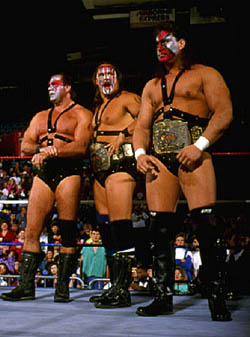 Adams was a boxer in the U.S. Air Force, stationed in Japan, when Antonio Inoki discovered him and talked him into going into professional wrestling. When his time in the service was up, he trained in the New Japan dojo for a year. He was one of two gaijin, or foreigners, to make it through the New Japan dojo in the 1980s. The other was Chris Benoit.

In the United States, Adams debuted in the Pacific Northwest in 1986, which was one of the few remaining territories left. He was named The American Ninja under a mask, and teamed with “The Grappler” Len Denton as The Wrecking Crew for a time. The duo held the Pacific Northwest Tag Team titles, feuding with Steve Doll and Rex King. Later in 1990, Adams was Pacific Northwest heavyweight champ. He lost the title to Scott Norton.

In 2006, Norton talked about Adams. “I always had a certain amount of respect for him, because he always thought everything through,” Norton said. “He’d make the smallest decision, and he’s sitting there, you ask him a question, and give him about two minutes. He’d think about every scenario, how this could go good, how it could go bad, Then he’d answer you. But he’d use his head. A lot of guys don’t do that.”

In the WWF in 1990, Adams was thrust into the Demolition tag team with Axe (Bill Eadie) and Smash (Barry Darsow). The three shared the tag team titles in the summer of 1990, using the “Freebird Rule” where any pairing could defend the belts. The WWF wanted ultimately to phase Axe out of the team, but when they lost the tag titles, the team lost steam and was disbanded a short-time later.

When the team dissolved, Crush returned to Oregon for a stint, but would return as a “surfer-type” singles babyface in the WWF. A native of Hawaii, it wasn’t a stretch. He had a memorable run with Doink the Clown (Matt Borne) and former tag partner Darsow who was then known as The Repo Man.

Adams would run into legal problems in personal life including a short jail term for gun possession in 1995. When he returned to the WWF, Vince McMahon gave him a new persona, playing off his real life problems. A heel Crush was introduced in 1996 complete with a faux tattoo on his face and a biker-style gimmick.

After leaving the WWF in 1997, Adams resurfaced in WCW and joined the New World Order faction. He was never more than a mid-card wrestlers for the promotion, including a one-time appearance as the Kiss Demon (before the role was given to Dale Torborg), until the tag team KroniK was formed when Adams was paired with Bryan Clark. The duo would hold WCW’s tag team titles on two occasions.

The titles were a compliment to their abilities, said Clark in a 2005 interview with New Path Productions. “It meant a lot to us. I wish we’d have gotten the push we deserved instead of being held back so that we could have remained champions.”

In an interview with the same website, Adams talked about Clark. “Bryan is a great partner, we’re a soul team. We knew what each other’s next move was without a word between us. That’s a real tag team.”

Adams as half of KroniK

KroniK was brought into the WWF after the purchase of WCW, a part of the Alliance storyline. The team would feud with The Undertaker and Kane.

That was the last prominent U.S. run for Adams. He and Clark would have one strong run for All Japan, including winning the AJPW Unified World Tag Team Championship over Keiji Mutoh and Taiyo Kea in July 2002. The two would vacant the titles in October 2002, when Adams left the promotion to pursue a boxing career.

Adams would never see his first boxing match, as he suffered a shoulder injury while training for a bout with Rick Zufal in November 2002. He tried to return to wrestling but injured his back in January 2003, ending his career.

In recent years he had worked as a bodyguard to Randy “Macho Man” Savage.

– with files from Chris Schramm