Greg “The Hammer” Valentine is not about to take the freedom 55 package and retire from pro wrestling. Valentine has been involved in the sport for close to 40 years, maintaining a schedule of one to three appearances per week at independent shows.

Most wrestling fans of a certain age will be aware of Valentine’s exploits in the NWA and WWF during the 1970s and ’80s. With his induction into the WWE Hall of Fame on March 13, 2004, Valentine was introduced to a new generation of fans. 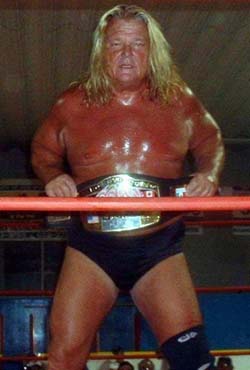 “The Hall of Fame helped set the tone for a resurgence in my career. Since then, the WWE has issued new games and DVDs where I have made an appearance. There is a new WWE Greg Valentine legends doll. I am also involved with training some WWE guys at their facility in Louisville and down here in Florida.” Valentine recently told SLAM! Wrestling by phone.

Even though Valentine is still somewhat involved with the WWE, he has strong feelings about the federation and the current state of the sport. “For better or worse, the WWE is still top of the echelon. I don’t like everything they have done, but they have helped out the legends.

“I still believe the 1980s was the heyday of wrestling. People had characters they could love or heels they could hate. Nowadays, they try and put too many storylines that have nothing to do with wrestling. I think they need to stick to the basics and emphasize wrestling. Also, doing interviews in the ring should be limited to major events. It should not be done for every minor incident.”

“I think this guy (Benoit) has tainted the business. Who was he to think he had problems when there are wrestlers with serious injuries and no money? This guy had a million-dollar contract and a beautiful house and family. He had to be whacked out of his mind to do the things he did. I sympathize with his family, and hope God forgives him. Hopefully, this will serve as a big wake-up call to the WWE and all independent wrestlers. I do think the WWE handled it well, but it should be a lesson to everyone.”

Valentine is not offering up his opinions as a retired wrestler complaining from the sidelines. He keeps an active schedule appearing at wrestling shows around North America.

“I’ve been doing shows from California to New Jersey. I also co-promote a lot of shows, so I keep going that way as well. I will be coming up to Canada to wrestle for Canadian Grand Prix Wrestling on August 24th against Koko B. Ware. I’ll be defending my heavyweight title that I won on July 7th against Quinson Valentino. I like wrestling in Canada because the fans are more relaxed and less violent than American fans.”

Joe Dunlap, promoter for Canadian Grand Prix Wrestling, is happy to have Valentine as his champion. “Working with a guy like Greg gives my company instant credibility,” Dunlap said. “Not too many independent promotions can have a name guy like Valentine as their champion. Sometimes working with some of the legends can be difficult, but I would give Greg a twelve out of ten.”

Even though Valentine is still going strong at 56, he does see an eventual end to his in-ring wrestling career. “I don’t think guys should keep going past 60. I’m working on a TV pilot with George “The Animal” Steele. The premise is that we are co-owners of a fish camp. The comedy is based around how goofy George acts. We think it has a good shot of being picked up. I’m also working on writing a book. There will be plenty of things to keep me busy after I leave the ring.”

“It is something I have to do. I enjoy doing what I have done all my life. I can also enjoy the fans now. It isn’t necessary to portray the heel all the time. I will probably continue promoting even when I quit wrestling.”

The Hammer also has a definite idea of how he would like wrestling fans to remember his career. “I would like to be thought of as the consummate professional. I didn’t like bull crap in my matches because I didn’t think it was necessary. Stu Hart trained me, and I was an old school wrestler like my father, Johnny Valentine.”

He also lists a few wrestlers as being on the top of his favourites. “Obviously, I had some great matches with Tito Santana. Rowdy Roddy Piper and the British Bulldogs would also have to be right up there. I don’t want to forget my days in the NWA either wrestling guys like Wahoo McDaniel and Chief Jay Strongbow.”

Canadian wrestling fans will have a chance to catch Valentine in action at a few upcoming shows and events. He will be appearing in Ottawa at the Wrestling Supershow on August 23 (www.wrestlingsupershow.com).

He will also be defending his heavyweight title belt against Koko B. Ware on August 24 in Cornwall Ontario (www.cgpw.cjb.net).