Monty Brown pounces back into Buffalo

BUFFALO, NY — “Wide Right!” “No Goal!” “Poooounce?” While Monty Brown’s trademark battle cry may not be as entrenched in the hearts of Buffalo sports fans as those first two heartbreaking phrases are, he is proud of his football roots in the city he affectionately refers to as “B-Lo”.

Judging by the reaction of the crowd at the recent Ballpark Brawl held at Dunn Tire Park in the city where Brown battled as linebacker for the Buffalo Bills, “B-Lo” was glad to have him back.

Sure, it’s a cheap pop, as Mick Foley would call it, but what else could Monty Brown say to the fans in what would be his professional homecoming?

“I thank you guys for the warm welcome. This is where I got it started. This is where I went to war at Rich Stadium.” The fans remembered the wars well, according to the cheers Brown received upon any mention of his time with the Bills. 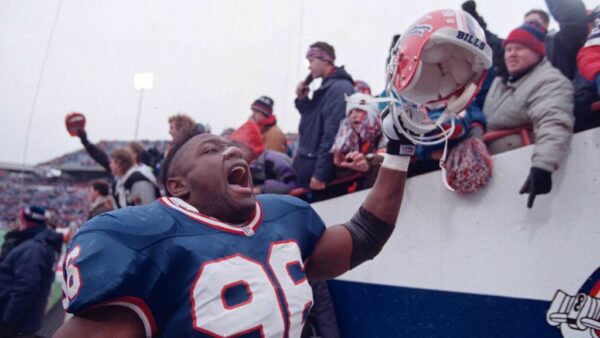 Brown gets pumped up playing for the Bills. Photo: NFL

Brown’s homecoming was to feature a match against the gigantic Matt Morgan (unflatteringly referred to as “that six-foot-eleven giraffe” by Brown), and Brown was making sure that the crowd would be on his side. “Tonight, I’m in front of the best fans in the world,” he told the gathering. “And I’ve been all over the world, but the best fans, real fans, are in B-Lo.” He then headed backstage to get ready for his match.

After keeping a safe distance while Brown and Morgan discussed their match, I was able to ask some questions about Brown’s true feelings about Buffalo. After all, what he said to the fans was really just a promo, right?

“All of it was sincere,” Brown insists, and there’s no reason to believe he isn’t telling the truth. “In character, I don’t cut those ‘Hey I’m happy to be here, thanks for having me, you guys are the best fans’ … my character wouldn’t do that. But Monty Brown would say thank you. A bunch of kids came up to me earlier saying welcome back, and that stuff feels good. It lets me know that my time here was well received and well worth it.”

While his time was indeed well received, it also served as a foundation and a starting point for his career in the NFL and eventually in TNA. It was Buffalo that drafted Brown, who was born in Saginaw, Michigan. He played for the Bills between 1993 and 1995, and then joined the New England Patriots for the 1996 season. After an ankle injury forced him out of football, it didn’t take long for Brown to pick his new career. In 2002, he made his debut in NWA-TNA.

He credits his successful transition from football to wrestling to one basic factor. “I was a huge fan when I was a kid,” he says of pro wrestling. Now, in fact, he barely follows the NFL, instead spending his time studying wrestling tapes.

And it all started in a town that he remembers for its fans. “When I would come out on that field there’d be 80,000 strong just going crazy,” he remembers. “Buffalo fans are the best in the NFL. They live and breathe the Bills, and also the Sabres. Buffalo fans love their sports. It’s a working class town, and when people work hard for their money they want to spend that money wisely. When working class families spent their money to come to the game, it’s something we took a lot of pride in.” 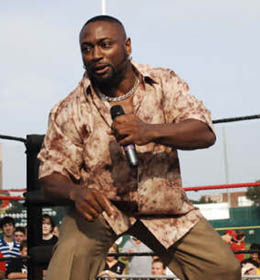 There’s no doubting the truth in how he defines the passion of Buffalo sports fans. Anyone that will endure the winter weather and lake effect snow just to see the hometown heroes toss the pigskin deserves respect. Does that automatically transfer to Buffalo’s wrestling fans, though? There’s no way to compare the 80,000 fans lining the football field to the relative smattering of fans seated in the corner of Dunn Tire Park for the Ballpark Brawl. Even with the difference in size, however, Brown sees a connection between the fans he used to play for and those he now entertains.

“I think sometimes with the wrestling fans it’s not as obvious, because they are a different breed of fans,” Brown suggests. He acknowledges Buffalo as a past locale for the original ECW as proof that the Buffalo wrestling fan walks a different line. “They’re outside of the mainstream, but they’re die-hards just the same.”

Now, with his career at a junction point — and for the record, he was very upfront about his inability to discuss current contract issues — Brown is taking a moment to simply enjoy coming back to his original sports home, and promises to put on a good show. “It’s been something I’ve been looking forward to, ever since I knew I was coming to do this show,” he says, the legitimate excitement evident in his voice. “So I want to give them something special — and just tell a good story.”

While he wasn’t able to bring back that elusive Super Bowl victory to Buffalo (“Wide Right!”), nor was he able to conjure up a Stanley Cup (“No Goal!”), Brown wishes to do what he can to deliver a payback to a city to which he owes a great debt. For their part, the fans are more than happy to see him in live action once again, be it between the lines or between the turnbuckles. No matter the sport, there’s no place like home.