Ric Carter, a longtime referee, wrestling radio show host and historian since the ’60s, died recently while trying to help someone whose car broke down on a Las Vegas motorway; the motorist sped off in a hit-and-run. Ric was one of the more ardent guys who simply loved the wrestling business, and I’d like to share my memories of my friend.

Ric was one of the first to get a large satellite dish in the early ’80s, enabling him to pick up any wrestling shows he could, and he always offered to share and trade dubs. He was a student of everything going on in mainstream sports, radio and TV. Ric was also one of the first to track TV Nielsen ratings for wrestling in the early ’90s on his 50,000-watt radio show. 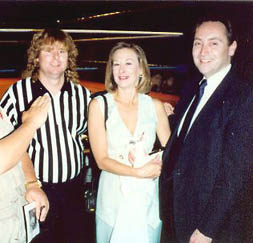 “I grew up on Roy Shire’s wrestling, I think about 1971, and was hooked,” Ric said in 2004. He’d catch Shire’s few forays into Reno and Las Vegas. Ray Stevens, Pat Patterson and Rocky Johnson were his favorite stars from that era.

A fellow photographer pal who I shot alongside at Madison Square Garden in the ’70s was “Potshot” Bill Kunkel, who lived near Ric. Ric always spoke of what a genius Bill was at doing wrestling humorist cartoons that ran in The Pro Wrestling Torch, Wrestling Then and Now, and my own newsletter, Wrestling Wreality. Bill told me that Ric actually spelled his name Rick until he became a fan of Ric Flair’s and dropped off the “K” in honor of his favorite grappler.

When Ric started his late ’80s radio show, Wrestletalk, Bill and Mike Tenay were his co-hosts and I believe it was Mike’s first ever broadcast medium experience. I came aboard as a co-host in year two and we always had a blast. When I returned to radio in 1995, I named it WrestleTalk in honor of Ric, and had him on the very first show. Ric always made a point of picking up Potshot Billy to do the weekly show (I was on by Comrex hotbox) and Ric usually took him out to dine afterwards. When Potshot had to leave the show due to heightened workload, he did a great wrestling angle “taking over the show and firing Ric” that none of us will forget. Ric Carter was a generous guy, and able to get many of the WWF and NWA/WCW wrestlers to do his show in studio, which is never easy.

Ric was also a regular fixture at the Ladies International Wrestling Association annual weekends in his native Las Vegas at the Union-Plaza hotel. The location was at the top of Fremont Street, off the more expensive Strip at Ric’s recommendation so more people could afford to make the trip there. Later, the Cauliflower Alley Club would also utilize this same hotel as CAC Executive VP Karl Lauer was also on the LIWA board. Ray Stevens’ widow, Terese Thies (a fantastic lady wrestling legend in her own right) helped to form the LIWA with Penny Banner and others; the goal being to raise money to fund a retirement center for both female and male wrestling legends needing financial help. Each year at LIWA, Ric would referee the Saturday night all ladies matches with another wrestling historian great, Jim Melby.

A few of his friends shared their memories with me:

Sheldon Goldberg: “I am deeply saddened to hear this. I’d lost touch with Ric in recent years, but whenever I made it out to Las Vegas, hanging out and breaking bread with Ric was always a highlight of the trip. Ric was one of those guys that made being into wrestling a special experience. I’d first met Ric face to face at the LIWA conventions, which were always fun to attend. I remember going to a lucha show in Las Vegas on one trip with him and Mike Tenay and his wife and being so pleased to be included in his plans. My heart goes out to his family and friends.”

“Potshot” Bill Kunkel: “Last Friday when Mike Tenay was telling me that Ric had been driving on the dangerous Route I-15 with his beloved wife Lourdes and their children on the way from Las Vegas to Mesquite when they came upon an accident scene. Ric, being Ric, stopped to see if he could help. While his family waited in the dark for Ric to do what he could, the Good Samaritan was struck and fatally injured by a hit-and-run driver. An attempt was made to airlift Ric to a hospital but it was too late.

Tenay himself was devastated, as he and his wife Karen were out of the country on a rare vacation from his duties at TNA and they didn’t hear the news until they returned home shortly after the funeral service.

They say this about everyone, but if you knew Ric, you knew he was one of the most big-hearted people to ever wander through the wrestling world. Always the first to show up and lend a hand when you had a problem, he never even played the star on his own radio show, always deferring to his co-hosts and correspondents. Year after year he supported Moolah’s LIWA Wrestling shows in Las Vegas, inviting her and Mae Young onto WrestleTalk before every show and even donning the referee’s shirt and taking the obligatory bumps in her main event. He was also a regular at the Cauliflower Alley Club, attending faithfully to bask in the reflected light of his childhood heroes.

Originally from the Dallas-Fort Worth area, Ric was an ardent Cowboys fan. And much as it will go against every drop of Giants’ blood in my veins, this season I may have to root for them, too, because ‘Hotline’ won’t be here to do that.”

“Hotline” Ric Carter was far more than a wrestling person He was a great human being, and super father to his daughter Sierra who he always asked to pose for photos with the wrestlers backstage. He will be greatly missed by the boys, and anyone lucky enough to have met him.