DETROIT — Unlike a lot of WWE superstars heading to Detroit for Wrestemania 23, Edge actually has a rich history in the city, full of a whole lot of “Sex and Violence.”

“This is one of my main starting points,” Edge told SLAM! Wrestling at the WM23 press conference, “and coming back for Wrestlemania, you can’t beat it.” 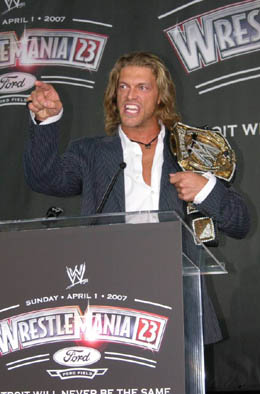 Edge talks to the crowd at the WrestleMania 23 press conference on Tuesday, July 25, 2006 in Detroit at Ford Field. Photo by Chris Schramm

Edge was part of a tag team in the mid 1990s with former WWE wrestler Just Joe (Joe E. Legend). The two were known as Sex and Violence, a phrase that is now on some of Edge’s t-shirt designs.

“I did steal it, but it was not copyrighted then.”

Edge back then was known as Sexton Hardcastle. He formed friendships with future superstars Rhino, Christian Cage and the Headbangers, to name a few. He was wrestling in front of 100 people for Insane Championship Wrestling, a Detroit-based promotion.

Edge’s partner, Joe E. Legend told SLAM! Wrestling in 2005 how Edge was the “Sex” in the team. “With a skull like this, I couldn’t be Sex,” Legend said.

“I hope that a lot of Canadian fans will be able to make it,” Edge said about Detroit’s close access from Canada. “But it will be my job for all of them that come to hate me.”

When an estimated 78,000 expected to see Edge at Wrestlemania, few will know that just 10 years earlier, in the same town, he was wrestling in front of a fraction of that. Edge did not hold back, despite the size of the crowd.

“A lot of my more brutal matches were here in Detroit,” he said. Blood and sweat were what made up ICW. They were Detroit’s answer to ECW, an organization that was not touring near Detroit at the time.

Detroit has always been a town of more brutal wrestlers and matches. The Original Sheik (Ed Farhat) made his mark in Detroit while his nephew Sabu is labeled the “most suicidal, homicidal, genocidal, death-defying athlete on the face of the planet” by Paul Heyman, former ECW owner.

Edge will know he succeeded when Wrestlemania 23 comes around. No one else he trained with, no one else that he wrestled with in Detroit will be in the ring that day but him.

And who would Edge like to face? “I am undefeated at Wrestlemania, and I can think of one other wrestler that is.”

Edge is talking about The Undertaker. The two men have never been defeated in a Wrestlemania encounter, but they also have never fought each other. If they were to fight, something would have to budge.