ROH Milestone Series: This is awesome

The chant of “This is awesome” has recently become the at times clichéd chant to use by audiences. In the case of ROH’s Milestone Series however, the chant is apt. Hearkening back to the NWA Great American Bash tour, ROH this spring put together a series of shows that not only is some of the best work they have ever done, but is the best consecutive series of wrestling shows in a long time. 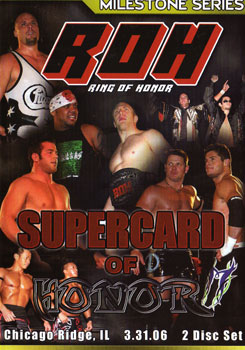 The series starts with the company’s Fourth Anniversary Show on February 25th in Edison, New Jersey. The show is a sign of things to come, marking the return of Jay and Mark Briscoe to ROH, a brutal ghetto fight between Colt Cabana and Homicide, a great Bryan Danielson vs. Jimmy Rave match and is capped off with a tag title match that has Generation Next’s Austin Aries and Roderick Strong defending against their GenNext teammate Matt Sydal and AJ Styles. From top to bottom this show is a fitting celebration of the company’s arrival at the four-year mark.

Up next is Arena Warfare, from March 11th, coming from where else but the ECW Arena in Philadelphia. This was the company’s debut in the historic building and unfortunately it doesn’t have the big show feel that an event of this magnitude should have. It’s certainly an entertaining show, but is just lacking something. It could be just that I saw so much great wrestling in this series that took away from it. The show-ending brawl between the ROH locker room and rival Combat Zone Wrestling however is incredibly intense. My only complaint is that as someone who doesn’t follow CZW regularly I only knew a handful of those involved in the assault — namely Super Dragon and Sonjay Dutt from their work in other promotions, and John Zandig because he announced himself. Some more clarity into what the casual fan was seeing would have been appreciated.

That would pretty much be the last of my criticism of any of the shows. The promotion’s New York City return on March 25th, dubbed Best in the World, is headlined by Pro Wrestling Noah stars KENTA and Naomichi Marufuji against ROH Champion Bryan Danielson & Samoa Joe, who all prove why the show was named that. It is a hard-hitting blend of old school, Japanese and new wrestling and it works perfectly. The semi-main event of The Briscoe Brothers vs. Roderick Strong and Jack Evans is a dream match that was nearly two years in the making. As Strong and Evans have gelled as a team ROH fans wanted to see the Briscoes return to show what these two could do, and boy do they deliver.

Up next is Ring of Honor’s first Triple-shot — three shows Wrestlemania weekend. The first is in Detroit for March 30th’s Dragon Gate Challenge, named for appearances of stars from the Japanese promotion, who would appear an all three shows. Much like the stars of Michinoku Pro in ECW nearly a decade ago, they certainly are show stealers. Dragon Kid & Genki Horiguchi vs. AJ Styles and Matt Sydal and Blood Generation vs. Generation Next are off the charts with fast-paced moves and innovation that was a teaser for what would happen the next night. BJ Whitmer and Jimmy Jacobs have a great match that is marred by a truly scary moment in which Whitmer tries to powerbomb Jacobs off the top, slips and they both crash to the floor. How they continued the match is beyond me. Samoa Joe and Christopher Daniels have a grudge match to headline the show which, if you have seen their bouts in TNA you will not want to miss.

Supercard of Honor is a double-disc set from April 1st in Chicago. Out of the ten matches on the card, the show stealer is the six-man tag between Do Fixer (Dragon Kid, Genki Horigucho and Ryo Saito) and Blood Generation (CIMA, Naruki Doi, & Masato Yoshino.) The match had the crowd chanting “Please don’t stop” and made SLAM! Wrestling editor Greg Oliver, in attendance, remember why he loves wrestling. Even without the live atmosphere the match lives up to the hype. I took this DVD to my friend Scott’s house and all he could keep saying was “Oh my god.” On what is overall an excellent show, this match of the year candidate truly stands out. Despite being worn out from the six man, there are also matches like AJ Styles & Matt Sydal vs. Austin Aries and Jack Evans which almost steals match of the night from the six-man, and a brutal and hard fought main event between ROH Champ Bryan Danielson and Roderick Strong. I still cringe just thinking about Strong’s chops.

While people rave about Supercard of Honor, and rightfully so, as an overall event the next night’s Better Than Our Best surpasses it. The opening Six-Man Mayhem featuring Ace Steel, Jack Evans, Matt Sydal, Jimmy Jacobs and Jake and Dave Crist is a great way to kick off the show. Jimmy Rave, Alex Shelley & Masato Yoshino vs. Do Fixer and Strong & Aries vs. Blood Generation continue the trend of amazing matches featuring the Dragon Gate talent. Just looking at the participants in the Four Corner Survival should tell you what you need to know — AJ Styles vs. Samoa Joe vs. Christopher Daniels vs. Jimmy Yang. Lance Storm proves he can still go by coming out of retirement to challenge Bryan Danielson and the show caps off with a fun, sick and violent Chicago Street Fight between Homicide and Colt Cabana that ends their lengthy feud.

The milestone series ends with a milestone — The 100th Show in Philadelphia on April 22nd. Chris Daniels and Claudio Castagnoli have a great opener, the tag title match with Aries & Strong against Homicide and Ricky Reyes is typical of both teams work and Bryan Danielson vs. Delirious is highly entertaining. Watching Jay and Mark Briscoe take on Matt Sydal and AJ Styles made me remember the first ROH matches I ever saw, with Styles teaming with the Amazing Red to take on the Briscoes. It was those matches that first made me interested in ROH, and while it is Matt Sydal now the match is just as good as what I remembered. The show’s finale is an all out interpromotional brawl between ROH’s Samoa Joe, Adam Pearce and BJ Whitmer and CZW’s Chris Hero, Super Dragon and Necro Butcher.

What stands out to me, aside from the match quality on the shows, is the number of intricate feuds that continue or conclude within the series in addition to one-off matches. The story of Christopher Daniels trying to get his first ROH pinfall victory over Samoa Joe, the tension of Matt Sydal targeting his own stablemates for the tag titles, the determination of Roderick Strong to achieve his dream of the ROH title, the brutality of Cabana vs. Homicide and the build between the war of ROH vs. CZW all unfold beautifully here. Some feuds end, some begin and leave you hungering for the next release so you can see more.

If watching widows disgrace the memory of their loved ones or seeing the owners of the company on your TV every week has you wondering why you watch wrestling anymore, you’d be well advised to order yourself the Ring of Honor Milestone Series. While best as a set, any of the shows, especially the Wrestlemania Weekend ones, will help you rediscover what it is that you love about professional wrestling.

You should get these shows simply because this is awesome.