Most university professors do not moonlight as pro-wrestling announcers. Then again, Sam Dubé is not your typical professor.

Dubé teaches Mathematics at Carleton University in Ottawa. When not in the classroom, he can be found at Legion halls and small-town arenas working as a ring announcer with independent promotion Rage Wrestling. 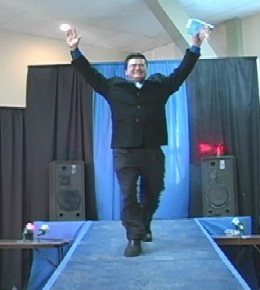 Speaking with Dubé, his knowledge and excitement for the sport is evident. “I remember watching Greg Gagne and Nick Bockwinkel wrestle at the Ottawa Civic Centre when I was nine. They put on an amazing match and I became hooked on wrestling,” he explained to SLAM! Wrestling. “As I grew older, I started to buy wrestling magazines and found out about other federations. My brother and I would spend hours dreaming up inter-federation title bouts.”

Dubé’s passion for wrestling also extended into other strength-based sports. He has a mixed-martial arts background and has trained and competed in Olympic-lifting and powerlifting competitions. Sam has also coached several top-level athletes for strongman competitions, including former World Strongman Champion, Hugo Girard.

Wrestling fans may recognize Dubé from his work on television. “I started announcing a few years ago for the competitions. I’ve been a part of over 40 Strongman shows across North America and have been on TSN for the Canadian Strength Athletic Series. One of my biggest thrills was announcing for a competition during a half-time intermission at a CFL game. There were over 35,000 screaming fans!”

Still, how does a university professor and strongman analyst end up becoming a pro-wrestling announcer? “I met and became friends with pro-wrestler, Dean Danis (Damian Styles) at the gym. Dean asked me if I would like to announce for an independent wrestling promotion he co-owned. I thought it was a great idea and things went from there.”

In an interesting coincidence, Rage Wrestling performer Farzad Mirza (“Prince of Persia” Rahim Ali) is a former student of Dubé’s. “I remember Sam from my first year of Engineering. He was one of my favorite professors,” Mirza said. “When you would go to his office, he would have photos from various strongman competitions!”

Dubé does an excellent job of announcing but he may still harbor dreams of stepping into the ring : “I’m 36 and if I was a few years younger I would be in the ring with the wrestlers. I have great respect for what they do as athletes. I have not been written into the storyline yet but we will see what happens in the future.”