Although it seems like a world away, there was once a time when female wrestlers were judged on their skill and toughness, rather than on their silicone-inflated assets. Back when a being a “diva” meant you were an opera singer, women wrestlers were not only well-versed in their mat craft, but they could take and dish out the knocks with many of their male counterparts.

Respecting that tradition of toughness over torso is England’s Pippa L’Vinn, now a nine-year veteran of the wrestling arena. Unsurprisingly, given her no-nonsense reputation, she took to combat sports rather quickly. 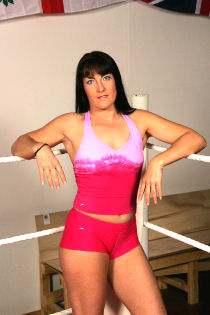 “I started off doing tae kwan do when I was 16,” she told SLAM! Wrestling, “but since a friend of mine was interested in judo, I went with her, and found that judo suited me better. I went as far as to become a green belt, but then had a break of a few years before I fell into wrestling.”

As her words imply, even by her early twenties, the 5-foot-4 inches tall, 10-stone (140-pound) L’Vinn had no desire to be involved in the wrestling business. In fact, her grappling endeavours were more down to the fact that she hated working out in gyms.

“I have never been one for going to the gym. I always want to have some sort of competitive element, some sort of challenge for myself. You just don’t get that in a gym. But still, I was never a fan of wrestling, even though it was so popular here. I can remember when wrestling came to Manchester, with Marc Rocco, but I knew nothing about the wrestling scene.”

When she did eventually begin to take an interest in the sport, however, it was not initially the professional wrestling game that caught her imagination. Instead, real submission wrestling was where she cut her in-ring teeth.

“I did real submission wrestling for around three years, before I started watching a few pro wrestling tapes. I found the concept of pro wrestling very interesting, especially the idea of how different it was from submission style, yet a lot of the moves were interchangeable between submission and pro. I saw people like Leilani Kai, and I knew that I was capable of doing pro wrestling. From there, the challenge of becoming a better pro wrestler has got me where I am today.”

Where she is today is just about everywhere. Champion of Randy Powell’s Professional Girls Wrestling Association from 2002-2005, L’Vinn has also worked in Germany, France, Belgium and Ireland, as well as in her home country. But despite her hopes of reclaiming the PGWA title from Nikki Roxx, her own career is not always at the forefront of her mind. Instead, her attention is often focused on what she can do to improve women’s wrestling as a whole. In fact, in 2005 L’Vinn leased her own wrestling facility in Manchester, England, in order to promote the sport that she loves.

“I got this place about a year ago. I’ve got a 14-foot ring in there, shower-room facilities. A lot of the girls come down here to train. It’s not a specific training regimen, it’s more about getting the girls together and having a base to put on shows. This year has been difficult because we’ve done a major re-fit of the place, and I’ve spent a lot of money. It’s a financial commitment, but I hope that at some point it will really benefit some of the girls. I’d like to be able to look back at some point, and say that I made a difference. I’ve put my money where my mouth is, and I hope it works out.”

Aside from the obvious altruism, L’Vinn pointed out that the more accomplished female wrestlers that are available to work with, the further she — and the sport — can move forward.

“There are a core of girls who are interested in this for the right reasons — nice girls who are also good workers. The thing is that the more girls that we can bring to this, the more chance of getting work ourselves, as we’ll have quality opponents to work with. In the business it is called ‘blocking,’ where you don’t put another girl forward in case it jeopardizes your own position. But that practice is senseless, because the more good girls we have, the more matches we get to have.”

The subject of high-quality workers is a touchy one for L’Vinn, and so many of the women who have dedicated their time to in-ring wrestling. Ask a typical wrestling fan to name a female wrestler, and whilst you might get a “Trish Stratus,” you’re just as likely to hear “Torrie Wilson.” L’Vinn is unrepentant about the standard of the WWE’s Women’s division.

“The divas wrestling is utter crap,” she said disdainfully, “and I think the T&A factor in wrestling is very sad. I know a few guys that have been on shows with Molly Holly, and say she is a good worker. It’s just a shame when there are girls in the ring who are more classed as models than anything else — with the big boobs and the short skirts — who are going to get jobs more quickly than someone like myself, who doesn’t quite have all that. But as long as people think that I’m a good worker, and a good person, that means more to me than looking like a model.”

Despite all that, L’Vinn wanted to make it clear to SLAM! Wrestling that it was not the divas that she blamed, but the WWE themselves.

“It’s not the fault of the girls, because they can often work, but it’s a case of doing what they are told, be it what storyline to portray or what to wear in the ring. They aren’t allowed to show their wrestling talent. Let’s be honest, if you are going to see women’s wrestling, you don’t want to see two horrible-looking ones, but there should be a place for everyone. Look at (famed British female wrestler) Klondike Kate, she’s no great beauty, but when you see her in the ring, she can get heat and she has charisma. In the WWE, they’ll have a top ten list of things that they look for, and I bet wrestling ability isn’t even in that top ten.”

With the crowd reactions to the WWE Diva Search and “pillow fight” (see this year’s WrestleMania) matches at new lows, the WWE could do with re-considering how it wishes its women to be portrayed.

Watching some tapes of L’Vinn would be a start.