Though many of the big names in TNA Wrestling were well-recognized from their pre-TNA careers, the company has also done well in taking lesser-known wrestlers and turning them into household names. One of those breakout talents is the “Alpha Male” Monty Brown, who recently sat down with SLAM! Wrestling to discuss his career in the company so far, and his plans for the future.

Before he became one of TNA’s marquee names, Brown played in the NFL, even playing in two Super Bowl games. But even as he was making his name on the gridiron, he knew his path would eventually lead him to the squared circle. 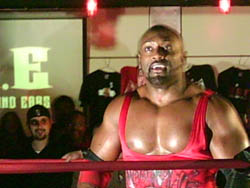 Monty Brown this past weekend at the Blood, Sweat, and Ears show in Mississauga. Photo by Bob Kapur

While some may consider that last point to be a boastful claim, it serves to highlight Brown’s complete confidence in his abilities to become just as big a star in wrestling as he was in the NFL, if not bigger. Given his size, his athleticism, and his charismatic personality, this level of confidence seems reasonably placed.

But first, he’ll have to get past the popular Christian Cage at this weekend’s Pay-Per-View show, Turning Point, in a Number One Contender’s match. This will be Cage’s first PPV match for the company, and Brown is glad to be the man on the other side of the ring.

“I’m looking forward to (working with Christian) a lot. I think, as you saw the other day on Impact, that we have really good chemistry together. Christian’s a heck of a worker, it’s going to be a big challenge for me to get in there with a guy of his caliber.”

As both men are excellent promo guys as well (though, admittedly, Brown’s allusions to life on the Serengeti and his occasional bizarre tangents are an acquired taste), so if this feud goes on after Turning Point, fans can expect to be treated to an excellent war of words as well. While Brown doesn’t know if the two will work a long-term program, he would definitely look forward to the opportunity.

It appears that fans are enjoying the interplay between the two as well. And even though Brown is currently playing a heel role right now, that hasn’t stopped him from receiving his fair share of support.

Brown credits a lot of his popularity to the way he interacts with the fans, either during a promo, or even during the match. Frequently, Monty will exchange retorts with the crowd in the middle of delivering a beat-down to his opponent.

“If a fan wants to heel on me, they’d better be careful,” warned Brown, “because I’ll come right back on them with something quick. I really enjoy that mental jousting with the live crowd. When I do that and get a good reaction, it really makes me appreciate more the business that I’ve chosen. And hopefully the fans can go home (thinking that) the Alpha Male was really entertaining.”

In order to remain entertaining, Brown is a keen student of modern culture, and will try to work in popular slang and pop references into his interview segments, in order to grab and keep the attention of the younger fans, the demographic that TNA is trying to capture. To that end, he enjoys working the occasional independent show, as it gives him a chance to try out new material to see what works, which he can then take back for the TNA television audience.

“I love the indy scene. If a promoter wants to bring in the Alpha Male, and we can make a deal, preferably for multiple dates, then I don’t have a problem doing it. I really like using the indy scene as a sounding board for new things that I want to do, new moves that I want to use. On TV, you don’t get a lot of interaction with the crowd, so independents help me keep sharp. I will do anything I can to make sure that the fans get their money’s worth, and go home entertained.”

It’s that kind of mentality that Brown feels will take him to the top of the game, and keep him there.

“Looking at short-term goals and looking at long-term goals … they’re really one and the same for me: I want to be the best that I can in this business. I really think that if I’m given the opportunity and I’m blessed with good health, that there’s no limit to where the Alpha Male can go. I entertain at a different level than the average wrestler, I think. And the fans realize that.”