To be able to leave on your own terms is something that few people get to do in pro wrestling anymore. The days of picking up for a new territory with the blessing of the promoter are long gone. But then there’s Christian. 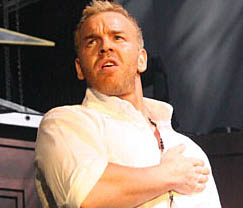 The Orangeville, Ontario native decided in October to turn down a guaranteed contract from his employer of eight years, the WWE. Instead, Christian (Jay Reso) signed with the relatively young TNA promotion, where he returned to his (very) old moniker of Christian Cage. He explained to SLAM! Wrestling how he came to that tough decision.

“Something needs to be said for leaving on your own terms, and doing things the way you want to do them. Fortunately, I had that opportunity, and I wanted to take it,” he said. “I would say, seriously considering it, probably the last three, four months of my contract.”

It was totally his decision, made on his own. “I never told anybody what I was thinking or how I was feeling. It was something that I wanted to look within myself and make the decision on my own. To me, it felt like at the time, this is a life-changing decision right here,” he said, explaining that he didn’t want to ruin a friendship by finger-pointing if things didn’t work out. “I didn’t really ask for advice or anything from anybody.”

That said, however, Christian admitted that he’d heard the good word from a few old co-workers, including half of the Dudley Boys/Team 3-D. “Bubba [Dudley] is a good friend of mine, and we talk regularly on the phone. He had mentioned, or work was brought up, or whatever. He would tell me that he was having a great time there, and that he enjoyed it and was having fun. It reminded him of his ECW days, and stuff like that. We were just talking. … I don’t think he knew until the day; I don’t think a lot of people knew. I had a lot of messages on my answering machine.”

Over the last year in WWE, his Christian character had really started to “roll” as a singles wrestler. While on Monday Night Raw, he started to really shine on his own on the microphone, creating the Captain Charisma persona and memorable terms like his “peeps.” (“The peeps thing was something that I said off the cuff. Those usually seem to be the ones that work out best.”) Many saw his transfer to the Smackdown program as a chance for him to move further up the card, competing in main events. It just didn’t happen, and he ended up mired with an all-too-familiar feud with Booker T — if he was used at all.

“I’m not bitter or anything towards my time in WWE, or anything like that. I had eight great years there,” he said. “I was a little creatively frustrated at the end there. But for the bulk of my time there, it wasn’t like that. I have no ill will or bitterness towards the company at all. They gave me a great life and allowed me to live my dreams. I can’t complain in that respect. It was just time for me, personally and professionally, to move on and try some other things in life.”

He’s enjoying life off the road, and the commute to the TNA shows in Orlando is only an hour-and-a-half drive for the Florida resident.

The independent promoters have been calling, but he’s been turning them down — at least for now. “I’ve had offers, and a lot of things like that. One of the factors of me leaving was the schedule, and the travel. I’ve been on the road for eight years straight, 250-plus days a year. It starts to take a toll on you mentally and physically. It was just one of those things where I felt like I was coming home to do laundry and pay some bills, then leave again. At this time, I’d just really like to focus on TNA, and do the best I can there. Maybe, eventually, branch out and do some other things if the opportunity comes up. But for right now, I think I’m kind of just enjoying letting body heal and relaxing, and getting my head clear; kind of just enjoying life a little bit.”

Japan is an option for him as well. “I would love to go and do a show three times a year, but I don’t think I’d want to go over there and tour for any amount of time. I’ve always loved Japan and the fans are great. I love travelling, and it’s one of my favorite places to go. I definitely wouldn’t rule it out, but not in the immediate future.”

This Thursday on the TNA primetime special on Spike TV (10 p.m. ET), Christian Cage sees action in TNA’s six-sided ring for the first time, battling Bobby Roode. Then on Sunday, at the Turning Point pay-per-view, he takes on Monty Brown.

“It’s fun when you have a guy like Monty who’s a real up-and-comer. He’s got a lot of personality. He’s a great talker also,” said Cage. “So it’s nice to be able to go out and verbally joust with somebody. … I think we had some good chemistry when we were in the ring, and when we squared off on the microphone. We got a lot of good feedback from it, so hopefully we can get to do that a little bit more.”

The joy that Christian Cage is feeling delivering his TNA promos is quite apparent even to someone unfamiliar with his past. Unlike the WWE, where much was scripted, in TNA he is given a couple of bullet points to hit during the promo and off he goes.

The joy is there when he gets in the ring, too, feeding off the energy of the other competitors in the up-and-coming promotion. “I’ve wrestled for so long that it’s second nature, really. It’s like riding a bike, ” he said. “It’s great getting in there, seeing the guys there, the excitement they have and the feeling that something really special is going on. It’s lit a new fire under me and making me want to reach down and pull some new tricks out of the bag, and really step up my game in the ring also. It’s a lot of fun.”

But, there’s a little bit of the past for Christian in TNA as well. There’s a few old co-workers like Jeff Jarrett, the Dudleys, Rhino, BG James, Kip James and Raven. But there’s also Scott D’Amore, who pre-dates all of them.

“Scott and I actually shared an apartment in Moncton, New Brunswick for a month in 1996 or 1997, I can’t really remember,” Christian said. “It’s funny the way things work out. Now he’s one of the main guys in TNA.”

Then there’s the return to the name that he used in his very first match.He was scheduled to team with Keith Assoun, a fellow Sweet Daddy Siki and Ron Hutchison trainee, who would become Zakk Wylde. “We were going to team together, so we were trying to think of names that would sound cool. Nicholas Cage has always been one of my favorite actors, and I always thought his last name was cool, Cage was cool as a last name. I was thinking about using that.” Then an entertainment program came on, and a segment aired on Christian Slater. “I caught it out of the corner of my eye, looked back, and said, ‘What about Christian Cage?’ He said, ‘Yeah, that’ll work I guess for now.’ I used it and it stuck.”