ORLANDO, FL – Take a look at TNA’s Monty Brown and you will see what most people see: a professional wrestler with a chiseled physique.

But look into his eyes and you will see what many an opposing offensive lineman has stared at on the football field: a focused competitor, who once he has his sights on a goal, chases it with a ferocious hunger. 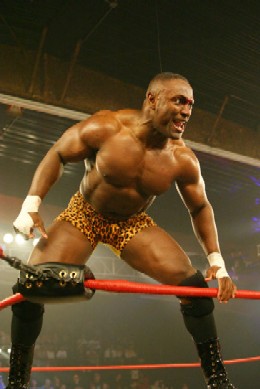 “As far as intensity goes, it’s one in the same,” said The Alpha Male in an exclusive interview with SLAM! Wrestling. “That craziness, that determination, that psycho linebacker — people who know me will tell you that’s his nature. That’s what he does, that’s who he is. Anything I do, regardless of the situation, you put me in that type of environment and I’m going to perform.”

The drive to over achieve is automatic for Montaque N. Brown, a native of Bridgeport, Michigan. He achieved All American status as a middle linebacker playing for Ferris State University from 1989-92, setting school records in total tackles, unassisted tackles, interceptions and fumble recoveries. Other distinctions would follow for his on-field performances, not to mention posting impressive scholastic points in the classroom — a 3.6 GPA in management.

But he was never too busy to miss out on watching wrestling.

From there, it was on to the National Football League (NFL), signed by the Buffalo Bills as a rookie free agent on May 6, 1993. In his rookie season, Brown was the only newcomer to crack the defending AFC champions’ lineup, and made it all the way to the Super Bowl. Brown returned to the Super Bowl in 1996 playing for the New England Patriots. He would retire from the league in 1997 due to an injury.

To endure the battlefields of professional football is to push one’s self beyond the human limits of pain and exhaustion. It is that will which Brown relies on to get where he is now, ever focused on his next goal in life.

“I challenge myself and I’m goal-oriented person. There were goals that I had in football, but then I still had goals to achieve in professional wrestling,” he said.

His entrance into professional wrestling is in keeping with many former gridiron greats who made the transition from shoulder pads and cleats, to trunks and boots. Be assured, pursuing his newfound vocation is done with the purest of intentions.

“This wasn’t something I had to get into, this is something I wanted to get into,” Brown said. “I wanted to get into this since I was a little kid. Professional wrestling has always been a part of my life. Once I got to a certain point where I am moving from loving the sport from the outside to moving to the inside, when my opportunity came, I jumped on it and TNA has provided that.” 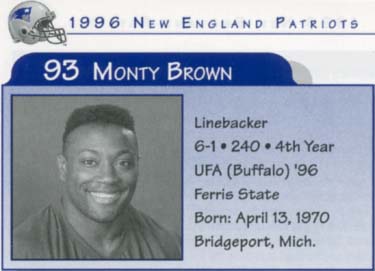 His first step into the grappling world was taken when he began training under the tutelage of famed mixed martial artist and pro wrestler, Dan Severn, a former NWA World champion. “Dan can twist you up into knots,” laughed Brown when reminiscing on his time with his fellow Michigan native.

“He’s a really good guy, good human being. It’s rare to find a guy with that kind of collegiate athletic background, UFC (Ultimate Fighting Championship) and everything else, but to also be as personable and nice as he is. He taught me so much about the wrestling game in general.”

In keeping with his pursuit of excellence, Brown took full advantage of his time with Severn, constantly seeking out advice when it came to all matters related to wrestling. “When I trained with him, I would push Dan to a point where I would be asking him all the time ‘Hey Dan, what about this take down, how about this and what about this?’ He had a guy who was my size who could go out there and tussle around with and we would get some things done.”

Making his pro debut in 2000, Brown would put his training to the test, paying his dues in the Michigan independent scene. Perhaps the most important trait he has developed since that time is his continuing vigilance towards studying and implementing wrestling knowledge whenever he can, rigors in tow.

Ever present in his mind are the images of wrestling from his childhood, where the bigger than life wrestling stars such as Ric Flair, Dusty Rhodes and Shane Douglas have imprinted their mystique and influence on Brown.

“Now, when I look back with the knowledge I have now, unbelievable talent,” he said. “Unbelievable the way these guys would move the crowds back then and the psychology these guys had.”

Now rooted with TNA, Brown finds himself being identified as a distinct entity to the promotion, standing out from many of his cohorts who established themselves with either WWE or the now defunct WCW. If there is pressure to that uniqueness, Brown is more than happy to take the ball and run with it.

“As far as pressure goes, I’ve played at Rich Stadium, I played at Foxboro, I’ve played football in front of 80,000 crazy fans right on the spot in pressure situations,” said Brown.

“If there’s pressure there, then I want it there. I want that pressure, put the whole promotion on my shoulders and give me the opportunity to run with it. I don’t believe my talent has been fully tapped yet. This is just something that is getting started with me. My drive, my ability, my personality, my charisma – the surface has barely been scratched yet. ”