So Hard Justice is in the bag and TNA has a new NWA heavyweight champion in the Phenomenal A.J. Styles! I am so happy for A.J. as this has truly been a magical month for him, what with becoming both champion and a new daddy! It really couldn’t happen to a nicer guy.

A.J. is one of those rare people who gets along with everyone. You would be hard-pressed to find someone who dislikes or doesn’t get along with A.J. And in a business filled with HUGE egos and chips on shoulders that is a truly “phenomenal” thing. 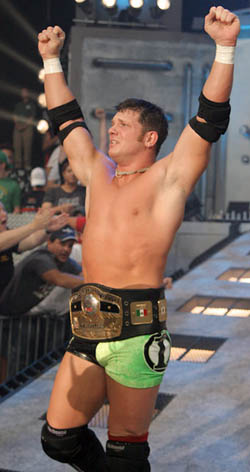 A lot of people are debating the merits and demerits of A.J. as champion; not me — I think it’s great! A.J. has an athleticism that obviously cannot be denied, but has some hidden strengths that some people don’t see as obvious “marketable” traits:

Size. I think his size is a plus, and not only because I’m also short! It makes every title defense mean a little more when you are rooting for the “little” guy or the underdog.

I want to wish A.J. a long and successful title reign and hope he appreciates every minute of it. At least until Bobby Roode gets his hands on him! Heh, heh.

Speaking of Bobby, was it just me or was Team Canada a well-oiled machine on Sunday? Yes, ultimately they lost the Gauntlet, but that’s only because they were missing a Devine cog in the machine ;)! But they were really together as a unit. And how about the crowd’s reaction to Lance Hoyt!! Somebody is popular! They really love him in Orlando. And talk about love, the crowd’s love for both the Naturals and Chris Candido (R.I.P.) was really touching. We all miss Chris, and Sunday showed the love he garnered greatly. Andy and Chase did a great job paying tribute to their mentor and deserve the adulation they received from the crowd? I wonder if people cheering the Naturals will become a regular thing?

All in all, I really liked Hard Justice, and thought it was a very good PPV with some great innovative stuff (Shocker’s handspring from the dive), good fun matches (Raven/Sean Waltman was great!), and the mixed tag (way to go Boom Boom). Wish I could have been there too, but it shouldn’t be too long now.

One of the things I hate most about being injured is watching guys go out and have great matches and knowing you can’t do the same. One of the other big pet peeves is missing hanging out with your friends after the shows. It had never been more apparent to me than this last weekend. After the PPVs, the boys will sometimes go out and get something to eat and maybe a drink and there is always a good story the next day. I really miss those stories and, more importantly, just the hanging out. Don’t get me wrong — there are some great guys in Windsor, but it’s not the same.

On the WWE Raw front, it seems that art again reflects life with the Kane/Lita/Edge angle. I think it’s a great idea personally, as it capitalizes on already existing heat and makes bigger bad guys of Edge and Lita in the process. As well it gives Kane a great revenge angle and something to concentrate on. Batista has done an admirable job as champion so far. He really has grown on me. I hope they give him some time with the belt to establish him, as Hunter really doesn’t need it again for a while in my opinion. He’s already thought of as one of the best. As well I think it’s about time they gave Hurricane and Rosey a big push. That gimmick is GREAT!!! And there’s so much you could do with it.

On Smackdown, the focus has been firmly on Eddie Guerrero and Rey Mysterio — as well it should be — as they are going to have one of the best feuds ever. I think it will definitely be an all-time classic. These are two of the best workers of our generation and can draw fans into an emotional feud with ease. This should be nothing short of spectacular.

I was talking to a friend the other day and we both agreed that we love the MNM gimmick and I personally couldn’t be happier for Joey Matthews, erm, I mean Mercury. They have been handled well thus far and, if it continues this way, they will be a dominant tag team. For some reason they remind me of the Midnight Express. Not sure why yet. Melina certainly doesn’t look like Jim Cornette! I am really liking Carlito in the Cabana too. Great way to use an injured guy and give him more character. Cough, cough, nudge.

Lately I have been helping out at Scott D’Amore’s CanAm wrestling school here in Windsor, and I must say there are some really promising young guys in the class. Matt Duval, a world-renowned body builder, is one of those students. The guy is, I believe, 6’1″ and weighs 280 pounds of rock-solid muscle and is one of the nicest human beings I have ever met. Look for him to make a big impact (no pun intended). As well there are some smaller guys in El Reverso and Brad Martin who are really exceptional and could go far. If you live in the area of southern Ontario/Michigan, I would really try to check these guys out on the various indies they do, as well on Border City Wrestling shows. It’s definitely worth the visit.

Well enough for this week, kiddies. Sorry for the delay between columns; I have been lazy. No other excuses. Just lazy. I will try harder. Go to the indies in your area. They need the business, ’cause without you there is no wrestling business.