Paul Lynch’s 1978 flick Blood & Guts used a tag line “Winning is the best revenge.” It might as well have used “A snapshot of the Hamilton wrestling scene.”

Hamilton, Ontario is so intertwined in Blood & Guts that it’s comical. Look, there’s the mayor of Stoney Creek as a referee! 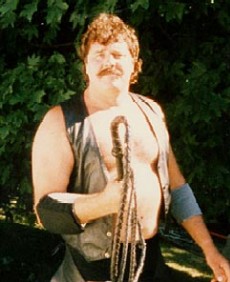 Much of the film is set in the gym owned by Hamilton mainstay Bull Johnson, and his sons Randy and Danny.

“It wasn’t an … award-winning movie,” recalled the late “Bullwhip” Danny Johnson in 2001. “You know what the best is? We got everybody involved that we knew. All the wrestlers, all the guys from around town we got involved. We got friends involved as extras. We had friends of ours involved in fight scenes in bars!”

“It was perfect, because we figured this might be a one-time thing, so we grabbed everybody we could, just to make Hamilton, just to put it on the map,” said Johnson, who towered over most of the people on set with his 6-foot-5, 285-pound bulk.

Reggie Love (Johnny Evans) was one of those local guys. He was working out in Bull’s gym, punching the heavy bag when he was asked if he wanted to read for a part. Not only did he get the part, Reggie ended up as the choreographer for the fight scenes.

“You’re dealing with tough guys, not Rhodes scholars, most of them. They’d say, ‘Well, he’s going to hit him or something.’ I said, ‘We don’t talk like that.’ When they did the different fight scenes and things, I would choreograph. So my name’s in the credits as a choreographer,” explained Love.

“They more or less didn’t know what to do,” Johnson said of the wrestling scenes. “They just left everything in our hands. They just said, ‘Whatever you guys want to do with this.'”

The Love Brother just laughs at how low-budget it was. Whereas a major motion picture might do dozens of takes of one scene, the big brawl at the end of Blood & Guts was filmed in just two hours. “We handled it pretty well for a cheap outfit. It came out pretty good.” 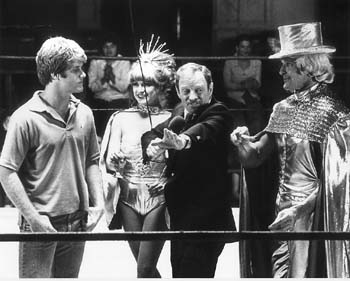 Blood & Guts stars William Smith (Rich Man, Poor Man) as the veteran wrestler, Danny O’Neil, who is challenged by the young up-and-comer Jim Davenport (played by Brian Clarke). Micheline Lanctot (The Apprenticeship of Duddy Kravitz) is Lucky Brown, the girl who gets between them, and seasoned actor Henry Beckman gets the best of his role as the trainer, Red Henkel. In fact, Beckman was nominated for a Canadian film award as best supporting actor.

Director Paul Lynch would go on to much better things, such as Prom Night and countless TV series, like Star Trek: The Next Generation and Deep Space Nine, Due South, and Xena: Warrior Princess. He told the Toronto Star that he was intrigued by the people in the screenplay by Joseph McBride, William Gray and John Hunter.

“Wrestling was just the background,” he told writer Sid Adilman. “I just liked the characters in it. They manage to hold their lives together somehow. They refuse to give up. Professional wrestling is dying but these people won’t quit. When they’re faced with the odds against wrestling, they just try to survive. I don’t call them losers. I call them heroes.”