Tell “Kowboy” Mike Hughes he can’t do something and he’ll work to whatever ends to prove you wrong.

“I’ve always been the type where someone says you can’t do this or you’ll never do that, I’ll stick it in your face and I’ll win. I mean it,” he says with conviction. 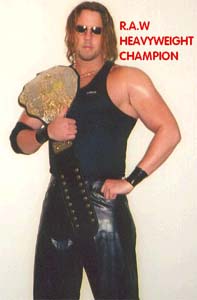 Kowboy Hughes with the R.A.W. championship.

Up to this point, the “Kowboy” has indeed been on the winning side of the wrestling equation. He is a former R.A.W heavyweight champion and a member of the “Kardinal Sinners”, a coalition of the most hated heels in the promotion including “The Natural” Bobby Rude, Kingman, and most recently the 7’2″, 370 lbs. Acadian Giant (formerly Kurrgan in the WWF). His hard work and perseverance has been one of the principal forces behind the emergence of Real Action Wrestling as a force in the Maritime territory. “He’s tireless,” said R.A.W promoter Warren Olsen, adding that Hughes has an “incredible work ethic” as well.

It was Hughes, with businessman and close friend Skot Gallant, who started Real Action Wrestling in 1999. “I just got home from touring with Grand Prix Wrestling in the summer. They were done for the year and I was getting set to go to Puerto Rico to work the winter months. I had gotten together with Skot and he said to me how we never get to see each other anymore. I was like, ‘Well I have to work, right?’ And he just said, ‘Well, how about we start up our own promotion and we’ll work the winter months so that you can stay here.’ I thought it would be great. I could stay sharp through the winter and be close to my family.”

When Grand Prix promoter Emile Dupre became aware of the pair’s plans, he assumed the worst. “Emile thought we were out to put him out of business. He ended up blacklisting me from his promotion and told me I’d never work in the territory again and that I was through. So that was it.” In 2000, the promotion was sold to Warren Olsen and Hughes stayed to work towards getting the promotion off the ground. Today he is proud of what R.A.W has accomplished.

“We’re the only organization that runs full-time, seven days a week and all year round. There’s no other promotion in Canada that’s doing that. In North America for full-time promotions, there’s the WWF, Ohio Valley Wrestling, and us, and I don’t think even OVW runs as many shows as we do. And we have an incredible roster of talent.”

Today R.A.W stands on the verge of a contract with local television station Eastlink Cable to do a once-a-week show and plans are underway for a major wrestling event in October. Hughes believes the sky’s the limit for what R.A.W can accomplish.

“I’d like to see us go national someday. I think we can definitely do it, and TV is key to doing that. What we need is a way to get people to come to our shows for the first time, because once they do, they’ll be hooked. If we can get people watching our show from their home to come out to the live events, then it will be a success.”

In speaking with Hughes, there’s no denying his passion for the wrestling business and for his relationship with the fans. “I like being right there, in the crowd. You see someone out there who’s directing all their energy towards you, you go right back and give it all back to them. When I walk to the ring, I pick out those people who are really into it and in my face and I’ll work off them, and it spreads through the crowd like a chain reaction.”

Originally from Prince Edward Island, the 6’5″, 260-pound Hughes began his career four years ago under the tutelage of Hubert Gallant and started out with Grand Prix Wrestling. He worked his first tour with legends like Leo Burke and The Beast and it was from these men that Hughes developed an old school methodology for approaching his game in the ring. 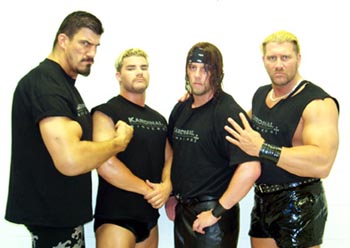 This approach intensified upon his transition to being a rulebreaker. “I’m a heel and I don’t want to be liked — at all! When I go to the ring I establish right off the bat that I’m a heel and there’s nothing about me that you should like. If there is something about me you do like, I’m going to change it so that you don’t like me. I’ve dumped Doritos over people’s heads and taken a guy’s box of donuts and tossed them at him. Whatever it takes.”

So where does the gimmick end and the real person begin? “Actually I don’t really have a gimmick. There isn’t a big difference between Mike Hughes and the ‘Kowboy’, it’s just an amplification. I think those are the best gimmicks, when you take your normal personality and amplify it as high as it can go.”

Although the 26-year-old Hughes is primarily focused on building up R.A.W, he does have an eye on the future, perhaps in the WWF. “I think about it and I’d love to, but I want more experience. I believe after a few more years I will be ready because I’ll have everything I need. I’ve been working on my size to my quickness and my mike skills.” He laughed and said, “It’s scary. I’ve become so comfortable with a mike in my hand, I don’t like doing an angle without it.”

When asked about the future of the industry, Hughes again betrays his old school leanings. “Myself, I would have preferred it to remain the way it was, when it was cut and dry and there was more kayfabe. But it’s done and you can’t fool the fans anymore. The people know that there’s storylines and so on. But they also realize too that we get hurt every night, we’re sore when we get up in the morning, and we’re giving our bodies up for them. And they appreciate that, so it’s fine with me.”

I have been watching and giving major heat to the Kowboy for quite some time now and I have to say he’s an all around money wrestler. This guy puts on a great show for us everytime we attend a RAW event. He is the heel you love to hate during a show and after meeting him (coyote ugly !) a few times he is truly a down to earth cool guy. I am happy to say that I just witnessed the first ever Real Action Wrestling TV taping and the Kowboy brought the belt back to “Sinner Land”
Biggest Raw Fan, Dan Curry

One thing you can say about Kowboy is he knows how to work the crowd. Whenever RAW comes to Charlottetown, we always have plenty of Kowboy signs on hand. We get right in his face and heckle him solid. He loves it and always rips our signs.
The Hardcore Icon

The Kowboy is an excellent wrestler and performer. I believe he is the stongest link for the R.A.W. roster. Although they have many great superstars, I have seen all the shows in Halifax and one in Stellerton. He is the kind of wrestler that you love to hate and he sells his gimmick very well. He pays attention to the crowd, telling us how filthy our hands are, and always coming back with a good comeback towards the fans. My memory is Kowboy going off the ropes. I yelled to do a leg drop. He stopped looked at me and said “I am going to to a leg drop” and he did!
I am glad the belt is in Sinner land again and I am looking forward to seeing Bobby Rude against Kowboy!! Sinner vs. Sinner. Now there is trouble in Sinner Land!!
Tim Spidel