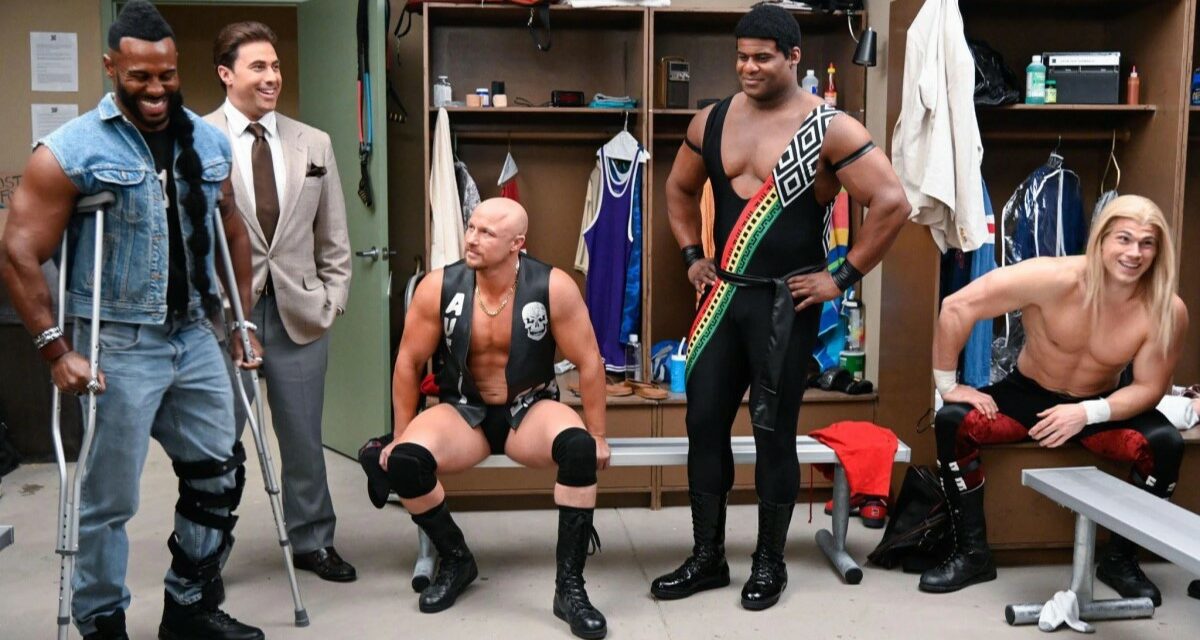 Tonight’s episode of Young Rock digs into the beginnings of the feud between The Rock and Triple H, but it’s the thinly-veiled knocks against an unnamed wrestler from the Attitude Era that will have most people playing a “Clue-like” game trying to figure out who Dwayne Johnson bore a big grudge against.

First, though, we start in 2023, with Johnson still trying to work his magic on Prime Minister Angela Honig of the fictional nation Gjelghiughm, attempting to secure a coffee trade deal with the United States. She tells him about her current political concern, which is that she’s trying to rename “Mount Cannibal”, a region so-named after a tragic incident involving a Gjelghiughm national football team (in a little nod to the 1993 Ethan Hawke vehicle Alive). It doesn’t take long, mind you, for Johnson to make it all about himself as he tells her about his troubles in navigating the political waters of the WWF locker room (I know, it’s his show).

So, we’re back in 1998 and The Rock (Uli Latukefu) is having a little trouble getting along (in storyline) with the rest of the Nation of Domination. In real life, though, he is running into some unexpected heat backstage for a few reasons — some his own fault, and some that confuse him. He is going long in segments, which is upsetting Vince McMahon and Pat Patterson, but he’s also finding himself at odds with Triple H for seemingly only doing business for himself.

During a call home to his family, he gets some advice from Rocky Johnson (Joseph Lee Anderson) who tells him the other wrestlers are always looking out for themselves, and will stab him in the back if it will help their own cause. Dwayne doesn’t believe that the locker room is the same as it was for his dad, though.

In yet another show-within-a-show moment in the series, lead writer of Young Rock, Brian Gewirtz, appears in this episode as he, of course, first met The Rock while writing for the WWF. Gewirtz is played by Clark Duke (Hot Tub Time Machine, TV’s The Office), and he seems to rub most of the wrestlers the wrong way as he has no wrestling experience — but The Rock is happy to hear out his ideas. Gewirtz and Johnson come up with a way to go after Triple H in a promo battle, but again it runs long (upsetting Vince) and Triple H found it to be too personal.

Still, The Rock is hot. He plays guitar. He develops catchphrases. He raises eyebrows. In short, he seems to be on the fast track to success, especially with one of the WWF’s top stars, Chad Frost, injured and out for an extended time. McMahon is looking for someone to step up, as Frost is a big loss.

Hold up – Chad Frost? Who is that? Standing to the far left in the top image above this article, you’ll see someone that Johnson admits in the episode is not a real person, but a stand-in for someone he won’t name. You see, Frost said friendly and encouraging things to The Rock’s face backstage, but was also burying him to Vince behind his back. At first, Dwayne thought it was Triple H trying to stunt his momentum, but The Game pleaded innocent.

So, hmm. Frost is a stand-in for someone who was hurt in 1998 after WrestleMania 14, and was one of the top stars of the WWF. Someone with Vince’s ear.

My Clue card says it was Shawn Michaels in Vince’s office with the backstage gossip.

The episode concludes with The Rock and Triple H (with Chyna at his side) going through their ladder match at SummerSlam 1998. Latukefu and Miles Burris (Triple H) certainly got their slow ladder climbing certificate, which added to the authenticity of their performance (on top of recorded commentary by Jim Ross and Jerry Lawler). Everything goes according to history, with the bonus bits being conversation between the wrestlers about how to end the match (which included going long again, which was again to the frustration of Pat Patterson).

This time, though, Vince wasn’t mad about the running time because he was thrilled with the match, which also allowed The Rock and Triple H to at least come to a professional peace.