SmackDown: Gunther faces The Monster of all Monsters in a Championship match 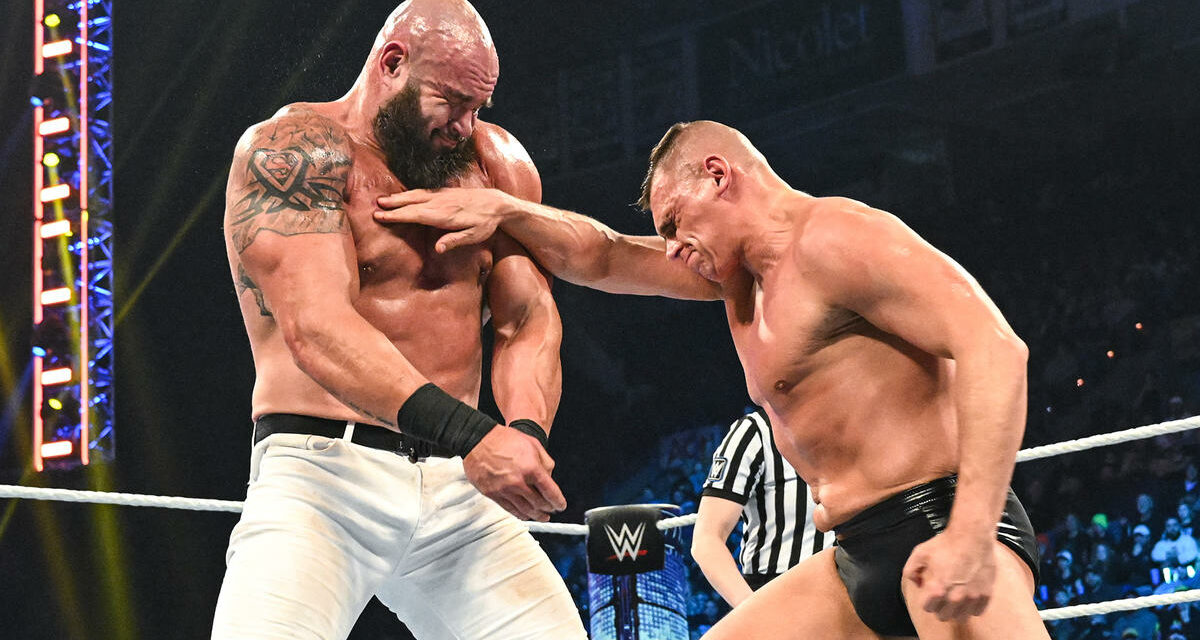 Who’s up for a fantastic evening?

Since Gunther was so keen to say that he’s beaten everyone who stood in his way, unfortunately for him and a delight for me, Braun Strowman is the next obstacle on the docket.

Strowman had this match under his control by striking fear and disability in Gunther that he started running outside of the ring. Braun follows and bulldozes the champ into the commentary table.

Strowman has Gunther on his shoulders about to slam him on the apron, but the General pushes him into the stairs. Gunther knows about the pain he caused to Strowman’s left shoulder that he twists and utilizes it to his advantage, he uses a knee slam to add further agony.

The Ring General inflicts chops to Strowman, so he could remain in his control. Braun looks to rally as he delivers a clothesline and a back body drop, he had the champion on his knees. Suddenly, Imperium gets involved while Gunther faked an injury, which drew the official’s attention away from the cheating happening behind her.

That wasn’t enough to keep Braun down because he sends a Monstrous Slam to the champ for a cover that didn’t award him the victory. He was so sure he won. Shame.

Strowman had Gunther’s ass in his face when he smacks the champion on his back. Ha! They later shared chops in the center of the ring.

Gunther was getting frustrated when Braun kicked out from a Drop Kick, a body splash and a wicked clothesline. It was an amazing effort on his part. So Gunther takes the edge on Braun’s bad shoulder on the top ropes to end up sending a Powerbomb to Strowman for a retaining win.

What will it take to rip that title off of The Ring General? Steal it, maybe? Ha!

Sami Zayn is backstage attempting to talk to the rest of The Bloodline, thinking they were here given they spoke earlier. Disturbingly, “Out of love,” according to Paul Heyman, Zayn should deal with Kevin Owens alone.

There’s something evil going on. And yes, I chose the word “evil” because it feels fitting. As soon as Sami leaves after using Heyman’s famous ideal, “It’s not a prediction, it’s a spoiler,” Paul’s face looked appalled and annoyed, as if Sami’s presence was an irritation to him. The Bloodline has the tendency to make grimaces once Zayn exits the vicinity. Mostly Roman Reigns, Heyman, and sometimes Jey.

As we move on from that eeriness, Rey Mysterio is here tonight. Yay! But also, yikes. He talks about his son, Dominik’s terrible decisions as of late, like getting his ass arrested. Luckily, what will help him get back on track will be to enter and win the upcoming Royal Rumble.

That’s all well and good, till Karrion Kross and Scarlett emerge from the pits of shadows. Karrion has been stalking Rey for weeks now, thinking he was extending a courtesy by offerings his assistance, which Rey rightly refused. And he does that again, so Kross puts him in the Krossjacket just to prove a point.

In the girls’ locker room, Raquel Rodriguez is ready for the Rumble and the possibility of winning. Liv Morgan challenges her by saying she got her palm read, lures Rodriguez in only to slap her silly. Rodriguez is tired that people forget that she’s the toughest and strongest wrestler here. I’m sure that Morgan didn’t give a damn, for she wanted to face Raquel in the ring regardless of the strength difference.

I don’t know if I feel insulted or bewildered about Li’s hairstyle. Their braids… something Black people such as myself are talented in producing. The style she chose doesn’t look bad on her, it looks great as a matter of fact, but I somewhat feel weird out by it. Like it was unnecessary.

Just a thought. Well, anyway… Xia came in completely deleting her former perspective as a wrestler. She initially wanted to be friends and play nice with everyone, formerly known as The Protector.

But that suddenly changed after she was revealed to be the hooded figure a few weeks ago during Nox and Morgan’s Women’s Tag Team match. She’s pissed that a lot of the new and returning brawlers seem to be getting more notice than she is, and she’s been here. One of those people, aside from Raquel Rodriguez and Emma, there’s Tegan.

She may have had a slight edit in her appearance, yet Xia collides with a couple of right hands and an uppercut from Tegan almost immediately at the start, breaking whatever spirit she did have.

Nox goes to climb the top rope, unfortunately, she takes way too long and gets hit by Xia’s punch and hair drag. Li continues with the upper hand by placing Tegan in a headlock so tight that she does it twice in the center of the mat.

Li still has control over this match with a belly-to-belly throw that pains Tegan to the point her face looks like she’s having a spasm. Xia prepared herself for a brutal takedown like a ninja, but Tegan dodges and delivers the Shiniest Wizard for a victorious blow.

When last week’s show ended, apparently, The Viking Raiders attacked Sheamus and Drew McIntyre after their loss against the Usos. They wanted to place the Celtic and Irish warriors on notice that they’ll be the ones to beat the twins for the Undisputed Tag belts. The Gods through Valhalla said so.

Drew is pissed. He wants them tonight, but Sheamus says they need to focus on the twins instead. In order to make them both happy, Adam Pearce announces that he’s issuing a tag tournament starting next week where Sheamus and Drew will be the first ones against the Raiders. Banger after banger.

We now crawl into Bray Wyatt’s darkness. After Uncle Howdy revealed himself at last and gave Wyatt a taste of his own move, Sister Abigail, Wyatt ravels in his demons. He says that he is Uncle Howdy, well, another part of him anyway. I can’t say it’s excitement Wyatt is feeling, but he ensures he’ll make LA Knight run during their upcoming Pitch Black match at the Rumble.

Elsewhere, Kevin has a chat with Kayla Braxton to make a statement about he and Zayn’s match today. Before he could speak, they’re interrupted by Sami. He’s tired that Kevin doesn’t seem to comprehend of the things he’s making him do; although, Kevin corrects him to say that it’s Roman’s doing. Owens didn’t ask for a match tonight, Roman did.

It’s family stuff based on Sami’s words that Kevin won’t understand, so he’ll take care of him.

And speaking of understanding, Gunther’s momentum when winning against Braun Strowman earlier is a natural disclosure rather than some lucky wish. As boastful as he is, Gunther truly is the best I’ve seen so far.

Let’s watch Morgan become even more unhinged while battling Rodriguez in a fight she instigated by slapping her backstage. Ha! I’m laughing at somebody, but it isn’t the tall one.

Liv sort of looked like a kid having a tantrum as she attempted to shove Raquel using her legs to push forward. It was funny. It doesn’t work though because Raquel shoved Liv over on her backside followed by a heavy boot to the face.

I would have never known if Michael Cole didn’t tell me. Apparently, Liv set a record for herself as the fastest elimination at the Royal Rumble in eight seconds. Ha! Ha! Ha! I twisted my ribs cackling.

Morgan manages to send Raquel into the corner with a slingshot leg maneuver, yet it quickly backfires after a uppercut she delivered. Rodriguez ploughs her down with a harsh clothesline.

After that, something very bizarre happened. Liv randomly started banging her head against the top turnbuckle for no reason, or as a way to fire herself up. When I saw that, I thought of Alexa Bliss during her Raw Women’s Championship match versus Bianca Belair not too long ago. Bliss abruptly lost control of her being once Uncle Howdy or Bray Wyatt’s signature upside down bee showed up on the big screen.

If anyone remembers correctly, Bliss had run-ins with Bray in the past when he was known as The Fiend once he went solo. He brainwashed Alexa, and she turned gothic and unbarred. I thought that was the case with Morgan, but I realized the upside down bee wasn’t flashing on the screen. So what the hell? Even Raquel questioned what was going on.

Wade Barrett says Morgan is a sadist and a masochist. He might be right…

Liv uses Raquel’s momentum to push her into the post then the steel stairs for added measure. Morgan had plans to body slam Raquel after retrieving a table, thankfully, Rodriguez rolls away in time and back inside the ring.

Morgan leaps from the top, Raquel swats her away then brings her up for a Tahana Bomb victory.

Sonya Deville rains down on Adam Pearce for not agreeing to her rematch versus Charlotte Flair, since she lost last week. Ha! Deville has no desire to beat 29 other women for an opportunity, so what does she plan on doing? She attacks Charlotte from behind, of course.

Somewhere backstage, Deville and Flair were brutally tearing each other apart. For some odd reason, the officials who attempted to stop the fight kept blocking Charlotte from pursuing Sonya; even though, Deville is the one who started it and continued the dispute. It didn’t matter once Pearce showed up from someone’s ass crack, the battle was still raging between the two ladies.

If Sami wins this match, I guess the animosity between him and Owens will die down. But that’s an ambitious wish. Ha!

Kevin shoulder tackles Sami on his ass so quick, it made Zayn look petulant once he stood up and splashed Owens across the face. That enrages Kevin so much, he beats his former friend with multiple blows to the head. Sami rolls out from the ring twice, Kevin was about to go after him the second time, yet he’s met with a hard knock on the jaw.

Zayn quickly uses that to drop Kevin on the back of his neck excruciatingly hard.

Kevin was looking for the Pop Up Powerbomb, which Sami swiftly turns it into the Blue Thunderbomb for a failed cover.

Owens finally retaliates with a massively agonizing Brain Buster from the top that hurts both him and Sami. Later on, Kevin was hammering away at Sami, yet suddenly, Zayn reverses it into two Exploders.

Sami was getting ready for the Helluva Kick, but shockingly, the Usos and Solo Sikoa slide in to beat Kevin up. I was surprised. Sami was surprised. Michael and Wade were surprised. What the hell? Heyman said none of them were here; although, I should have known better than to listen to the words of a snake.

Sikoa even smashes through the commentary table with Kevin on it. I’m not sure, but I think Sami could have won and please Roman at the same time. So why this?