NWA POWERRR: More shocks and submission on the second week of The Champions Series 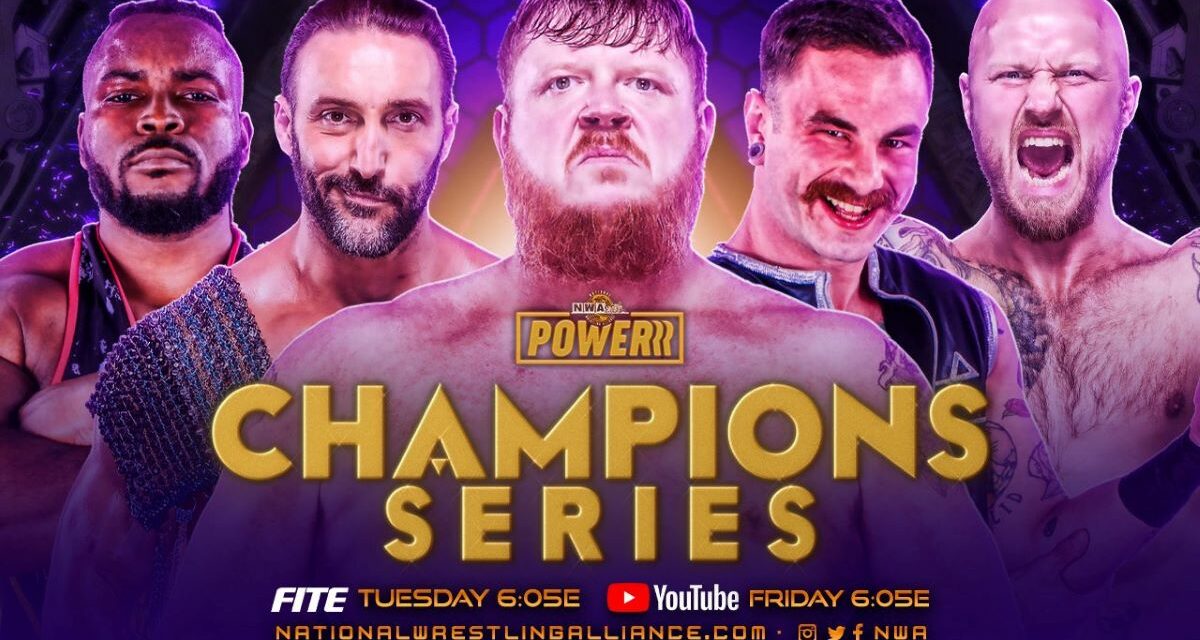 It’s the second week of The Champions Series, and we have four more teams vying for a chance to at future title gold.  Last week, the National Wrestling Alliance went over the teams and the way to earn points, and then on NWA USA two of those teams advanced to the second round.

So it’s time to see what’s ahead in the Skyway Studios in Nashville, TN.  Joe Galli and Velvet Sky have the call and we get our four teams in this bracket:  Team Rock N’ Roll (led by Kerry Morton and  Ricky Morton as the captain’s assistant), Team Pretty (Co-Captained by Pretty Empowered, with Aron Stevens as the assistant), Team Rebelion (co-captained by La Rebelion), and Team Gold (led by Jordan Clearwater and assisted by “Magic” Jake Dumas).

We get some team predictions from Kerry Morton, Kenzie Paige, Big Strong Mims, Rhett Titus, and Trevor Murdoch on their chances to score points.  The night’s best line is from Titus, who declares whether wearing red or pink, he will get the job done because he is a Professional.  You can bank on that since he started out wearing a bow tie to the ring once upon a time in Honor.

But let’s kick off the show with the First Match of the Night: 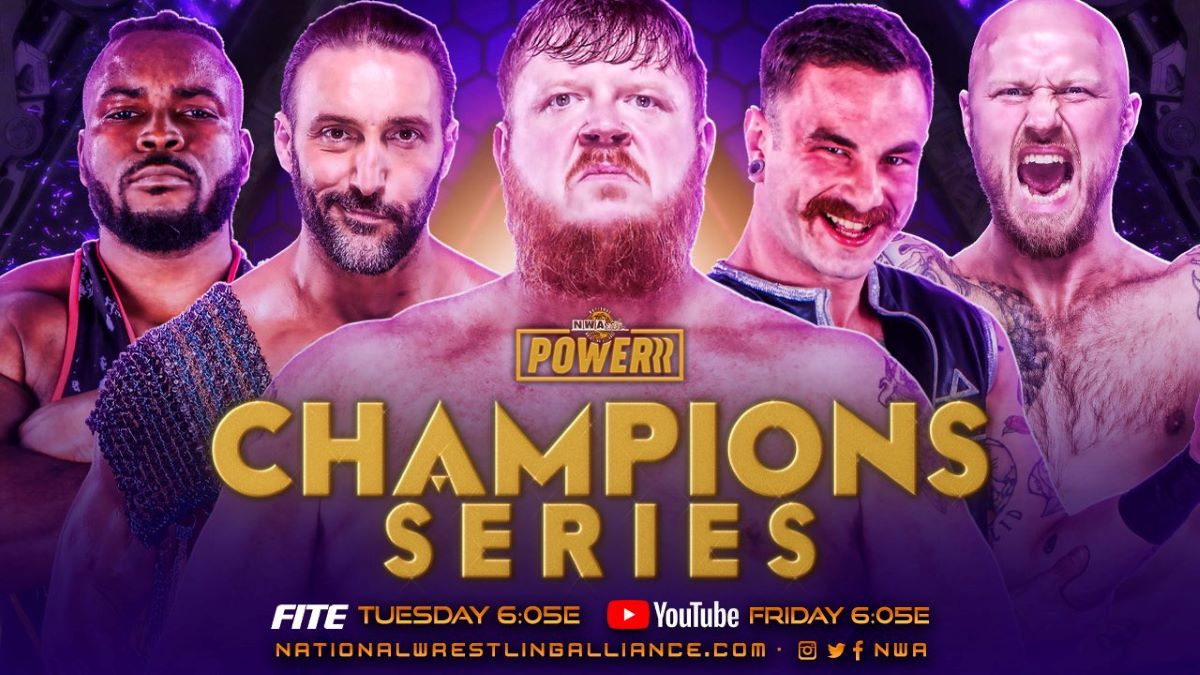 Mims and Titus start out and they go back and forth, but The Professional has a wristlock and tags Murdoch in, and he gives a sound beating to the Big Strong one, and even lands crossface blows across his face.  Mims reverses with a slam and big splash on the former NWA champion for a near fall.  He tags in Draper who starts strong but it isn’t long before the numbers game catches up.  Titus and Murdoch work well together as the double team Draper with a gut shot and Murdoch kicks his face, and a leaping bulldog by Titus allows a cover, but he gets a two count.  Titus goes back on the attack, but a military press by Draper displays his strength, but he wriggles out. Mims distracts Draper and Titus land with a boot in the corner and gets another two count.  Draper returns with a gutwrench slam to Titus, and Mims locks in a bear hug but the Mile High Magnum escapes the painful submission.

Tag back to Titus, and Draper focuses on attacking the lower back of The Professional and gets a Stretch Muffler to an airplane spin, and Titus grabs ropes in desperation to break the hold.  Draper tags back to Mims and Titus fights back.  He goes up the top for a missile dropkick but Mims catches him and slams Titus hard to the mat for another near fall.  Back to Draper and he goes back to work softening up Titus.  He goes up for an axe handle smash, and Titus dropkicks him in midair to create some space.  He crawls to his corner and gets the hot tag to Murdoch, and he takes Team Rock N’ Roll to the wood chipper.  Soon, all four men are in the ring but Draper low bridges Murdoch out of the ring, and Titus returns the favor as well.  In all the confusion, Mims is in the ring trying to find an opponent, and Murdoch rushes to the other side of the ring and delivers the flying bulldog for the pin and the win.

That gives Team Pretty the early lead in the Series.

Next up is a rematch of sorts between… 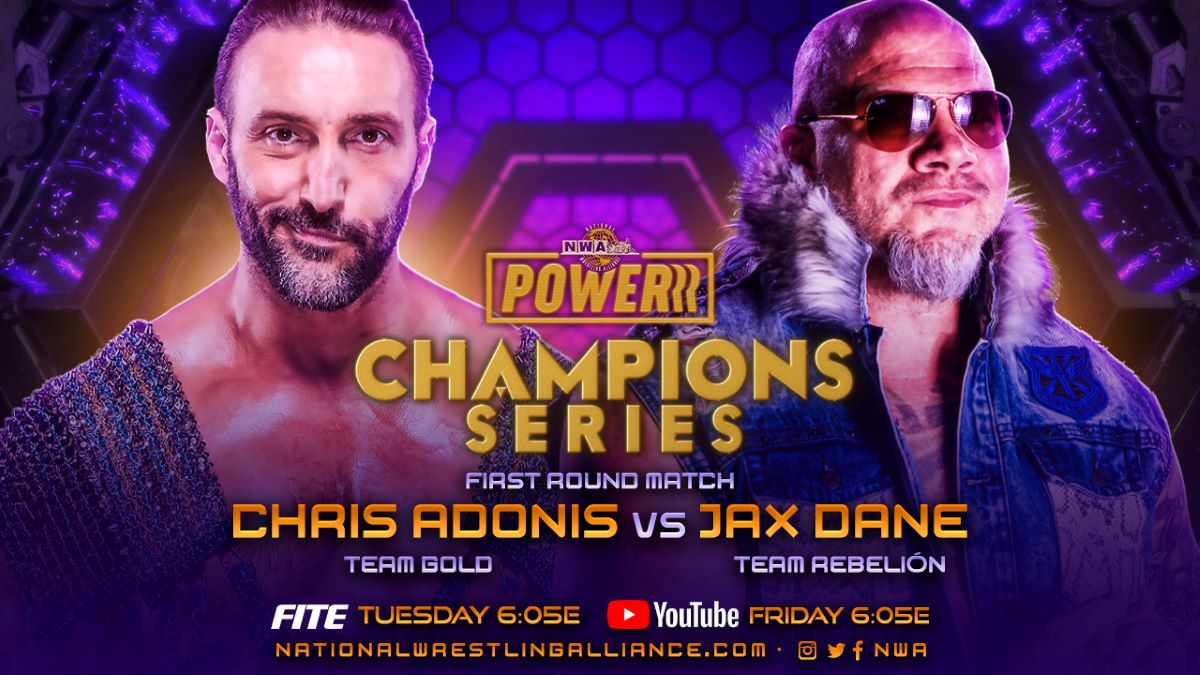 This is essentially the rubber match from the last time both men faced each other at the Alwayz Ready PPV.  While there is no title at stake, there are points to be had in The Champions Series.

As the bell rings, Adonis immediately goes to the Masterlock, and Dane reaches for the ropes to break the hold and he takes a powder outside the ring.  After he collects himself, Back into the ring he goes, and Adonis attempts the submission again.  Dane blocks and shoves him back to the corner and then nails Adonis with a back elbow.  The Gold Branded one is on offense and tackles Adonis, as Clearwater coaches on the outside.  Adonis trips and then jabs away at Dane’s furry vested chest.  Adonis mounts the middle turnbuckle and lands with punches to Dane’s head.  He tries to grab him but Dane gets the ref in between them and uses the opportunity to poke Adonis in the eyes. He goes for a suplex but Adonis counters.

Now Silvio comes out to distract the ref and Dane gets the Samoan drop on Adonis, unzips the vest, and finally gets serious as he whips Adonis hard into the corner that shifts the turnbuckle from the force.  Dane locks in a bear hug and Adonis starts to fade, but he fights through to escape the hold, and he lands a flying shoulder tackle and follows with a clothesline.  Adonis runs for a tackle and eats a big boot from Dane. Dane rushes at Adonis but eats a spinebuster for a two count.  He signals for the Masterlock and once again attempts to lock it in, and Dane backs him into the corner. One Dane Event later and add insult to injury by attempting to cinch Adonis in a Masterlock of his own.  Adonis breaks the hold, sends Dane to the ropes, and finally cinches the Masterlock. Dane knows he’s in trouble and breaks out with a mule kick and the ref calls the match.

Your Winner via Disqualification:  Chris Adonis

Since that was an extreme disqualification, three points are awarded to Team Gold to get them on the board.  Some members of Team Rebelion aren’t happy, but Dane pays them no mind.

We get promos with the co-captains Ella Envy and Kenzie Paige of Team Pretty, along with Stevens on how they’re going to guide their team to victory (even though Envy thinks she should be just the only leader of the team, but “whatevs” as the kids say).  Taylor is just all about taking Team Pretty to school, which leads to the next match… 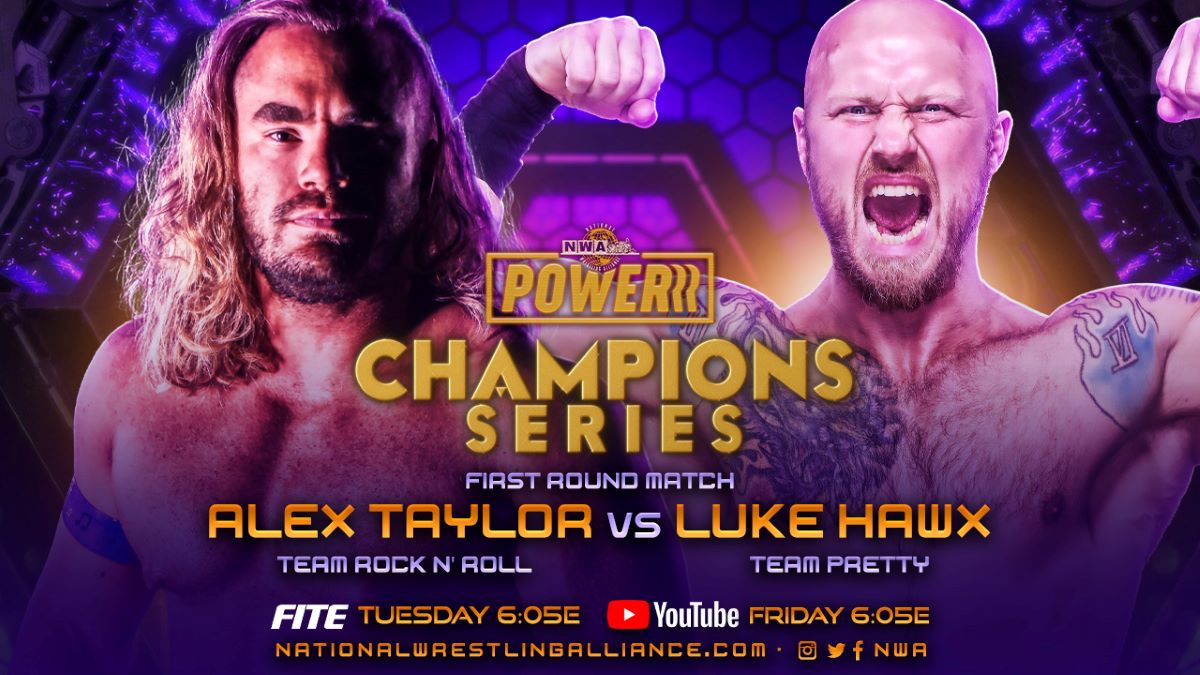 Hawx extends a hand at the beginning of the match, and Taylor refuses.  They tie up and Hawx pushes Taylor into the corner and he once again extends his hand, but Taylor slaps it away.  He hits the ropes and Hawx grabs Taylor midair for a modified slam and a shoulder tackle, followed by a backdrop to cover for two.  Hawx sends Taylor to the corner and goes for a splash, but Taylor escapes to the apron, and then he knees Hawx in the gut between the ropes and plants him on the apron in a scary spot as he tumbles to the concrete.  Taylor punishes the Souther Stomper in and out of the ring, and a double axe handle gets him a two count.  Taylor is in control for most of the match. He goes for a fireman’s carry, but Hawx wriggles out and nails a spinning kick, and both men are down in the center of the mat.  Hawx fires back with forearms and a front slam for a two count, and then props Taylor on the top turnbuckle, but gets pushed off and his inner thigh catches the top rope to injure the…err, little Hawx.  Taylor goes for a front senton and misses the mark. Hawx goes for a big move on the top turnbuckle, but  Taylor manages to fight out and delivers a cradle shock for the pin.

Your Winner via Pinfall:  Alex Taylor

May Valentine is backstage with Jax Dane and Chris Silvio, Esquire on what his actions with Chris Adonis mean to the overall picture of The Champions Series.  Silvio speaks for his client and goes into three points:  He claims the Masterlock (full nelson) is an illegal hold that Dane managed to overcome.  Second, Dane doesn’t care about points, because this is about The Dane Event. Finally, everyone in the NWA, according to Silvio, will find out why Dane is the winningest champ in NWA history.

On a scale of one to Rudy Guiliani, it’s not completely bats*** insane to say that, legally.

(Note to Self:  Get my lawyer to see if Silvio’s arguments will stand to The Smell Test, as it were.)

The captain of Team Gold, Jordan Clearwater, trash talks about Team Rebelion.  Mecha Wolf and Bestia 666 both doubt Team Gold’s chances, and Corino and Cazana make bold predictions on their respective outcomes, but let’s go to The Main Event as it is… 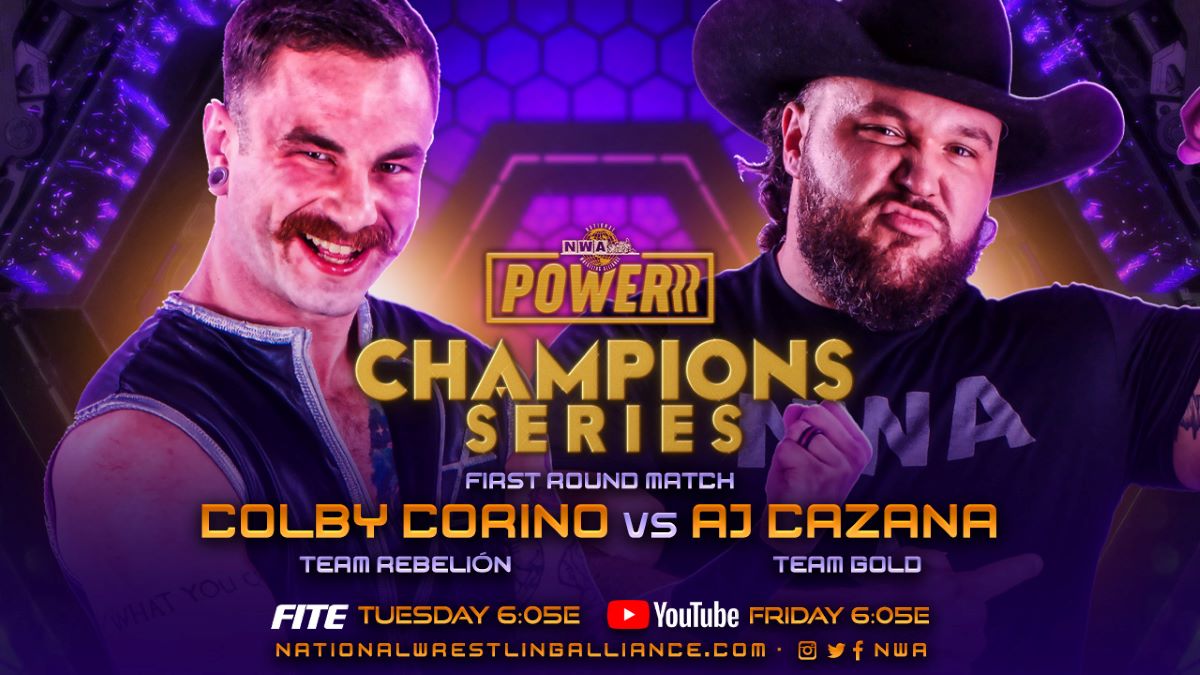 Corino with a cannonball misses and Cazana goes right to a leg submission, and Corino reaches for the ropes to break the hold.  From there, Corino uses his speed to avoid the Country Gentleman, but it isn’t long before Cazana catches him and lays a beatdown on the Last Bastion.  La Rebelión coaches Corino on the outside, and Cazana continues the beatdown of his opponent.  He attempts a knee drop that misses, and Cazana pulls up lame.  Corino targets the leg and nails a dragon screw leg whip, and he proceeds to keep the big man off his feet.  Corino plants him with a corner DDT and covers for a count of one.

Corino goes back with another dragon screw and then transitions to a leg submission like an STF, but Cazana reaches back and pulls Corino to a pin for a two count.  Corino goes for a flying corner clothesline, but Cazana catches and plants him with an STO, a la Samoa Joe.  He takes a second for an Elbow drop, and Corino rolls away for Cazana to miss the mark.  Then Corino goes right back with a single-leg crab, but Cazana powers through and gets him in a knee bar. Corino stomps the bad leg and kicks his head and Cazana tightens the grip. Corino reaches for the ropes to break the hold.  Cazana sets up for a powerbomb and Corino punches his head and manages to send both of them over the top rope to crash on the concrete floor.  Corino gets on the ring apron and leaps to a huracanrana, but Cazana is too big, and he powerbombs him right on the ring apron edge.  They go back in the ring, and Corino attempts a sleeper and transitions to a crossface chicken wing.  Cazana tries to fight it off but ultimately passes out from the pain.  That means…

Your Winner via Submission:  Colby Corino

That submission win garners Team Rebelion six points to take the lead in their bracket of The Champions Series, as the show goes to the credits

I’m a sucker for tournaments, and The Champions Series scratches my itch.  This was a great show top to bottom, and guys like Alex Taylor and Colby Corino stood out in their respective matches.  I’m also curious if Adonis/Dane becomes another feud for The Dane Event.

Anyway, see you in seven, and be sure to catch this NWA USA to see who advances in this bracket of The Champions Series.