The Champions Series returns on this NWA POWERRR 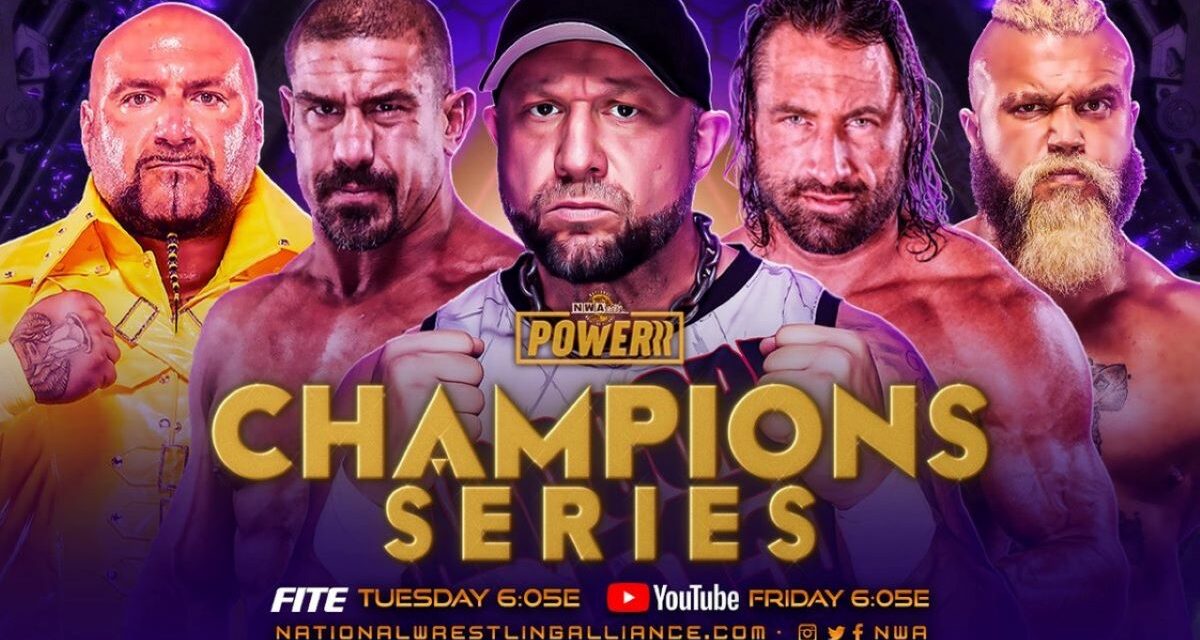 It’s the return of The Champion Series on this episode of NWA Powerrr, where teams of eight battle it out and every member of the winning team will receive title shots in the future.  It’s time to lay out the week-long event by the National Wrestling Alliance, and Kyle Davis gives us the breakdown of how the points will be awarded:

So far, the Teams were selected at random before the show, and are captained by various NWA Champions.  The announced teams are: Team Great helmed by The Great Cyon, Team Brickhouse by Kamille, Team Fixers by Jay Bradley of The Fixers, Team Gold by Jordan Clearwater, and Team Tyrus by the NWA champion himself.

We’ll learn more about the other teams in the weeks ahead, so let’s head to the Skyway Studios in Nashville, TN.  Joe Galli and Velvet Sky have the call.  Tim Storm is away on assignment, Galli informs us, but we’ll start with the First Match of the Night…

This is a game of one-upmanship between the Asgardian Warrior and Bully Ray, and neither man is backing down.  Ray gets to throwing bombs and then whips Odinson into the corner turnbuckles with some force.  Odinson is no slouch as he nails Ray with his patented Asgardian Uppercuts, followed by a big uppercut.  He rushes at Ray in the corner but explodes with a huge lariat and covers Odinson for a two count.  Odinson follows up with a lariat of his own for a two count.  He once again charges but Ray cuts him in half with a spear and gets another two count.  Odinson returns the favor for another two count of his own.  Both men are evenly matched, and as Odinson gets in the corner and sprays The Purpose on his teeth to become shiny and chrome, Ray stops him and attempts the Bully Bomb.  Odinson frees himself and delivers the Asgardian Pounce, but time runs out.  Therefore…

The Match ends via Draw, and Two Points are Awarded

Earlier in the day, May Valentine spoke backstage with the NWA Heavyweight champion Tyrus and BLK Jeez. Tyrus spoke of his and IdolMania Sports’ historic dominant run, and how he now holds the Twelve Pounds of Gold (Because it’s two pounds heavier when he is the champ, naturally). Even though he didn’t pick the team, Tyrus is confident of victory during The Champion Series. Jeez is also confident, and even wants to add more gold to their stable by taking a stab at the NWA Junior Heavyweight title.  Tyrus says that’ll come, but it’s time to focus on the Series.

So let’s head to the next match, which is… 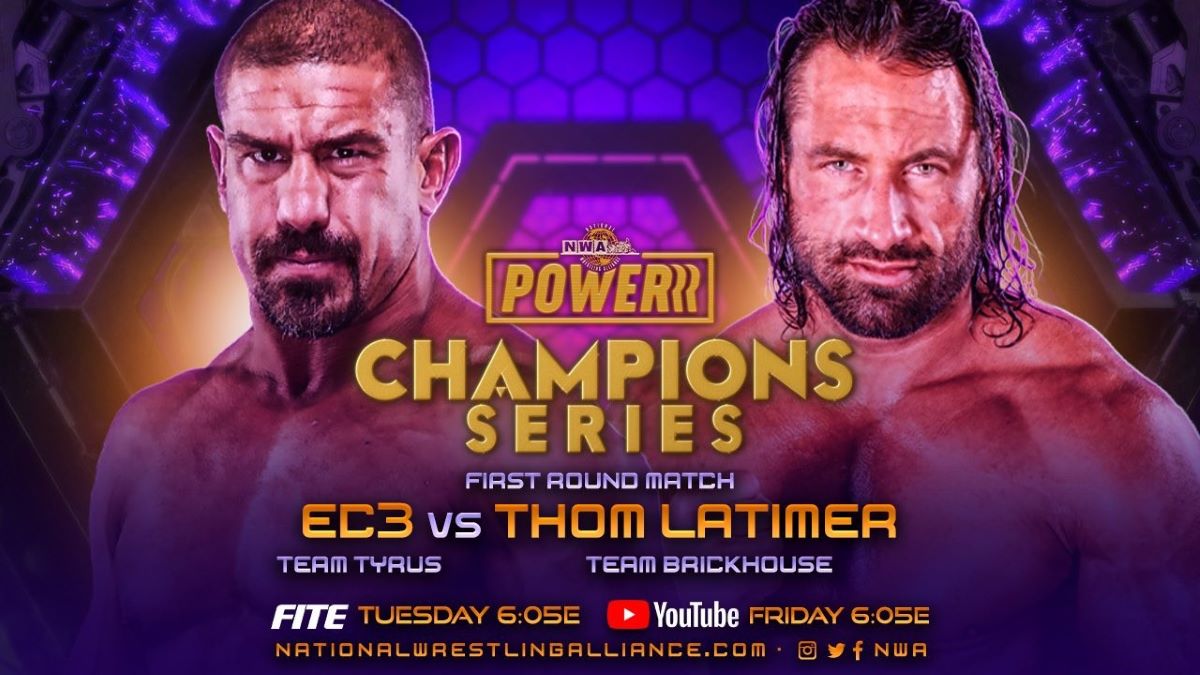 As the bell rings, he tries to get inside Latimer’s head but The King of All Evil ain’t having it.  He’s able to get the better of The Essential Character, but soon EC3 reverses and gets a Thesz Press on Latimer and digs his thumb in his eye.  The ref tries to get some semblance of order and then calls for the bell, and Latimer gets awarded one point for the “Grade One Disqualification.”

Then, for reasons I can’t figure out, the match starts up again, and EC3 goes back to raking Latimer’s eyes again. He drives Latimer’s face into his knee and attempts the One Percenter.  Although blinded, he reverses the finisher and gets EC3 into a crossface.  As he cinches in the submission, EC3 reaches the ropes but Latimer is so blinded he doesn’t see and still keeps the hold locked in.  Again the ref tries to regain order, but Latimer violently shakes him off and the bell gets called again.  That means…

Your Winner via Extreme Disqualification:  EC3, and he is awarded Three Points

Latimer is frustrated that he has EC3 still in his head, which affects Team Brickhouse’s chances in the Series.

Now let’s go back to ringside for the… 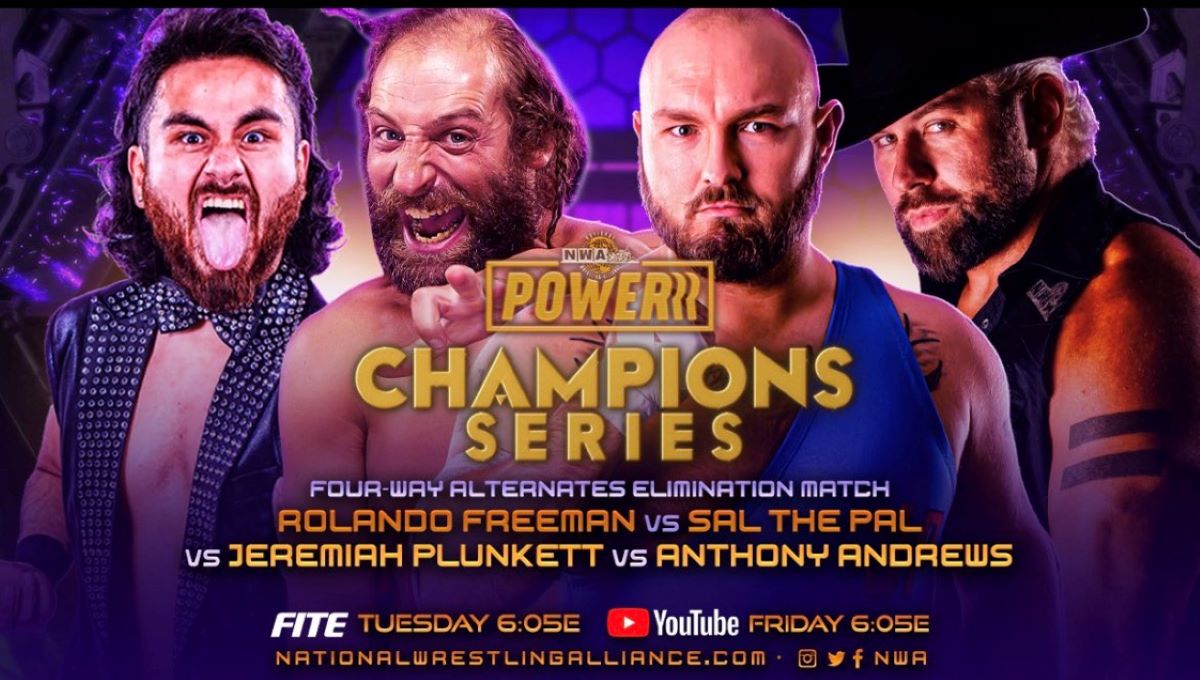 Basically, the person who outlasts the rest will have their pick of which team they can be on.  The first person eliminated with just be assigned to a random team.  Again I just wish the rules were explained better like last time and we’d see which wrestlers got assigned to which team.

As Sal is distracted by Freeman’s “shiny” bowtie, the match devolves in a free-for-all, and Andrews starts cleaning house by using Freeman as a club.  Freeman somehow manages to get a sunset flip on the big man, and he, Plunkett, and Sal stack him up for a pin, and Andrews is eliminated.

Freeman tries to act tough, and Plunkett offers him a free shot.  He hits him in the face and as Plunket is unfazed, Freeman lands a huracanrana and a missile dropkick to the Tater Peeler.  Sal gets back in the action and proceeds to stomp Freeman, but then Plunkett flips Sal onto Freeman to knock him down, and Plunkett hits Sal with a belly-to-back suplex for a two count. He also nails a suplex to Freeman who rolls out of the ring before Plunkett can cover for a pin.  Sal comes from behind and wraps his legs in the Figure Four.  As Plunkett fights off the pain, Freeman comes back in and attempts to pin either man, but no dice.   He then lands a running senton to Sal and covers for the three count.  Plunkett eats The Biggest Boot from Freeman, and that’s enough to get the pin and the win.

We’ll find out later which team the Biggest Brother will end up in the Champion Series.

Earlier today, May Valentine was with The Fixers. Bradley notes that whoever made up the teams is almost a genius like him. He says their team has the fiercest fighting force with him and Wrecking Ball Legursky and his team has a Viking(Odinson), a couple of broads (he catches himself and means a couple of chicks in The Hex)…and Rush Freeman.  They’ll gonna win The Champion Series because (wait for it) FIXERS RULE!

And now for something really different… 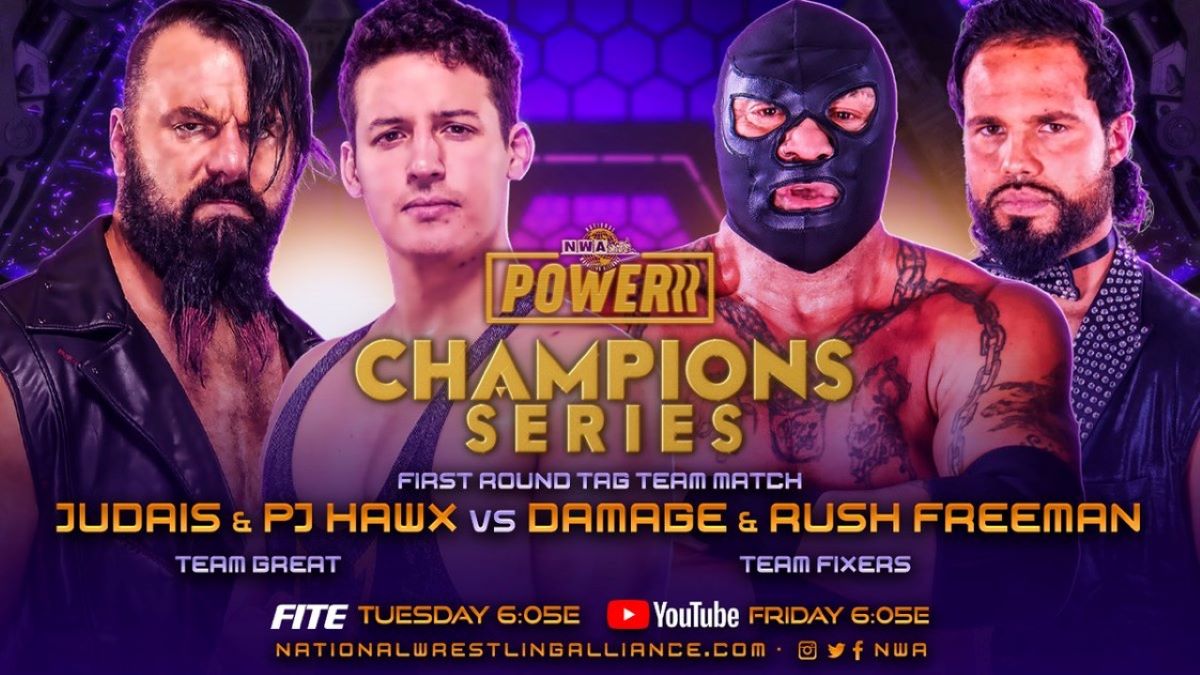 This is an interesting matchup as most of the tag specialists are trying to find some cohesion in their new units.  Damage starts forcefully on the younger Hawx and for all his technical skill he can’t take down the big man.  Freeman tags in and the match now favors Hawx’s speed and he gets a tag to Judais.  Freeman is able to take it to Priest of Punishment until a lariat turns him around and he covers for a two count.  Hawx tags back in but gets isolated in the Team Fixers corner and Damage does some…err, damage.  Luke Hawx is in the crowd shouting encouragement to his son.  Freeman is back in and Hawx manages with a leaping leg lariat to create some space.  A hot tag to Judais and he unleashes all hell on the opposing team.  He sandwiches Damage and Freeman in the corner with a running splash.  Judais prepares for a choke slam, but Damage comes out and lands a spinebuster on the big man.  Freeman is a little miffed at his tag partner, as signs of dissension appear, but Hawx comes back in the ring and dropkicks The Spectacular into Damage, who tumbles the outside.  A choke slam by Judais ends it, and that means…

Your Winners via Pinfall, Judais and PJ Hawx

Team Great now has five points for a total of seven, and Team Fixers still have two points.

Valentine interviewed The Great Cyon earlier on his team’s chances in The Champion Series, and he credits his dad Austin Idol for his guidance and wisdom.  He believes that with him as the captain following Idol’s teachings his team will become great like him. Valentine inquires about Idol’s whereabouts, and Cyon mentions that Idol is on a specific mission and it’s none of her business.

Valentine speaks with Kamille, and she is not happy with EC3 and how he speaks these weird riddles. She can’t figure out why he’s got a weird fetish for her man Latimer. Kamille talks about how Team Tyrus is looking for quick shortcuts to win, and she is confident her team will win the right way in The Champion Series.

That brings us to The Main Event, and it’s… 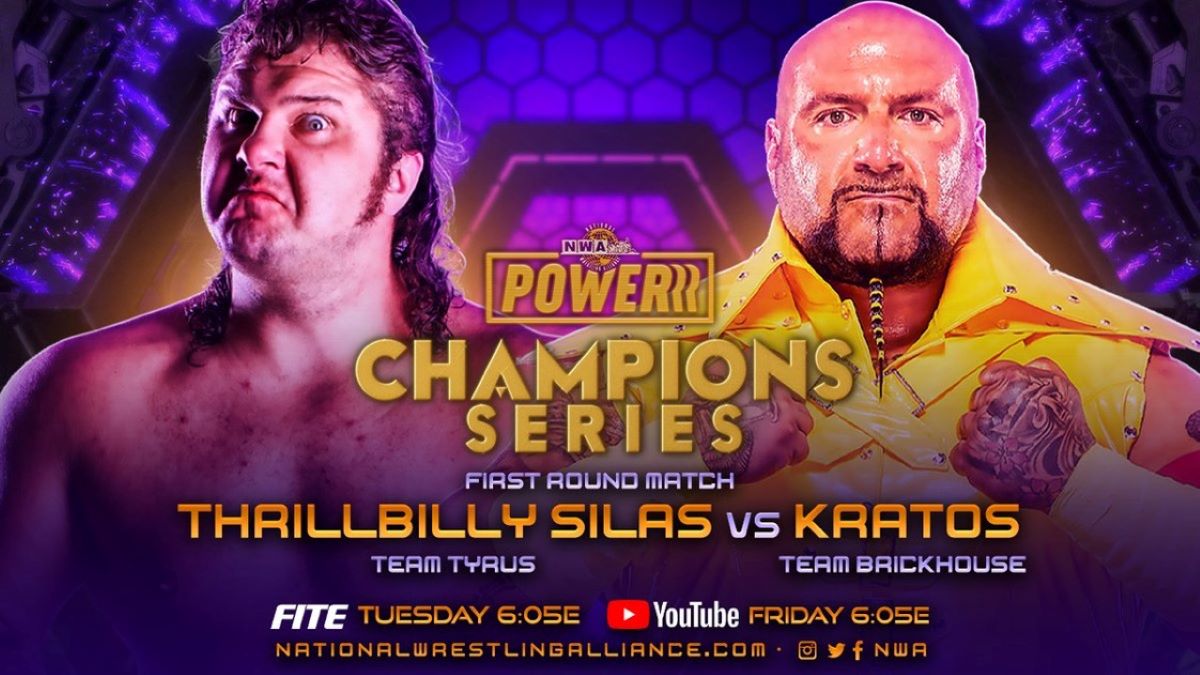 To quote Todd Keneley, this match is going to the land of the big uglies, and both men are going full throttle.  Kratos is taking it to Thrillbilly with a powerslam and a splash that just misses the mark.  Mason nail The Most Feared with a running tackle to cover and gets a two count.  Mason tried to put him away but cannot.  He then tosses Kratos like a sack of potatoes and covers for another two count.  As both men stand toe to toe, this is a case of an unstoppable force meeting an immovable object, but it’s Kratos who wins out with a high hip toss.  Not to be outdone, Mason fires back with a flying shoulder tackle.  He goes for a piledriver but Kratos escapes and nails Mason with a forearm followed by a discus clothesline in the corner and then suplexes Mason halfway across the ring.  Kratos charges and Mason manages to dodge the attack. A belly-to-back suplex by Mason and he follows with a Stan Hansen-esque lariat and adds the punctuation with a springboard elbow drop, but Mason’s efforts only garner a two count.  He goes for the Thrillride but Kratos averts and nails a lariat of his own to cover and Mason manages with a foot on the rope to break the count.  Mason finally delivers Thrillride and covers Kratos for the one, two, and three.

Mason’s win adds five points, so Team Tyrus is ahead with eight points, tying with Team Great.  The Fixers have two points and Team Brickhouse has one point.  Of course, there will be more developments as the first night of The Champions Series comes to a close.

I am digging the new chapter that EC3/Latimer are adding to their feud, and Mason/Kratos tore down the house in the main event.  My only quibble is that I wish the teams were defined early on, as well as the rules.  But I am happy with the action taking place.