NWA USA: The scores change on the second day of The Champions Series 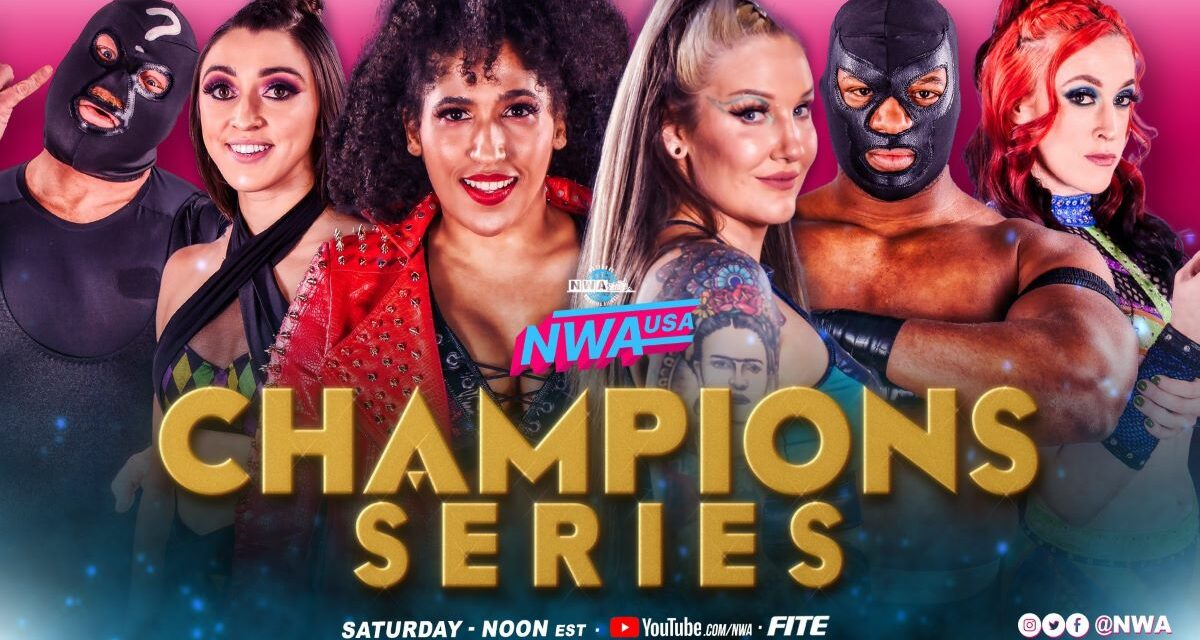 It’s the second day of The Champions Series and there is a lot riding on the four teams wanting to move up in the National Wrestling Alliance.  As for the four teams involved, scores are as follows:

Whichever of the two teams gets ten points will advance to the second round of The Champions Series.  We then get some promos with the captain (and captain’s assistants) of Team Tyrus (Tyrus and BLK Jeez), Team Brickhouse (Kamille and Pollo Del Mar), Team Fixers (Jay Bradley and Wrecking Ball Legursky), and Team Great (Cyon), along with the various members of each team on being paired with the teams and their hopes in this tournament.

A lot can happen as we head to the Skyway Studios in Nashville, TN.  Joe Galli and Velvet Sky have the call and this is the First Match of the Night… 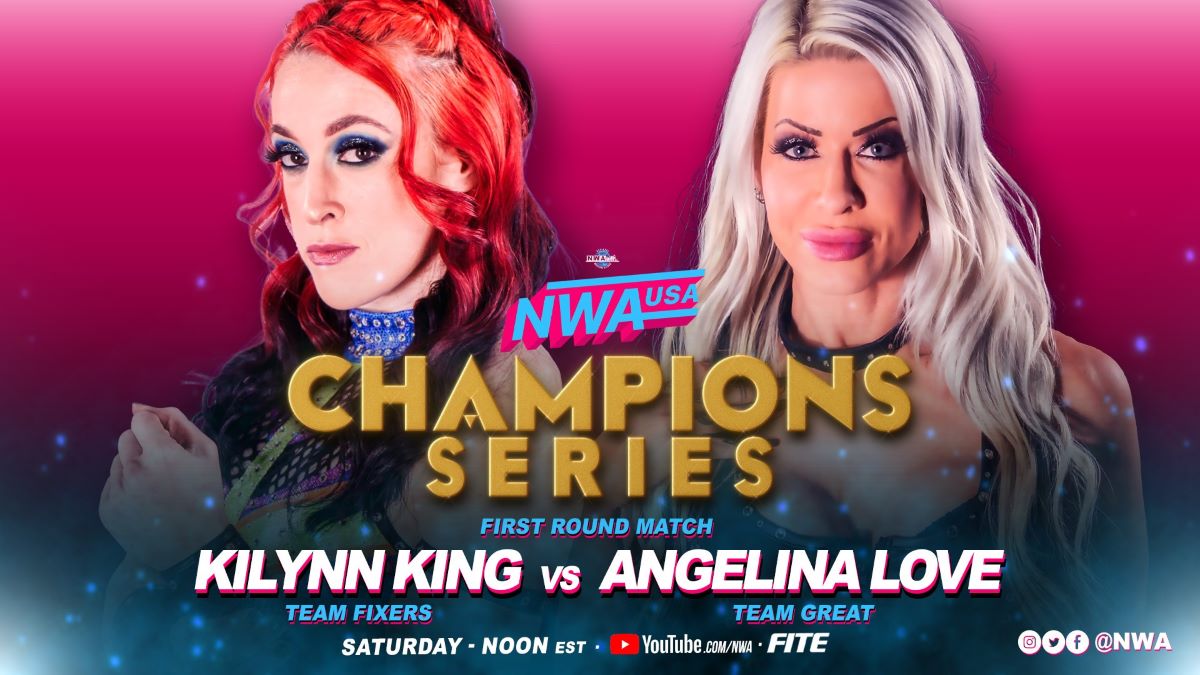 This is the first time both women are facing each other in the NWA, and already this is a great matchup that has Love utilizing her veteran savvy, and she takes it to pinfalls but cannot capitalize on the Majesty of Muscle.  King goes for a crossface, but Love escapes the hold.  Now Love goes up the top turnbuckle with a crossbody to cover King, but for some reason, the ref delays on the count, and King escapes, much to Love’s chagrin.  King comes back and lands with a DVD to cover for a two count, and then Love attempts the Botox Injection finisher, but gets blocked.  King flips her and goes back to the crossface again, but Love transitions to the Koji Clutch and King barely escapes the submission.  Love nails the Lights Out and goes to another Koji Clutch, but King fights through and transitions back into the crossface, and Love has no choice but to tap out.

Your Winner via Submission:  KiLynn King

That submission win gives six points to Team Fixers for a total of eight points.

We go to more promos where Tyrus bashes Latimer on his wife leading the team, and Kamille and Thom Latimer answer back to Tyrus’ criticisms.

And that leads to the next match, which is… 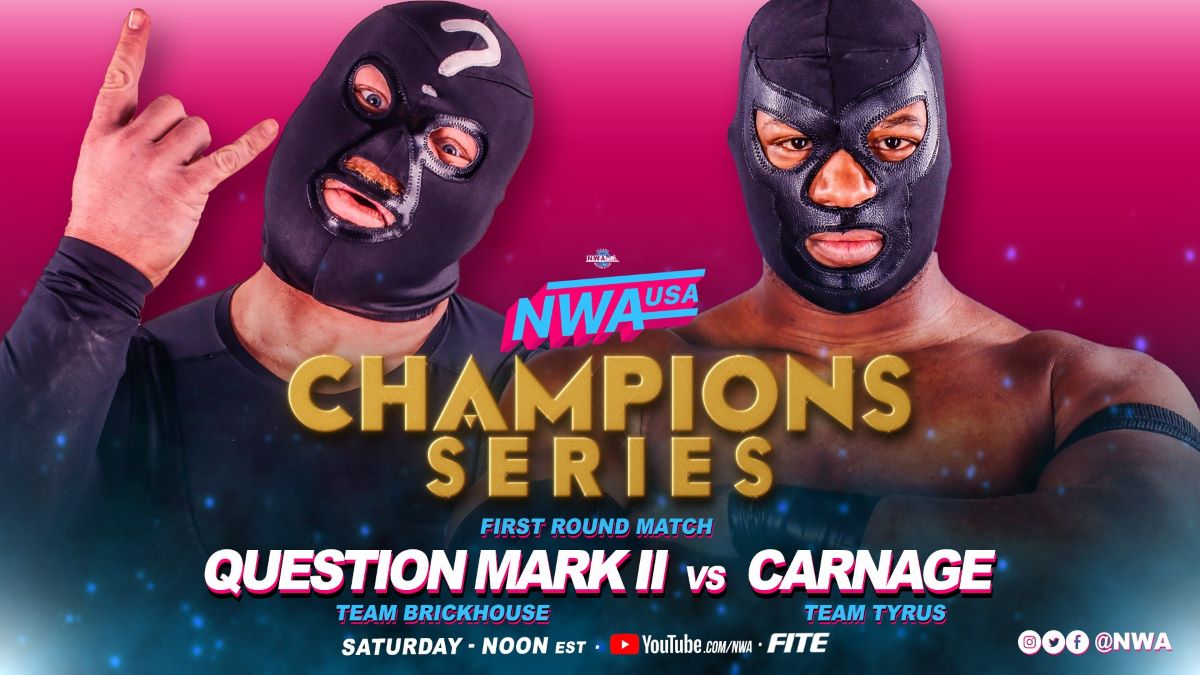 Galli notes this is the first time both men have been in the squared circle since Mark II was ambushed by Aron Stevens and his new Blunt Force Trauma team weeks ago.  Mark II takes it to Carnage early, but a mistimed splash in the corner allows Carnage to take control.  Carnage lands with a standing dropkick and clubs Mark’s chest, but Mark fights back with Mongrovian “Kuh-Rah-Tayyy” but Carnage head-butts him to the floor.  Carnage tries to rip off mask, but Mark fights back.  Unfortunately, a powerslam by Carnage allow him to cover Mark, but he gets a two count.  A well-timed Mongrovian spike finds its mark and Carnage is down, but Kamille gets on the mat and calls an audible.  As Mark listens to the Team Brickhouse captain, Carnage rushes and misses the mark, and that opens the door for Mark to cinch in a Mongrovian rear naked choke, and Carnage taps out.

Your Winner via Submission:  The Question Mark II

Another submission win and those six points give Team Brickhouse an overall seven-point lead.

Bradley and Team Fixers talk about being the best team in The Champions Series (even though team member KiLynn King has doubts after that solved a 500-piece puzzle with 300 pieces), and Angelina Love of Team Great says (as a Canadian) if they were to go to Canada they be sent back quickly.

Which is a great segue as any for the next match… 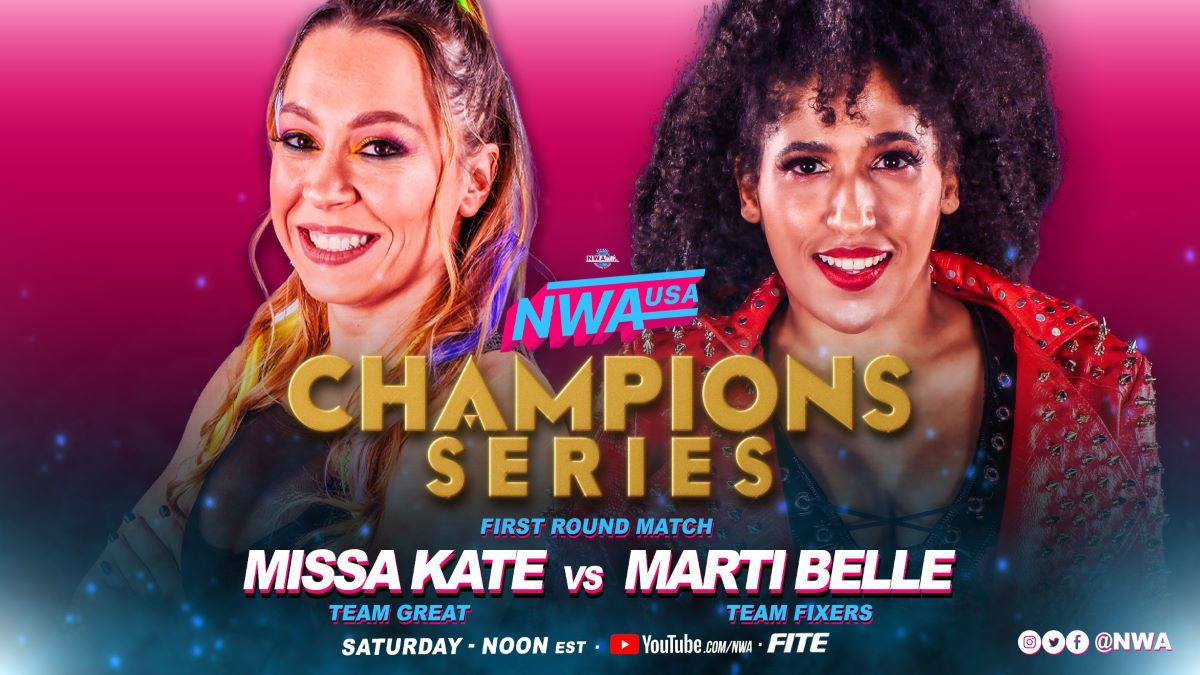 Belle and Kate trade moves, and then Kate shoves her into the corner and gives her a spitwad, and that unleashes the anger in the Hex member, as she takes Kate to the woodchipper.  Kate comes back with a stomp to her spine and a stiff kick to cover Belle that gets a two count.  Now both women are throwing live rounds and Kate nails with a roundhouse kick for just a two count.  Belle gets a discus forearm to Kate and lands Hells Belles to cover for another two count.  Kate throws her out of the ring and nails a rope-assisted dropkick to Belle on the outside, and now both women brawl on the outside.  The ref starts the countout, and Kate gets in the ring at the last second, and Belle just misses the ten count.

Your Winner via Countout:   Missa Kate

Even though it wasn’t a clean win, Kate gets the two points and Team Great get the ten points to move to the second round.

And now that leads to the Main Event which is… 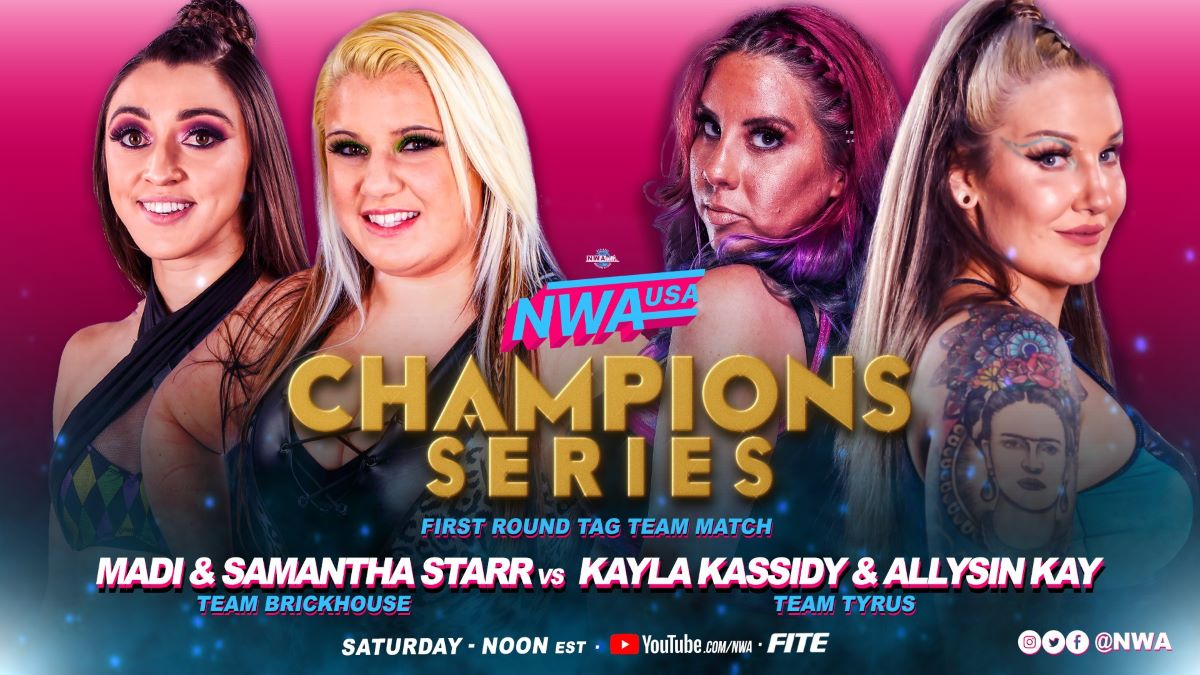 This is a do-or-die moment, as Team Brickhouse and Team Tyrus are both within striking distance of making it to the second round.

Kassidy and Kay are definitely not on the same page, as Kassidy sends Kay out so she can start, and Starr levels the upstart that once hung on the arm of Mercurio (in case you were wondering why she looked familiar).  A tag to Madi and she and Kassidy go at it, but Kassidy wants a tag, and Kay backs off the mat (much to Tyrus’ dismay) and Kassidy is left to fend for herself where Madi is still on offense.  Kassidy nails with a facebuster but Madi transitions to a dragon sleeper. Kassidy pulls her hair and the ref calls a basic disqualification to earn Team Brickhouse one point

Kay gets in the ring and she cleans house with Madi, and Kassidy tags herself back into Kay’s chagrin, and Tyrus is livid on the outside by this breakdown in the team communication.  Madi gets a tag to Starr and she goes on the offense with a hip attack to batter Kay’s head with her knees to the mat.  A tag back to Kassidy fights back, and Kay tags in the hard way and gets a spinebuster to a Boston Crab but Starr manages to push her off.  Kay rushes into the corner but Starr evades and she comes back with a bulldog that gets a two count.  Kay shoulder tackles in the corner and chops at Starr.  She whips her into the corner and a splash to cover for two.  Kay goes for a straightjacket choke and then releases.  She goes back to a Boston Crab as Kassidy knocks Madi off the apron, but the time limit expires, and…

Two points are awarded to each team

That means both Team Brickhouse and Team Tyrus get ten points, and that leads to a tie-breaker with the alternates for each team that means your (actual) Main Event is a…

Both men were selected as alternates from this last NWA POWERRR, and Plunkett has an axe to grind on the Biggest Brother of The Spectaculars, as this match goes to no time limit, as their has to be a winner.

Rolando gets in his grill, but Plunkett overpowers him early on, but Rolando lands a low dropkick that trips up Plunkett for a near fall.  Plunkett attempts with a wheelbarrow suplex but it gets turned to a bulldog by Rolando, followed by a European uppercut to a back elbow and he goes into the corner and gets a bronco buster on the Tater Peeler of Tennessee.  Rolando hits the ropes and Plunkett nails him with an elbow, and then adds the pain to the Biggest Brother.  Plunkett whips Rolando hard into the corner, but he returns fire with a missile dropkick.  Rolando fights back and nails a European uppercut and follows with a senton to cover Plunkett for another two count.  Plunkett comes back with a Saito suplex, and a DDT for one, two…Rolando touches his toe on the bottom rope to break the count.  Plunkett is doubly frustrated and goes to finish him off.  Rolando nails with a headbutt and then delivers the Biggest Boot and covers for the one, two, and three.

Your Winner via Pinfall:  Rolando Freeman

With that win, Team Tyrus ekes out a victory and advances ahead to the second round as the show goes to the credits.

The second night of The Champion Series has a lot of drama and thrills, and the final match with Freeman/Plunkett is one of the reason to check out the NWA.  Also, the women really carried the entire card of NWA USA.