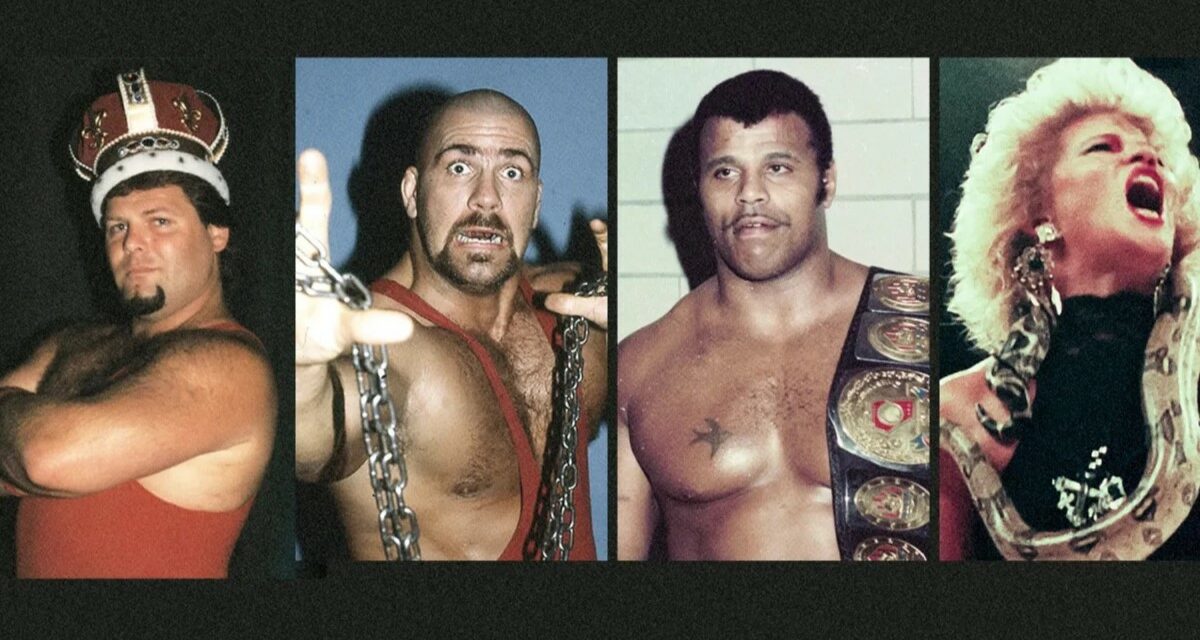 In its first season, Tales from the Territories sought to present stories from wrestling’s past in a far less provocative manner than its predecessor, Dark Side of the Ring. In that, they were successful. Where the season had its ups and downs was in presenting repetitive stories or featuring mere chronological re-tellings of a territory’s history. This final episode, titled “Mid-South: Bullets, Blades, and Bar Fights,” had a nice mix of stories with a personal touch, though once again we have more angry fans and pranks as part of the menu.

Your guides tonight are Jake Roberts, Ted DiBiase, Jim Ross, and Michael Hayes — why wasn’t Hayes on the panel for the WCCW show? They had Jerry Lawler on twice to start the season. Hayes opens by suggesting that “People don’t understand how mafioso it was like” back in the territory days. Bill Watts is looked back upon by everyone at the table as tough-as-nails, bullying, and abusive … but someone who would teach you all the ins and outs of the wrestling business you could hope to learn.

The first tale told in detail has Hayes retelling of his maybe accidental, maybe purposeful blinding of Junkyard Dog with caustic hair removal cream. Everyone around the table agrees that the selling of the angle on all levels is what made it work. JYD played the blind man even at home (at least until the house’s curtains were drawn), the promotion played it heavy by telling fans that JYD’s career was over, and Hayes relates one more story for this season about a fan who was crazy with passion and stopped by police before he could carry out a plan to shoot him — with a bullet that had “Freebird” engraved on it, no less.

Mid-South is categorized as a place where many future stars came to pay their dues, with Watts demanding his wrestlers win any fight with overzealous fans that want to take a run at them — or they won’t wrestle for him anymore.

Roberts talks about a night of drinking in Jackson, Mississippi with Jim Duggan, where “Hacksaw” is getting beat up early in a fight and having trouble getting his hands on his opponent. Roberts is sweating it out, thinking that if Duggan loses then he has to be next — but the other guy makes the mistake of biting Duggan’s thumb which lets Jim close enough to land one haymaker and that’s the end of that.

Ross speaks next of wrestler Jerry Brown’s beef with Bill Watts over wanting more money, to the point that Watts released him from the promotion. Brown stalked Watts’ house, mailed him a ticking clock (a sort of bomb scare), and finally fired gunshots randomly into Watts’ house. Ross says “as the legend goes”, Brown ended up with a shotgun held by Bill in his mouth, scaring him off for good. Ross, for his part, believes the legends.

DiBiase is up next, looking back on his heel turn and pitching his turn to booker Ernie Ladd. He turned on JYD to take the championship and the path of the rest of his career took shape. Ross then looks way back to when he started, working for Leroy McGuirk and taking on the job as Leroy’s driver (McGuirk was by this point blind). Ross is also put in an awkward spot in the car when Leroy asks if his daughter Mike (later an announcer for the WWF) is dating DiBiase — which he most definitely wasn’t in favour of. Leroy was ready to shoot DiBiase until Ross called for help and Watts diffused the situation.

Roberts tells the tale of working an angle with Muhammad Ali when facing off against the Snowman at the Superdome in 1985, calling it the highlight of his career, bar-none. Because Roberts was the heel and Ali was in the babyface corner, Jake hardly ever crossed paths with him until the night of the match. During the match, Roberts took three punches from Ali and stayed on his feet, which infuriated Watts, but amused Ali who came to shake Roberts’ hand after the match.

Some road stories follow with Hayes talking about his fellow Freebird Buddy Roberts peeing on his tag partners on the side of the road and tricking Terry Gordy into drinking beer (which was actually Roberts’ urine). Gordy sets his sights on revenge by loading up Robert’s bag with all sorts of disgusting stuff (including a dead possum).

The usual end to the series’ episodes comes about with Vince McMahon’s buying up of TV time, territories, and gathering of wrestling talent. For the first time this season, though, the story of an unofficial meeting of the NWA to talk about ways to combat McMahon is told. Ross was there, and was in the bathroom when he hears somebody — he doesn’t remember names or doesn’t want to say any — suggest they just kill Vince.

Ross says that Watts left the meeting unimpressed, saying that those promoters couldn’t come together with any kind of cohesiveness. Instead, Mid-South Wrestling re-branded itself as the Universal Wrestling Federation, which sought to expand the audience but merely staved off the inevitable for a a little longer. Watts sold his territory to Jim Crockett Promotions and another of the traditional wrestling territories was gone.

That’s a wrap on Tales from the Territories for now! Stay tuned to SlamWrestling.net for news about a potential second season from the show.

Slam Wrestling’s Dark Side of the Ring story & review archive