Tyrus ushers in a new era of NWA POWERRR 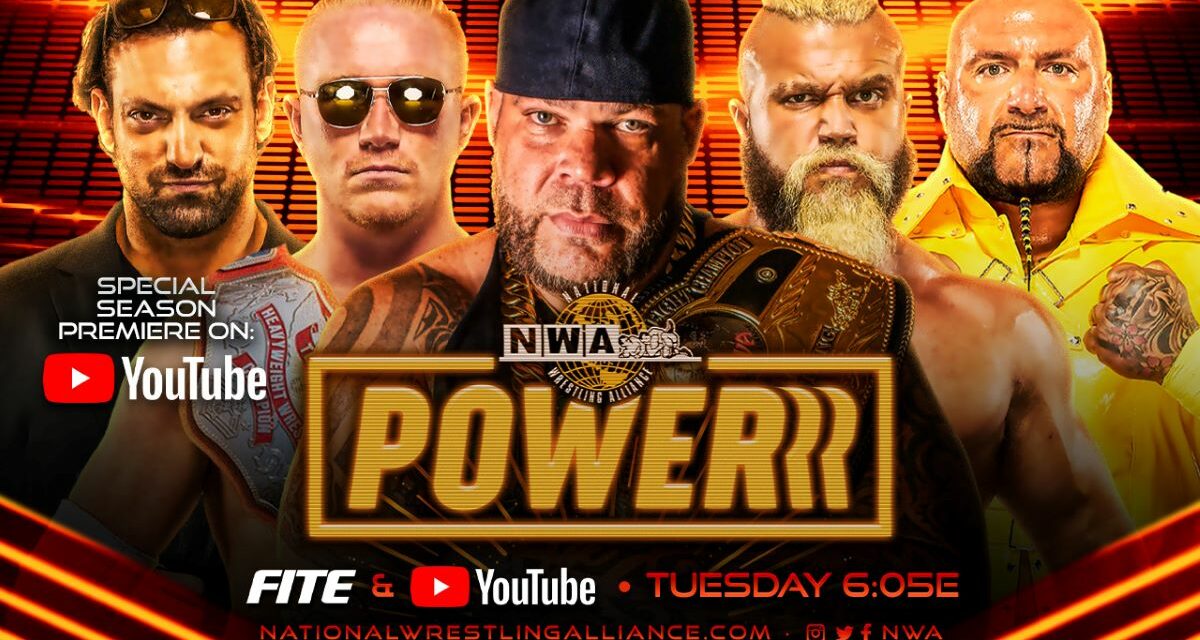 As the big man Tyrus says, we’re just living in his world.  That is pretty clear since his win at Hard Times 3, and he wants to usher in the  IdolMania Sports Management Era into the National Wrestling Alliance.  Whatever your feelings on the big man(which John Powell did a great job in his Mat Matters piece), we will see the champ speak his mind and we’ll also have Kratos finally get his hands on The Most Feared Kratos.

We head to the Frederick J. Sigur Civic Centre in Chalmette, LA. Kyle Davis is in the ring and he brings out Tyrus. All of IdolMania Sport Entertainment comes out, and Tyrus, Cyon and Clearwater pose with the three biggest prizes in the NWA. 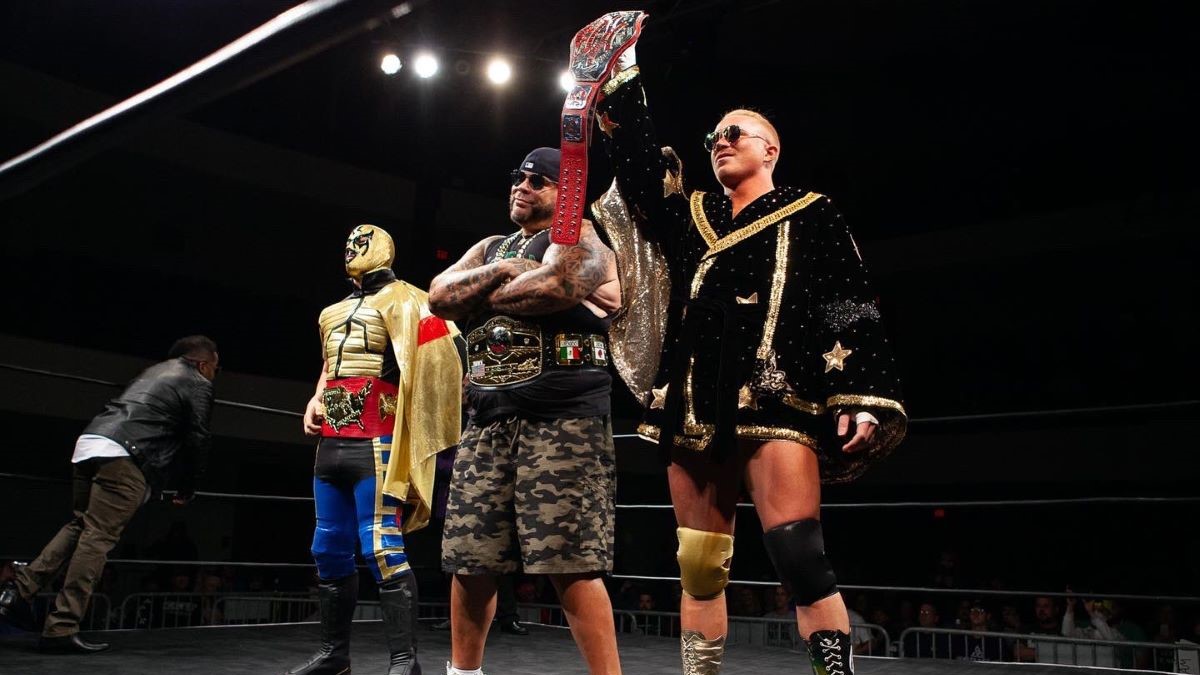 Idol calls Davis, “Kyle Doofus” and crows about the winners in his stable. Tyrus talks about surrendering the NWA Television title to get a chance at the Ten Pounds of Gold but gives props to the “Golden Boy” for bringing the belt back home. Idol is still on a tirade that this is all the championships, and the most success, that anyone in Louisiana will ever see in their lifetimes. As for Tyrus, he’s just going to wait for people to step up to challenge for the belt and can include Trevor Murdoch or Matt Cardona, or others like the Thrillbilly(?). But again, it’s his world and we’re living in it.

But let’s get to the First Match of the night, and it’s for the… 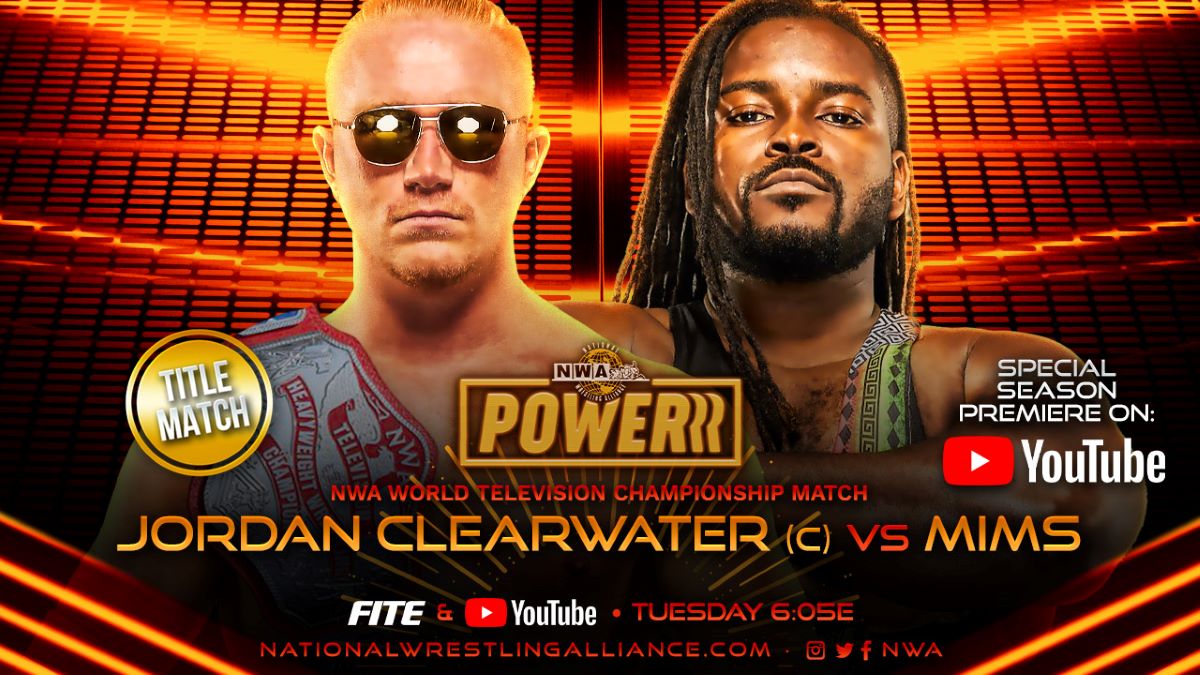 As per the rules (which seem to be loosely enforced) the match will be contested within the 6:05 time limit.  If time ends, It will be considered a draw.  As for Mims, he is intense and wants another bite at the apple, since securing the number one spot.  He goes to lock up with Clearwater, who keeps ducking away from his offense (cowardly or tactical, we know how the Golden Boy is leaning).  Clearwater offers a test of strength, and Mims shoves him down.  Clearwater tries to leave but Mims grabs him and headbutts him hard.  As Clearwater is reeling, Mims goes back on the attack and gets poked in the eye at 4:00 and then The Golden Boy gets a backdrop.  He starts to pick apart Mims just to keep the clock ticking, but then he starts throwing elbows at Clearwater, then a kick to his stomach and he throws him hard to the mat to cover for a two count.  Clearwater responds by whipping Mims hard to the corner but he fights back.  Once again, Clearwater rakes his eyes and nails a suplex at 1:45 to cover for a two count.  Mims is thrown to the ropes and lands a sunset flip at 1:08 to cover for a two count.  Then Clearwater fires back with a clothesline for a near fall and 1:00 remains on the clock.  Mims digs deep and fights back, but Clearwater delivers a flash Midas Touch that knocks him out cold. He goes to cover and then the bell rings.  Therefore the decision is a…

No Contest as it goes to a Draw, But Still your NWA Television Champion:  Jordan Clearwater

Clearwater is all smiles as Galli explains that this is considered a successful title defense even though the time ran out, and this was win number one of the “Lucky Seven” rules of the Television title. 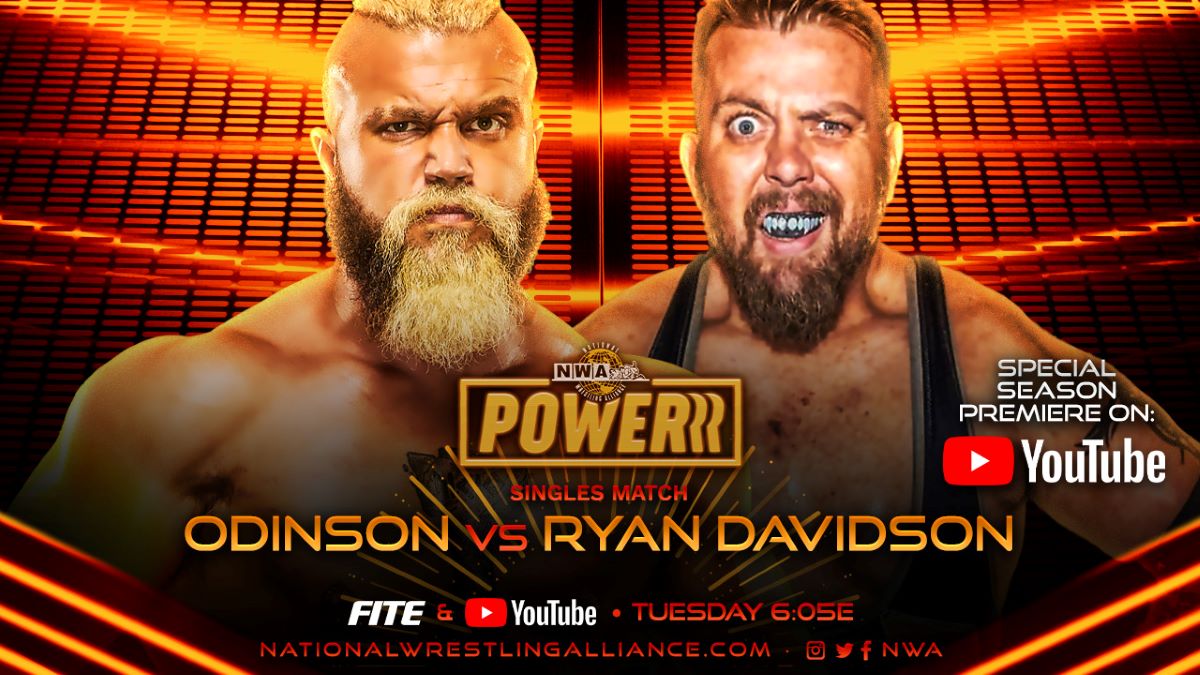 Davidson is part of Wildkat Sports Wrestling, which helped put on the event (as I spoke to Luke Hawx in our interview).  Davidson was once the Wildkat Sports heavyweight champ for over 900 days, but he faces a big test with the Asgardian (who’s it’s worth noting he’s getting a nice babyface pop from the fans.  Can’t imagine why).

This is a case of Asgardian power versus Grizzled savvy, but the match favors the Asgardian who gets a boot to a clothesline and then follows with a sliding clothesline to Davidson for a two count.  He givesAsgardian (European) uppercuts to Davidson in the corner and then attempts a tackle in the corner.  Davidson evades and his momentum goes through and Odinson’s shoulder connects with the ring post.  The Grizzled one takes advantage with an atomic drop to a scoop slam and finishes with an elbow drop to cover for a two count.  He nails a DDT to Odinson for another two count.  Davidson continues his offense with a snapmare and keeps targeting the bad arm/shoulder of the Asgardian, but Odinson fights up to land a standing dropkick but can’t capitalize as he’s feeling the effects of the bad arm.  Now Odinson charges with a running Asgardian uppercut and then attempts a torture rack but Davidson escapes the submission.  Davidson backs him in a corner and rushes but Odinson gets a boot up and then goes up top for the flying Asgardian Uppercut to another torture rack but Davidson hits his bad arm to release.  Odinson charges and Davidson nails him with a crisp powerslam for a two count.  Davidson picks him up to a fireman’s carry, but Odinson shoves him and sends him to the ropes where the Asgardian Pounce ends it for the three count.

Your Winner via Pinfall:  Odinson

May Valentine is backstage with Aron Stevens and she asks her “babe” why he’s wrestling if he is retired.  Stevens then goes on a tirade, saying the NWA is forcing him to wrestle, or else his license will be revoked as a wrestling manager.  He’s upset but will take on the challenge that “Kruh-toes” poses.

Now Valentine is with the Country Gentlemen, AJ Cazana and “Adorable” Anthony Andrews, and she congratulates them on their upcoming NWA USA match with The Fixers for the US Tag Team Titles.  Andrews has the best line as he says if you’re having fun, it doesn’t feel like work, and the Gentlemen are gonna have fun beating The Fixers for the titles this Saturday.

But let’s head ringside for the Main Event… 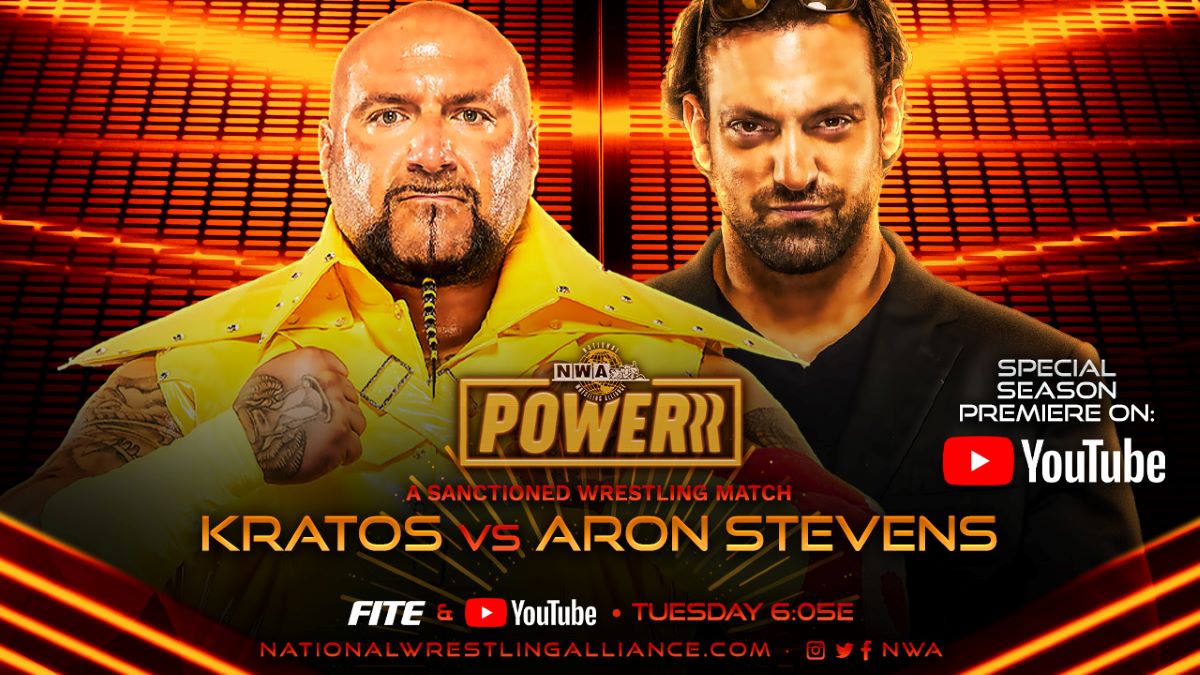 Aron Stevens vs “The Most Feared” Kratos

The reason this match came about is that after Stevens tried to sabotage his own Question Mack’s…err, Mark’s unmasking at Hard Times 3 NWA management mandated it’s time for him to face the repercussions by facing his former partner and friend in one-on-one competition or have his manager’s license revoked.

And now you know the rest of the story.

Stevens comes to the ring in street clothes, grabs a mic, and cuts the music.  He says he’s here under official protest and wants the fans to shut up and give no credence to his opponent tonight, and that prompts the New Orleans faithful to boo vociferously.  That brings out Kratos, and for some reason, Davis announces him as “The Most Swagged.”  I did a Google search on what it means in the Urban Dictionary and I truly wished I hadn’t.

Seriously, don’t look it up.

As Steven gets prepared and fidgets with his black glove, the ref makes an announcement that he must lose the glove or he is disqualified.  Stevens throws a fit but finally agrees.  He takes off his glove to reveal…a medical glove. That prompts commentary to wonder why he needed a medical glove, leading Velvet Sky to wonder what sort of medical exam he’ll do in the ring.

(Author’s Note:  if it’s along the same thing I saw online, I truly wish I never tried to combine the images, and Sky didn’t help either. )

Stevens gets back on the mic and says he does not have a wrestling license, and bids everyone a fond adieu.  As soon as Kratos’ back is turned, he blindsided him and then realizes his wrestling license is good for two years, so never mind.  Kratos uses that time to flatten Stevens with a clothesline and just beats the holy hell out of him in and out of the ring.  He then toys with Stevens and delivers with a suplex that launches him across the ring.  Before he can continue, two masked men attack Kratos.  One of Obviously Rodner Mack, but the other is a little harder to figure out until you realize it’s Marshe Rockett in a mask.  Eh, I’ll buy it.  They beat down Kratos until the Question Mark II enters the ring for the save, but it isn’t long before the numbers game catches up. Stevens loads the black glove and drills Kratos to knock him out cold. Then the masked men deliver a double flatliner to Mark II, as they celebrate their victory with Stevens basking in The Power of Douchenozzlery™ as the show goes to credits.

Not a bad episode, but it was a short one.  I like the show’s small bites to establish the new regime in the NWA, and Clearwater/Mims was a great match and firmly established what type of heel he could be with the belt.  the whole Question Mark/Stevens/Kratos thing works because Stevens knows how to stir the pot, and this feud has some legs.