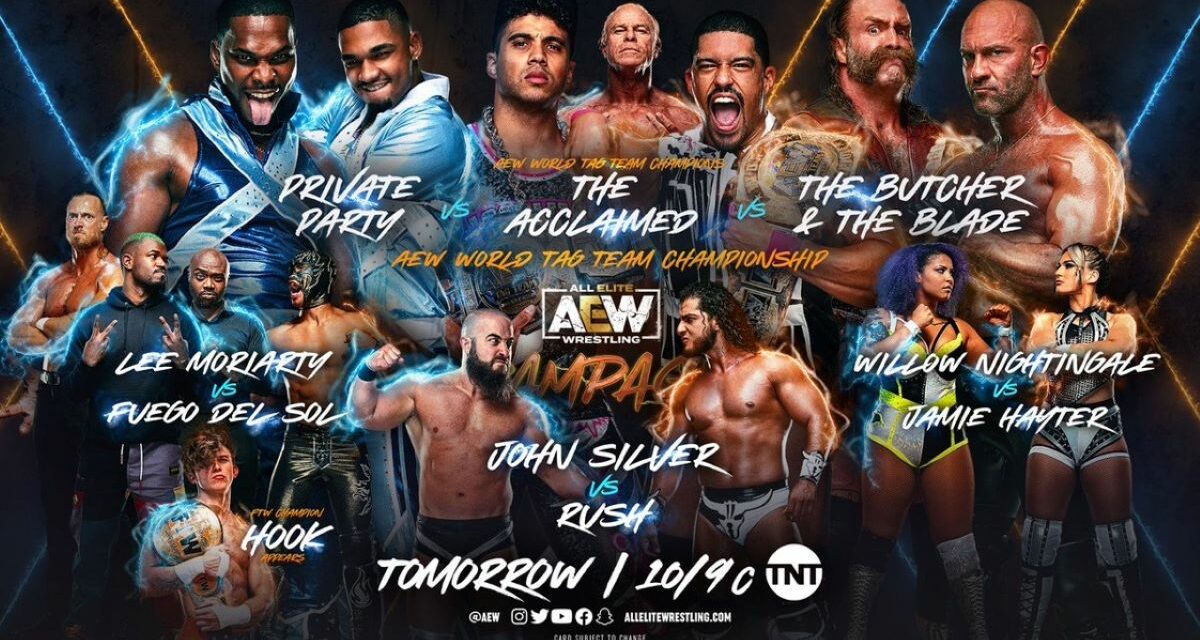 It’s Friday night and you know what that means? No, not to celebrate the life of Antonio Inoki (rest in peace).  It’s time for AEW Rampage, and lately, La Faccion Ingobernable is causing all sorts of problems for The Dark Order.  It’s now escalated to the point that John Silver is looking for a challenge in the main event tonight against “El Toro Blanco” Rush.  It’ll be interesting to see if “The Meat Man” grinds “El Toro Blanco into hamburger, and I never thought I would write those words in a sentence.  But, hey…here we are.

As we head to the Liacouras Center in Philadelphia, PA, we are joined at commentary by Excalibur, Taz, Tony Schiavone, and Jim Ross.  They have the call for the First Match of the night for the… 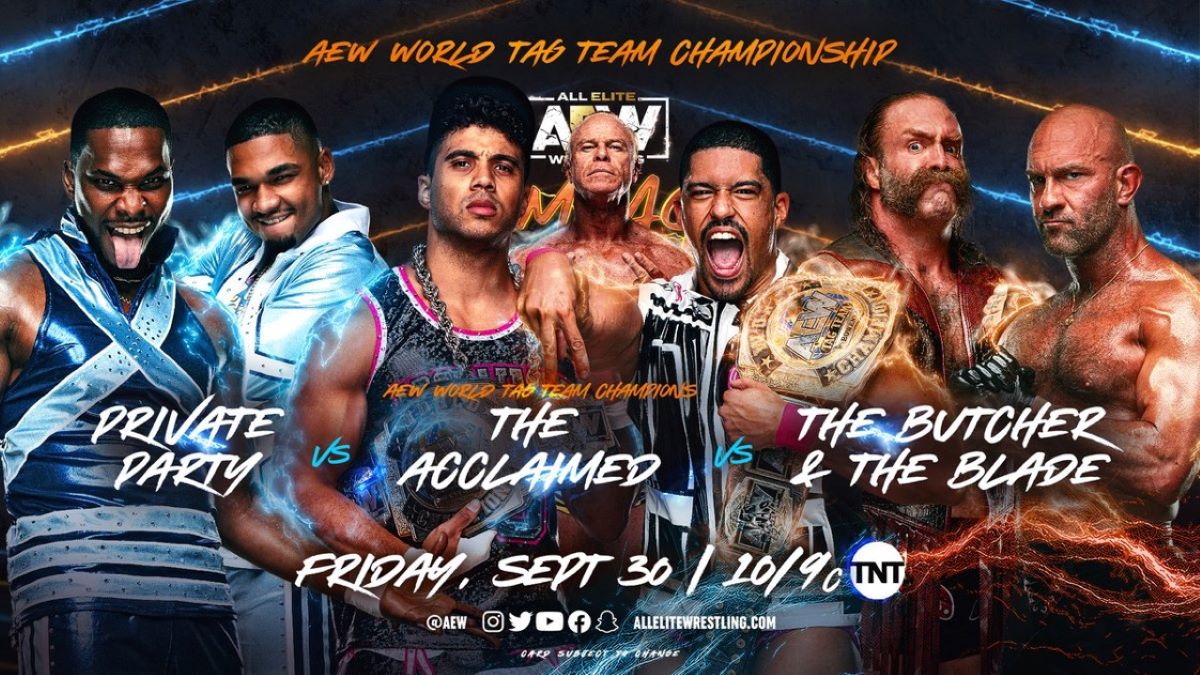 First of all, folks, you have not lived until you hear an arena of Philadelphians chant, “Oh, scissor me, Daddy!” to the tune of Seven Nation Army.

Bowens and Kassidy start out, and both go for quick one-upmanships.  Now a tag to Caster and he takes control of the situation.  Tag back to Bowens, and after a quick session of, “Scissor Me, Daddy Ass” they nail the backstabber/neckbreaker combo to Kassidy.  Quen tags in but The Acclaimed double team and Caster gets a leg drop to his inner thigh to incapacitate him.  But it isn’t long before The Butcher and The Blade enter and Blade drags Quen to his corner and tags himself in, and they clear out Private Party from the ring.

From there, they isolate Bowens in the corner, and during Picture in Picture they make him an Acclaimed in Peril.  Caster tries to tag in but Bowens is just kept at arm’s length.  Bowens manages a desperation thrust kick and crawls to his corner for the hot tag, but Butcher knocks out Caster from the ring apron.  Quen is back on the apron and blind tags Bowens and he and Kassidy light up Butcher and Blade with their trademark aerial maneuvers, and they take a page from their mentor Matt Hardy and land Poetry in Motion to The Butcher, followed by a  neckbreaker/Swanton combo to cover but Caster breaks the count.  Butcher sends Castor out again and throws Kassidy to Blade who lands on his knee, and Blade follows with a gutwrench Doctor Bomb to cover but can’t capitalize.  The match devolves into a Pier Six brawl and Caster dives to the outside on all the combatants.  With Blade left in the ring, Bowens hits The Arrival and Caster follows with the Mic Drop.  Bowens pins Blade and that means…

Le y Nair with The Firm. The Gunns talk smack on the ROH tag team champions, FTR.  They want the AEW tag titles, but they’ll settle for their belts. Top Gunns, out! (heh)

Everyone wants a shot at the AEW World Tag Team Champions #AEWRampage pic.twitter.com/S8iymQwVEq

Now Nair is with Jade Cargill and her Baddie (whose name escapes me, and yeah…I did pregame a bit for this show)  Cargill knows that rapper Trina anointed her “The Baddest Bitch” but it makes no difference since she hasn’t seen any competition. In comes Vicki Guerrero with former AEW Women’s champion Nyla Rose and Marina Shafir in tow (which proves my pregaming didn’t go overboard; the other Baddie is just that forgettable).  Rose says she’ll take up Cargill on her challenge for her TBS title, and the champ agrees…but only on her time.

This looks to be a fast-paced match filled with hard-hitting action, and I will spend as muchAAHAHAHAHAHA!!!  Oh, Gods!  I couldn’t finish that with a straight face.

Seriously, you know what that means when I have to recap a squash match, folks.  Time for a Haiku in Review™:

Del Sol and flattens him to

Your Winner via Submission:  Lee Moriarty

After the match, Morrisey chokeslams del Sol, and Firm is looking to be…on firm ground.

(Hey, you try coming up with something better!)

Nair is backstage with Adam Page, Evil Uno, and “10.” Page is looking forward to his upcoming match with AEW Champion, Jon Moxley, but then Andrade El Idolo and Jose The Assistant interrupt.  They are fawning over 10, and El Idolo challenges him next week on Rampage and wants him to put his mask on the line. He agrees but says if he wins, then El Idolo will leave AEW for good.  As we ponder the ramifications of a mask versus career matchup, Stokley Hathaway and Ethan Page talk to La Faccion about Private Party, and The Firm wants them to get their boys in line since they still seem to be tight with Matt Hardy.  I must’ve missed something, or the Rum Cola in a can I’m now having just kicked into a new gear in my frontal lobe.

But before more brain cells get lost, let’s turn to the women as out next matchup is… 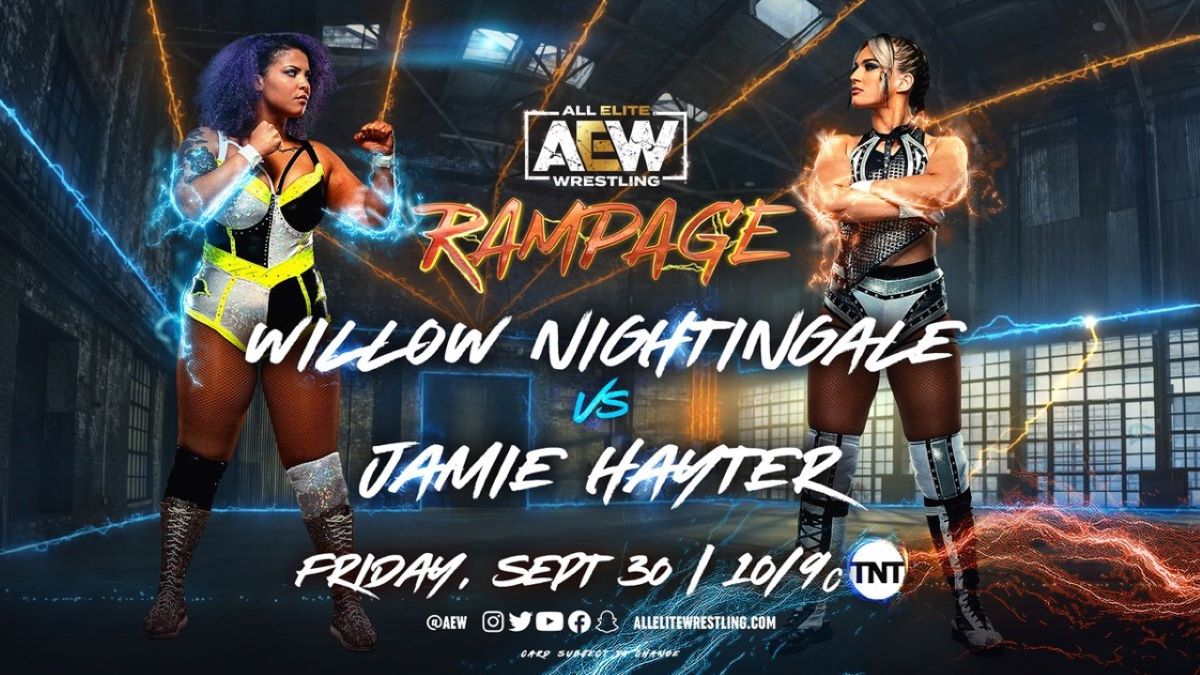 This started as a result of Nightingale and Hayter coming to blows during the lumberjack match on AEW Dynamite this past Wednesday that you need to read up on.  As the bell rings, Nightingale starts whaling on Hayter and the Southampton striker is unable to topple the Babe with The Power.  A senton followed by a low crossbody by Nightingale to Hayter only garners her a two count.  She cartwheels away, but  Hayter catches her with a big boot and she takes over with running knees to Nightingale in the corner.  During Picture in Picture, Hayter just waylays Nightingale and gives her no breathing room to recover.  Hayter is still beating her down and then that leads to..

Ads (Sweet Zombie Jesus, was that even necessary?)

We come back from the break, and Hayter continues the offense with a uranage into a backbreaker to cover for a two count.  Nightingale comes out of nowhere with a desperation Pounce that has Hayter falling out of the ring.  Nightingale goes out to send her back in, meanwhile scaring off Rebel and Baker in the process.  Hayter briefly gets back the upper hand, but soon Nightingale lands with a DVD for another two count.  Nightingale goes up the top turnbuckle for a moonsault, but it gets blocked by Baker who grabs her leg.  Hayter uses the distraction to get Nightingale with a German Suplex from the turnbuckle followed by a short-armed clothesline to cover for the pin and the win.

Your Winner via Pinfall:  Jamie Hayter

There’s a nice promo for the new bromance called WarJoe.  It’s no Bros which is out in theatres, but then again…what is?

This next segment deserves only the briefest of descriptions involving Ryan Nemeth, so here it is:

Not Ziggler™ cuts a promo running down Philly. Hook interrupts and clotheslines Not Ziggler™ out of his boots, all the while his entrance music played throughout beatdown, kinda like New Jack beating down someone to the tune of Natural Born Killaz.

After that, The Trustbusters come out with an invite to Hook and he walks by.  Riveting stuff.

Wait what is happening?! #AEWRampage pic.twitter.com/B4iqmsV91y

Swerve Strickland was recently at a hip hop fest, but he and Keith Lee have their eyes on reclaiming the tag belts sooner than later.

There’s a promo for when Page and Moxley will collide next, and I will look forward to this matchup since this won’t want me to Go 2 Sleep.

Mark Henry is now with John Silver and Alex Reynolds, and Rush has El Idolo nearby.  He asks both men about how La Faccion wants to poach 10 from The Dark Order. Silver says it’s creepy and won’t affect Dark Order since they are a family, and The Meat Man will beat Rush.   Idolo says La Facción will show the power. Rush isn’t here to talk, but to fight. But hey, tranquiló. 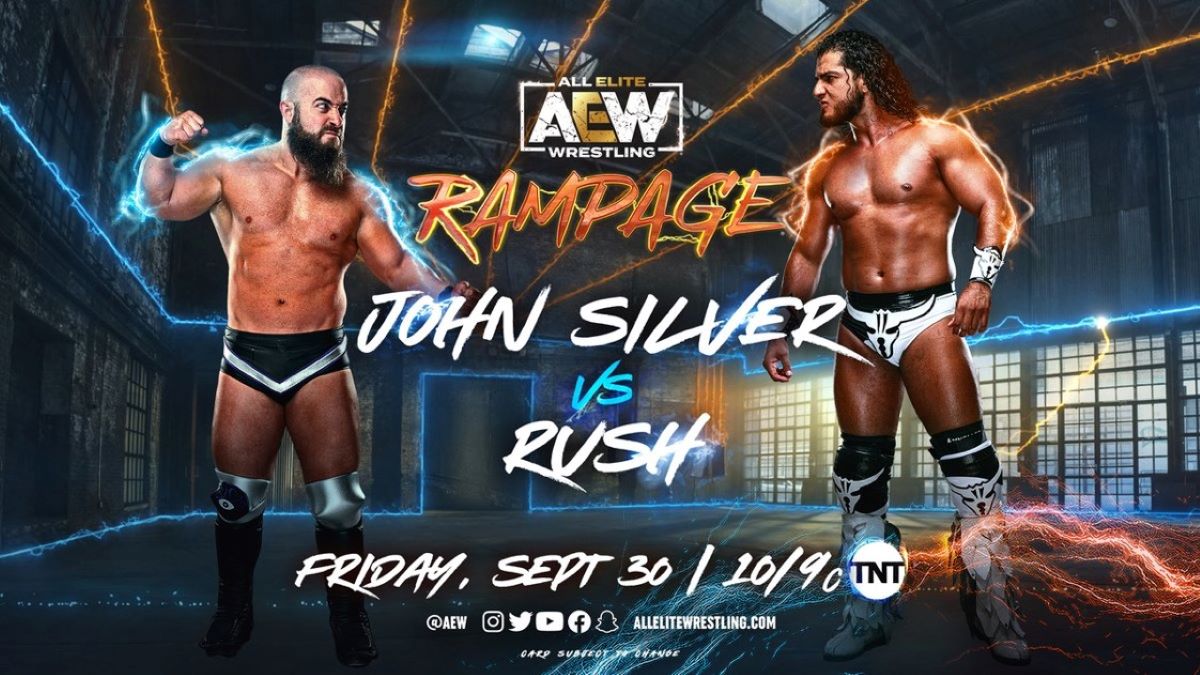 John Silver (with Alex Reynolds) vs. Rush (with Andrade El Idolo and Jose The Assistant)

(Author’s Query:  Why is Silver billed as “The Meat Man?”  “Johnny Hungee” I can get, but that moniker conjures images of Shawn Stasiak for some odd reason.  Am I the only one?  Message me in my email and put “Meat Man” in the subject so I can hear your thoughts.  I’ll reprint whoever has the snappiest comeback to this subject)

As the bell rings, Silver gets the better of El Toro Blanco and taunts him with Tranquilo.  By the way, enjoy this GIF/meme for the next week or so:

This might be our new favorite GIF #AEWRampage pic.twitter.com/hl8xx9jOfY

Rush comes back and drops Sliver to the mat and chops away at The Meat Man (still feel weird typing that).  He gets a dropkick to the back of Silver, then sends him out and rams him into the guardrails.  The ref tries to get control, and Rush throws Silver back in the ring and sets him up in the corner.  He goes for the Bulls Horns but pulls up for a kick, and now he’s showing how Tranquilo he is as we go to Picture in Picture.

He sends Silver out of the ring, and El Idolo takes liberties softening up Johnny Hungee. The ref starts to count out Silver, and he barely makes it back in the ring, but then Rush comes out of the ring and proceeds to slam his head onto the timekeeper’s table.  They battle and forth outside, and then back in the ring Rush is back in the driver’s seat.  He attempts a senton that misses and Johnny Hungee sends him into the corner and he unleashes splashes to Rush and follows with a deadlift German Suplex with a bridge to cover for a two count.  Silver also catches Rush in a powerbomb for another two count.  Rush counters with a thrust kick and a fisherman’s suplex for a two count of his own.  Both unload with forearms, but Silver comes out on top with a brain buster for just a two count.  Jose tries to distract him, but Reynolds takes him off the ring apron by force, but El Idolo is on the other side to get in Silver’s head for Rush to take over.  Rush then lands a forearm to his back, and finishes Silver off with The Bulls Horns to cover for the one, two, and three.

Your Winner via Pinfall:  Rush

After the Match, Silver and Reynolds get beaten down by El Idolo and Rush, but Ten and Evil Uno rush from the back to make the save.  That brings out The Butcher and The Blade to join the fight, but Adam Page runs out to evens the odds. He faces off with Rush, who ducks out of the ring. Jose the Assistant is in the ring, and Page shrugs and makes him take the Buckshot Lariat as the Philadelphia crowd cheers on until the show fades to black.

A mostly solid show, but I would have liked the card to have been reversed so that Rush/ Silver started, and then the tag team three ended the show.  The only things I did not care for were the squash match between Moriarty/Del Sol and I do not care for Not Ziggler™

Otherwise, see you in seven!